What HP, NASCAR and wildlife have in common?

BARCELONA, SPAIN – In case you haven’t noticed I was in Barcelona, Spain for the HP Discover conference this week. Covering the high tech industry you get the chance to see a lot of “cool” things, but rarely do I see something that is “cool” to do with technology.

Most of the time the case studies we report on are for banks, governments or some big company that makes drugs. On day two of the HP Discover conference I was introduced to Conservation International. Their booth at the show floor was truly unique as it was covered in grass with the odd flat-screen TV. 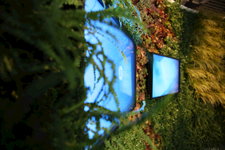 Conservation International’s mission is to bring the scientific communities together and empower them to care for nature and biodiversity for all humankind.

HP is helping Conservation International accomplish it mission by supplying them with not just technology but with big data analytics to track the progress of endangered species and habitats.

The story did not have a channel angle so CDN sister publication IT World Canada published it.

You can read it by clicking this link: Environmental group uses analytics to protect nature

What I found really interesting about the entire partnership was that HP actively sought Conservation International out. This is what makes this particular case study “cool” in my opinion. In most case studies I do the customer searches out the vendor or the solution provider.

But HP really wants to show off what it can do technology wise in this style of IT the company is promoting.

And just in time for HP’s 75th year anniversary in 2014. Can you imagine if Conservation International saves a species from extinction? For example, Dr. Sandy Andelman, vice president of Conservation International told me that birds in the U.K. are declining by 60 per cent. The Turtle Dove, which was made famous in the song “The 12 days of Christmas” will be extinct in seven years. Andelman said that the rapid decline of the wildflower has led to this.

Here’s the thing; Conservation International did not know that until recently because the scientific community did not share research and the data that was available was at least five years old.

With the new HP technology, Conservation International can now track these birds and other wildlife more accurately and on a consistent basis. Andelman said today scientists have a baseline to start from and are communicating and share information because of the big data analytics available.

I did not know that the Turtle Dove was in such dire straits and I am pulling for Dr. Andelman and the rest of Conservation International to save the Turtle Dove and all the other animals that are endangered.

Everyone I spoke to at the conference thought the same thing I did. This was a “cool” story to write about. But wouldn’t it be cooler if this type of big data tracking solution can be replicated elsewhere.

Well it has. And, it another odd place: NASCAR!

Martin Risau, senior vice president and GM, HP Information Management & Analytics Partners, told me another case study story on NASCAR racing. He said NASCAR and Conservation International has a similar problem. They both could not find a baseline to start from. What HP is doing with NASCAR is basically the same as Conservation International. They are providing technology to help this business and the non-profit a gain insights.

NASCAR wanted to know what their fans were thinking and saying on social media during rain stoppages.

“The biggest enemy of NASCAR is rain. Fans at the race track can’t go away, but the people watching it on TV sure can,” Risau said.

Since most of NASCAR’s money is made from advertising it’s important for the viewers to tune in.

NASCAR saw the TV viewing engagement go straight down during rain delays. Before going to commercials NASCAR posed a question to their fans: “What driver would you like to get reaction from?” The analytics they tracked was in real time and NASCAR was able to get a camera crew to the driver fans want to hear from. While tracking on the social media answers to the questions, NASCAR also learned that fans found the machines used to clear up the rain on the wet track odd, confusing and interesting.

The NASCAR organizers produced a long video feature about those machines. The next time a race was stopped because of rain the fans got treated to expose on them. By the way, those machines are called the Air Titan.

“With big data analytics you can have repeatable situations,” Risau said.

Two quick hits before I go. CDN has learned from a source that Lexmark Canada is making some stuff cuts and Mark McCullough, the director of marketing for Lexmark Canada is one of those executives impacted. We will have more on this developing story.

CDN also wants to pass along its congratulations to Andrew Eppich who was recognized with an award as the top Enterprise Group channel chief in HP Americas at the Discover Conference in Barcelona.

Paolo Del Nibletto
Editor of Computer Dealer News, covering Canada's IT channel community.
Previous articleAmazon to use drone strikes for delivery
Next articleSAP issues a business challenge to the channel