90% of Canadian businesses implementing digital transformation, relying on partners to do it

There’s a lot for the channel to like in MNP LLP’s comprehensive report on digital transformation.

For starters, the Canadian consulting firm discovered that the vast majority – almost 90 per cent – of Canadian businesses are either planning for or already experiencing digital transformation over the next 12 months.

They also feel good about it: 77 per cent reported feeling “somewhat” or “very” optimistic about about the subject. 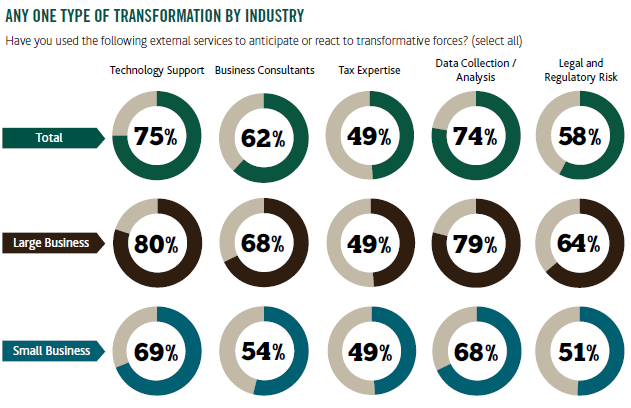 “Reacting in fear or frustration — or not reacting at all — is sometimes how companies deal with change,” MNP national technology solutions director Scott Greenlay said in a Feb. 21 statement. “A more successful way is to find external expertise.”

Released Wednesday, MNP’s “Capturing the Change Wave: How Canadian Businesses are Transforming” report is based on a survey of 1200 Canadian business leaders across multiple industries, including energy, real estate, manufacturing, finance, and health, that Ipsos conducted on MNP’s behalf in October 2017. It defined workplace technology as online skills marketplaces such as Upwork and productivity tools such as Skype.

It found that 91 per cent of large Canadian businesses (defined as companies with 100 employees or more) and 81 per cent of small Canadian businesses (those with 99 employees or fewer) were currently experiencing or anticipating tactical, operational, or strategic digital transformation over the next 12 months, with 83 per cent reporting at least one technological advancement currently underway at their organization.

However, the report also uncovered few specifics, with only 32 per cent of respondents incorporating workplace technology into their operations; only 28 per cent using business intelligence or analytics; and 93 per cent facing at least one barrier to digital transformation (42 per cent related to budget, 32 per cent to time and staff, and 27 per cent to skills and expertise).

“When it comes to data there will be a growing divide between the haves and the have-nots,” Greenlay said. “It’s imperative for Canadian businesses to leverage these technologies so they can compete.”

In addition to gauging respondents’ interest in digital transformation, the survey also divided reported digital transformation projects by industry and type, with tactical, operational, and strategic change being implemented at relatively equal levels, but with greater frequency in some industries than others. “Canadian businesses have long been criticized for being digital laggards,” MNP senior vice president of consulting Trent Bester said in the Feb. 21 statement. “Our results indicate the start of an important shift but… in terms of technological readiness and digital competitiveness, Canada is languishing behind.”