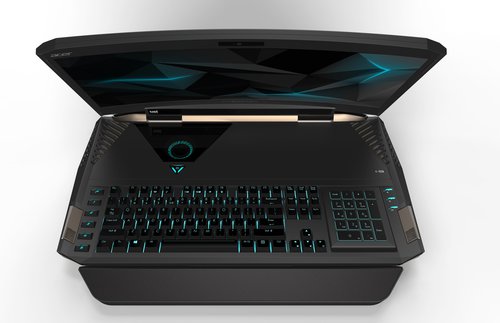 Acer is claiming a first among laptop vendors with the announcement of the forthcoming launch of the Predator 21 X gaming laptop. The first? The laptop comes equipped with a curved screen.

The new Acer Predator 21 X, which will begin shipping in January 2017, is the latest flagship product in the vendor’s line of gaming notebooks. Two interesting additions to the technology are the aforementioned 21-inch IPS curved screen and Tobii eye-tracking technology, which Acer noted in its announcement provides for a greater immersive gaming experience.

The Predator 21 X also has a mechanical keyboard featuring Cherry MX switches with customizable RGB backlight settings for each key. Acer is also sporting a unique design for the numeric keypad, which has the ability to flip over to be used as a Precision Touchpad.

The weight and price tag of the Predator 21 X are still unknown at this time.

In addition to the announcement of the new flagship Predator, Acer also announced a refresh of the Predator 15 and 17 gaming notebooks. The laptops are equipped with new GPUs with NVIDIA Pascal architecture, with up to NVIDIA GeForce GTX 1070 graphics cards. Both notebook lines now also run Windows 10. According to Acer, the refresh makes both the Predator 15 and 17 VR-ready.

The new Predator 15 and 17 notebooks will begin shipping in September.

Chris Talbothttp://www.christalbot.com
Chris is a freelance technology writer that resides in the Northwest Territories. A former editor at ITWC, he now spends his time as a scribe for various tech publications while having an appreciation for the finer things in life - namely beer and cigars.
Previous articleNutanix sets the record straight on removal from Cisco partner program
Next articleHP changes PC aesthetics with Pavilion Wave, Elite Slice desktops

How 3D printing is changing the sports clothing industry – Tech in...

Is there too much tech in sports? – Tech in Sports Ep....