Another slim smartphone from Chinese vendor 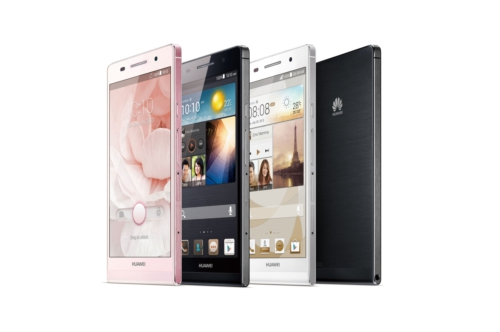 Huawei claims to have unveiled a slim smartphone measuring 6.18mm.

Yu added that these devices build on the Ascend P series of fashion smartphones.

The Ascend P6 weighs about 120g making it small enough to slip into pockets and clutch bags.  Supposedly the Ascend P6 has “MagicTouch” technology for enhanced screen responsiveness even when wearing gloves, the company said.

Huawei also said that the Ascend P6 is targeted at a group of customers called “selfies”, people who take self-portraits and share them with others. The smartphone also features an 8MP rear-facing BSI camera with F2.0 aperture and 4cm macro view. This feature also enables 1080P full HD video recording and playback.

Huawei’s proprietary IMAGESmart software is targeted at the novice photographer and can help them with contrast and colour enhancement, auto scene recognition, object tracing focus, and instant facial beauty support.

Huawei’s multi-screen AirSharing capability connect to a range of devices for documents sharing.

The Ascend P6 is available in black, white and pink with matching colour cases. It will begin shipping to China from June and the plan is to go to other markets after the launch.

For more on developing a mobility strategy, view this episode of CIO TV: OCAD: The business case for mobility in Canada

CDN Staffhttps://channeldailynews.com
For over 25 years, CDN has been the voice of the IT channel community in Canada. Today through our digital magazine, e-mail newsletter, video reports, events and social media platforms, we provide channel partners with the information they need to grow their business.
Previous article
It’s the Internet of Everything — including profit potential
Next article
Microsoft partners will get Surface tablet deals at WPC