The MeMO Pad HD 7 is a 7” tablet powered by a quad-core processor and 1GB RAM with a 1280 x 800 IPS display, and 1.2-megapixel front camera and an optional 5-megapixel rear camera. The tablet measures .4” thick and weighs 10.6oz, with a lithium polymer battery that Asus claims is good for up to 10 hours playing 720p video. Models are available in four colors — black, white, pink and green. It has 16GB of storage and a MicroSD card slot, and comes with 16GB of clour storage free for one year. It also has Asus WebStorage Office, so users can view, create, edit and share Microsoft Office documents online. 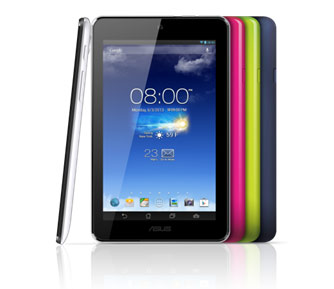 Designed as a multimedia device, the MeMO Pad FHD 10 is a 10” tablet featuring the new Intel Atom Z2560 processor, a 1920 x 1200 Full HD IPS display and Asus’ SonicMaster audio technology. It uses Intel’s hyper-threading technology for improved graphics performance and increased energy efficiency, and has a 1.2-megapixel front-facing camera and a 5-megapixel rear-facing camera with autofocus.

Measuring .3” thick and weighing in at 1.27lbs, its lithium polymer battery lasts for up to 10 hours with 720p video playback. It’s available in Royal Blue, Silk White, and Vivid Pink. Connectivity options include 802.11a/b/g/n, and it also features GPS and GLONASS navigation. Asus Miracast wirelessly connects the tablet to a WiFi enabled TV or projector to share content. It’s available with 16GB or 32GB storage, has an microSD card slot, and comes with 5GB of free lifetime cloud storage.

Related Articles
Asus Transformer Trio a notebook, tablet and desktop in one

CDN Staffhttps://channeldailynews.com
For over 25 years, CDN has been the voice of the IT channel community in Canada. Today through our digital magazine, e-mail newsletter, video reports, events and social media platforms, we provide channel partners with the information they need to grow their business.
Previous articleBelkin launches covers for Samsung Galaxy Tabs
Next articleServer-on-the-go