Headlining the push for omni-channel solutions are Toshiba and Microsoft, who are partnering to “transform retail.”  Namely, Toshiba Global Commerce Solutions will be offering software and implementation services through the Microsoft Dynamics platform in what will be called “TCxGravity powered by Microsoft Dynamics.”

TCxGravity is a customer-centric point of commerce platform that aims to allow for consumers to buy from anywhere, and the new combined effort is being made available to small, medium-sized and large retailers alike.

“Under the new agreement, Toshiba Global Commerce Solutions will leverage its global leadership in store systems software, hardware, and services to extend and deploy Microsoft Dynamics industry-leading omni-channel technology platform for retailers,” Toshiba said in an official statement.  “This further expansion of Toshiba’s strategy for TCxGravity ensures a path forward for both existing and new customers, including grocery, specialty, hypermarket and mass merchants, to leverage the Microsoft Dynamics platforms, with the assurance of industry-leading technology, migration options and investment protection.”

On the hardware front, Panasonic announced point of sale solutions that may turn more than a few heads if widely adopted.  Aside from its latest iteration of the all-in-One POS workstation, the Stingray III, the company also announced the Toughpad FZ-R1, a 7″ all-in-one mobile POS tablet running Windows 8.1.

While on the surface, it looks like a Windows 8 tablet with a PIN pad, the company says it is so much more.  The device also comes with an integrated EMV reader, encrypted magnetic stripe reader, NFC compatibility, allowing secure yet mobile transactions.  Imagine customer service reps being able to perform cashier duties while on the sales floor, no longer tethered to a cash register.

In addition, the tablet functionality would open up countless possibilities such as customer engagement applications, stock management, and the ability to pull up a customer’s purchase history and preferences.

According to Panasonic, features on the semi-rugged device that are not available on consumer-grade tablets include a fast-charging replaceable battery, a ten-point capacitive multi-touch screen, an optional POS cradle, and a wide range of configuration options.  A base model starts at $1,799.

While the announcement was not made as part of the NRF conference, POS solution provider Givex unveiled its own offering, the Vexilor POS tablet that offers cloud and application-based sales functionality.  Based on a stripped-down Android operating system, Vexilor comes in 7″ and 10″ formats, with the former capable of reading gift and loyalty cards whereas the latter is designed to connect to a Verifone terminal to process transactions. 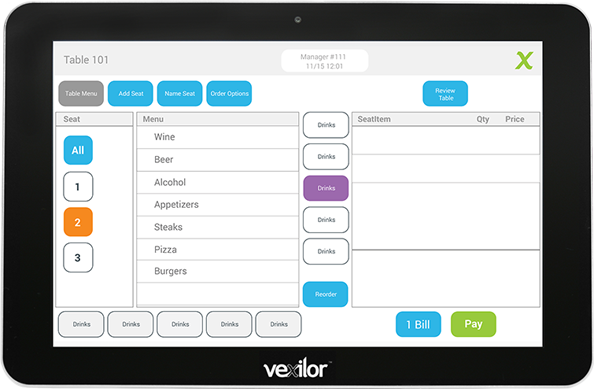 Both use the cloud to provide inventory tracking, online ordering, and other functionality to customers.

As a solution provider, Givex also offers seven different basic configurations for different industries, including retail and hospitality, and allows clients to customize features given their needs.

“We’ve seen omni-channel as a trend in retail,” said said Bryan Wang, Director Marketing at Givex.  “The biggest factor is having that cloud-based approach. You want to make sure that your customer’s experience is seamless across all channels.  We factor this in our future plans of Vexilor.”