Canadian phone maker BlackBerry is taking another stab at the touch-only smartphone form factor with its announcement today of the Leap, a 5-inch keyboardless device running BlackBerry 10.3.1.

However, rather than market it to executives and senior employees, it’s going for what may be an untapped market for the company: millennials.

In a press release called “BlackBerry Introduces BlackBerry Leap for Young Mobile Professionals”, the company said that the device is “an affordable all-touch smartphone in a modern and powerful design that is built for career builders.” 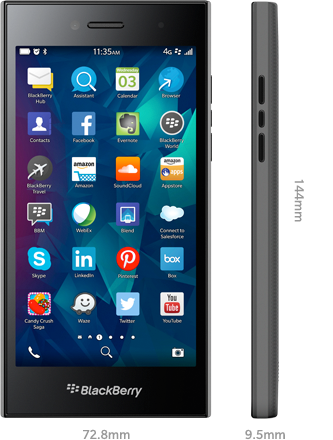 As with the Z10 and Z30, the company seeks to integrate under-the-hood security features with a form factor more akin to devices made by the likes of Apple and Samsung, but seems to be making a more concerted effort to market it to a younger market.

The smartphone features 4G LTE support, a 5-inch 720 x 1280 pixel display, 16GB of internal storage,  a 1.5GHz dual-core Qualcomm processor, BlackBerry’s own virtual keyboard, an 8MP rear-facing camera and 25 hours of battery life (on a 2800 mAh cell) which BlackBerry claims is based on a “heavy usage scenario on a power user profile.”

Reports are emerging that the device will cost $275 unlocked when it’s released in April.