After 16 years of unprecedented success in the solution provider channel, Dave MacDonald retired from the Canadian IT industry as the President and CEO of Softchoice, one of CDN’s Top 100 Solution Providers. 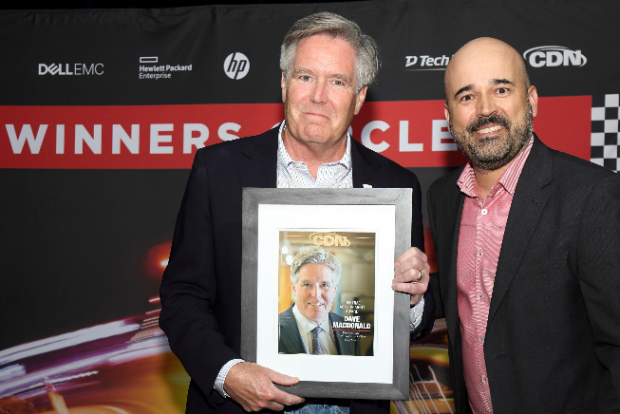 During his tenure, Softchoice won an unprecedented seven consecutive CDN No. 1 Solution Provider of the Year awards. No other Canadian solution provider has come close to that record.

MacDonald was instrumental in guiding the Toronto-based solution provider in its transformation from software direct marketer to one of North America’s largest IT solutions and managed services providers. He remade Softchoice by reinventing the company with a two-prong approach in North America, reselling with force in both software and hardware. He also took the company private.

MacDonald is responsible for two historic channel deals: the acquisition of NexInnovations, which was the Top Solution Provider at the time, and the 2011 deal to acquire Top 25 solution provider Unis Lumin.

“Building Softchoice on both sides of the border is a true Canadian business success story, and doing so within our highly turbulent, ever changing technology industry makes his accomplishments even more impressive.

There was a period early on in Dave’s tenure as a channel leader where the viability of channel organizations was being questioned. As industry economics changed, only those organizations with the strategic foresight and ability to dynamically execute thrived. Dave and his team set the benchmark for adding value in this country, which challenged and lifted the entire ecosystem.”

CDN Staffhttps://channeldailynews.com
For over 25 years, CDN has been the voice of the IT channel community in Canada. Today through our digital magazine, e-mail newsletter, video reports, events and social media platforms, we provide channel partners with the information they need to grow their business.
Previous articleTop tweets from CDN Top 100 gala
Next articleMNP LLP shining bright as a rising star in the channel

It’s bad enough to be victimized by one threat...

The RCMP keeps adding new information about its court-approved...