Canada’s Minister of Innovation, Science and Economic Development (ISED), Navdeep Bains, has been one of the most notable Canadian politicians this year thanks to the federal Innovation Supercluster Initiative announced in the 2017 budget. A supercluster is a dense area of business activity, according to ISED, that encourages both large and small companies to collaborate and develop ideas that can be brought to market with post-secondary schools and non-profit organizations. The government earmarked $950 million for five industry-led consortiums, which will be administered through ISED. 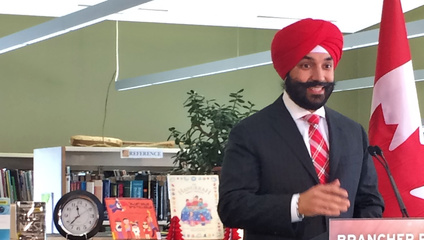 By the end of 2017, Minister Bains selected nine groups for the shortlist, and the final five will be announced sometime in early 2018. While there was only one specific digital technology supercluster – which is based in BC and led by Telus and Microsoft, among others – all nine featured several tech members. The Waterloo-Toronto corridor-based Advanced Manufacturing supercluster, for example, includes software startup Miovision Technologies Inc. and tech firm Myant Inc.; and the Quebec-based Mobility Systems and Technologies supercluster is led by simulation technology manufacturer CAE Inc.

Minister Bains told CDN in October that he was thrilled with the level of coordination between companies and organizations for the supercluster initiative, and was looking forward to seeing how they will grow the economy and position Canada as an innovation leader on a global stage.

Beyond the supercluster program, Minister Bains was instrumental in expanding high speed broadband internet services across Canada in 2017 – particularly to rural and remote regions. He also laid out a clear plan to make the country a leader in big data and analytics, announced a $1.2 billion CAD Strategic Innovation Fund for high tech research, development, and commercialization, and invested in several key research centres, including the Blockchain Research Institute and the Vector Institute for Artificial Intelligence.