Kevin Peesker began 2017 as the head of Dell EMC Canada, but stepped down from the position in the summer. His downtime didn’t last long, however; by September, he was the first Canadian-born president of Microsoft Canada since Frank Clegg, who retired from the company at the end of 2004. 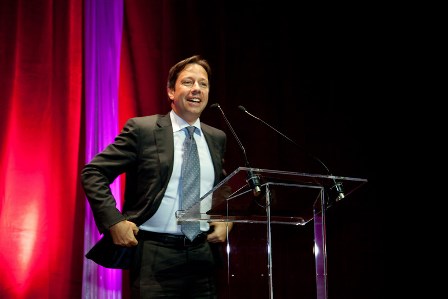 Peesker had nothing but good things to say about his time at Dell EMC while speaking with CDN, and despite having just a few months at Microsoft under his belt, the executive appears to have made quick work of familiarizing himself with what his new company accomplished this year and figuring out how to make sure its success will continue into the new year.

“2017 as a calendar year was an incredibly busy one for Microsoft Canada and I’ve been in this technology industry for 28 years now. I can’t think of a year that was more exciting and transformational than 2017,” Peesker told CDN. “I was super fortunate to join shortly after Microsoft Canada was awarded the subsidiary of the year as a Microsoft global platform, which is phenomenal news.”

Peesker brought his experience in the Canadian channel with him to Microsoft, which he noted had always been a leader in the partner space.

“[Microsoft] is very highly ranked by the partner community, which is awesome. My focus is absolutely on growing this even further. As I look at our 14,000 partners across Canada, whether they’re national or regional partners, they’re incredibly well-serviced by our distribution network and we have specific programs for each one of their expertise areas, so I want to make sure that continues,” he explained.

Peesker added that he is looking forward to developing Microsoft’s work in emerging areas like artificial intelligence and machine learning, blockchain, and quantum computing, and integrating those into its partner strategy.

On a personal level, Peesker was able to bring 120 CEOs on the Business Council of Canada down to Silicon Valley to meet with Microsoft CEO Satya Nadella and LinkedIn CEO Jeff Weiner for a dialogue on how to use technology to interact with customers. He also had the opportunity to meet the new U.S. ambassador to Canada, Kelly Knight Craft, and drive conversations around digital transformation in relation to the economy and trade agreements like NAFTA.

Peesker also highlighted the fact that 2017 saw Microsoft Canada undergo one of the largest reorganizations of its go-to-market activities in over a decade. Part of that reorganization was critically focused around aligning its resources under an all-encompassing channel program called “One Commercial Partner”. This was a key investment for Microsoft Canada in terms of aligning, modernizing, and simplifying how it worked with its Canadian partner customers, Peesker said.

This move represented a larger trend for Microsoft Canada this year in its renewed focus on collaboration. Adobe chose to use the Microsoft cloud platform, Azure, and partner with Microsoft for a go-to-market program in 2017. SAP also teamed up with Microsoft to use Azure for its provision of services to its customers, while several smaller Canadian tech companies such as Toronto-based artificial intelligence company Rubikloud Technologies Inc. also found a home in Microsoft Azure.

Thanks to Peesker’s leadership, the company was also awarded a contract in late December to modernize the Canadian government’s infrastruc-ture and move it onto the Azure platform.

Microsoft was also a founding member of the Digital Technologies consortium that made the shortlist for the federal Innovation Supercluster Initiative that was announced in the 2017 budget.

When it comes to 2018, Peesker said he is looking forward to driving digital transformation in Canada through further cloud adoption, collaboration with local companies, and implementing new technologies like AI.

“I believe Canada has been a bit of a laggard on a global level in terms of undertaking cloud platforms for infrastructure, so I think there’s going to be a tsunami of movement to the cloud in 2018. We’re seeing that within organizations on the private sector side, and now we’re seeing it on the public sector side as well,” he explained. “Another key piece going forward is applying that next level tech to Canadian companies and organizations, which will be characterized by artificial intelligence or cognitive services that reside on our Azure platform. You’re seeing this across certain sectors of the marketplace like the financial industry already, and we’ll see it become much more pervasive in the overall economy too.”