If year one of HPE Canada was categorized as learning to become more agile and easier to do business with, then year two was about building on top of those goals, whether that be via numerous major acquisitions, or a complete reorganization that saw longtime HPE vet Charlie Atkinson step down as the head of HPE Canada.

With this restructuring, HPE was able to reduce the number of layers of management from eight down to four, allowing for faster turnaround times for channel partners. After five years with HPE Canada, Zack Dickson was named the organization’s new channel chief.

“Charlie was a passionate leader and a true advocate for HPE and a big part of what we built here in HPE Canada. His departure was part of a whole overall reorganization from country models into geographical selling regions,” Dickson told CDN. “With that model shift, we are still empowered here in Canada under John [Dathan, vice-president of strategy and business development, Enterprise Group at HPE Canada] to make our own decisions. We’ve seen a fantastic swell in support from the bigger, broader organization, whether it be operationally or best practice sharing.”

In the past, HPE was not the easiest to deal with for channel partners. Part of becoming more agile is changing that mentality.

But the reorganization in October should not undercut the numerous moves HPE made as a company throughout the year. Before his departure, Atkinson oversaw the Canadian operation roll out new storage, server, and hyper-converged offerings. HPE also looked toward digital transformation with partner program changes over the summer that made selling its hybrid and edge solutions easier for partners. 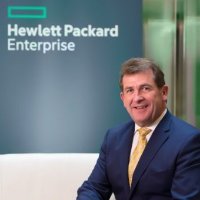 The first three quarters of 2017 were also defined by multiple acquisitions, including that of all-flash and hybrid-flash storage solution provider Nimble Storage and hyper-converged infrastructure solution provider SimpliVity. HPE also acquired Niara, an emerging talent in the User and Entity Behavior Analytics (UEBA) security market segment, Cloud Cruiser, a San Jose-based company that brings to the table an IT infrastructure consumption analytics application, and born-in-the-cloud services company Cloud Technology Partners (CTP) that will strengthen its hybrid IT services.

“I can’t overstate how critical those acquisitions were. We now have the best portfolio that we’ve had in decades,” said Dickson.

The Nimble Storage acquisition will be particularly helpful, considering HPE’s success with its 3PAR products. Dickson explains how this hits a sweet spot in the Canadian market.

“It’s filing a need for us down market, and it is something our customers are asking for. We’ve had wild success with 3PAR and this allows us to start with the 3PAR conversation, and if needed move it to a mid-range product in the Nimble space,” he said.

And considering that Nimble Storage had been 100 per cent channel for many years, the acquisition should music to channel partners’ ears. Dickson wants to take that mentality and see where it can be applied in other areas.

Throughout his time at HPE, Dickson spent time working in hybrid IT strategy, which will certainly come in hand when working with channel partners about the PointNext offering, the company’s rebranded services organization that includes consulting, and is part of HPE’s big bet on hybrid IT

“We need to make a strong pivot into being consciously effective and predictable, and co-selling with our channel on every account possible. Customers are relying more and more on the channel to provide them thought leadership, input, or a vision for the future than they ever had before,” he explained.

This may come in various different ways ranging from simplifying the company’s product portfolio to adopting practices piloted in the U.S. Most importantly, Dickson wants to be more predictable.

Alex Radu
is a staff writer for Computer Dealer News. When not writing about the tech industry, you can find him reading, watching TV/movies, or watching the Lakers rebuild with one eye open.
Previous articleBell strengthens its connect-first cloud strategy with AWS partnership
Next articlePivot3 announces new HCI solution, targets small businesses and branch offices