Picture technicians at the Toronto-facility of Celestica Inc. are working on the prototype of an adhesive bandage that will eventually contain sensors that report on a user’s heart rate, temperature and even sweat rate among other vital signs.

The high-tech band aid is just one of the many projects that people at the Canadian electronics manufacturing firm envision for its recently opened microelectronics laboratory.

The lab, a unique 1,100-square foot ISO (International Organization for Standard) class 6 room that is controlled environment for temperature, humidity and airborne particles, is part of Celestica’s bid to transform itself, according to Irene Sterian, the company’s director of technology and innovation development.

“Celestica in continually re-inventing itself,” she said in an interview with CDN. “About 50 per cent of what’s going on now in our facility we did not have three years ago.”

The company is now doing a lot of work for the aerospace, defense and healthcare sector, said Sterian.

Celestica was one of Canada’s high tech darlings in the early 1990s but like many IT businesses was nearly wiped out in the dot-com bust of 2001.

A spin-off of IBM, it was one of Big Blue’s most profitable divisions in the early 1990s. Headed by University of Toronto electrical engineering graduate Eugene Polistuk, Celetica operated as a wholly owned subsidiary of IBM Canada and cranked out circuit boards, memory products and power supplies for other companies. Celestica was later acquired by Onex Corp. in 1998 and by the end of following year was considered the world’s third largest electronics manufacturing services firm with a turnover of about $5.3 billion.

Celestica lost many contracts in the wake of the dot-com crash and the company had to lay off 3,000 people. It would take a series of compensation rollbacks, and the sale of several divisions, until operations stabilized once more through 2008. 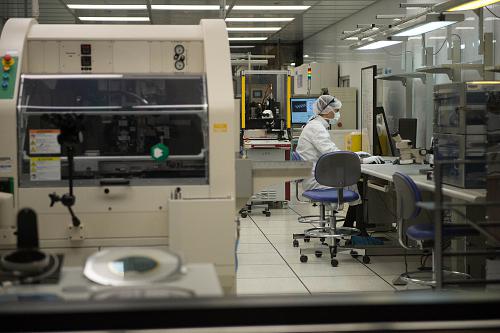 Since then, Celestica has branched out into other areas such producing smart phone components for Blackberry (until the Waterloo, Ont. company switched to Asian suppliers in 2012) and building solar panels (which Sterian said remains a very profitable operation).

Celetica’s latest venture, the microelectronics lab, is aimed at start-ups, small and medium size businesses and large original equipment manufacturers (OEMs) that are looking for a way to manufacture miniaturized electronic products and equipment. Think of the Internet of Things, machine-to-machine communications and the sensors and other components that come with them. Some analysts say the IoT market could be worth more than $19 trillion.

“Microelectronics is in demand for high-reliability markets such as healthcare, aerospace, defense, communications and renewable energy. As optics and photonics technologies permeate these high-reliability sectors, it is becoming increasingly more important to miniaturize and cost reduce,” said Shawn Blakney, senior director, technology and innovation, Celestica. “Smaller electronics provide the flexibility for lighter, portable and potentially more affordable devices, a trend that is already proven in the consumer market.”

Sterian said customers can use the lab, equipment and Celestica’s technicians to build prototypes and to quickly bring products to market. Proximity and access to Celestica’s tech talent and equipment can also help businesses cut cost.

“Developing products right here on Canadian soil reduces a lot of the wasteful back and forth communication that many companies experience when they outsource work overseas,” she said. “In our microelectronics laboratory, customers can actually come to track work being done on their projects.”

A conversation with IBM Canada president Dave McCann: It’s all about the...