A senior channel sales executive at a recent Canadian Channel Chiefs Council (C4) meeting in Toronto joked she was recently “gifted” with seven new employees, none of whom have ever worked in the channel.

The joke is met with laughter, but as the lighthearted moment passes, the story suddenly reminds everyone at the meeting that the age-old misconception that channel management is a sideline career, is alive and well. So much so, in fact, that an onboarding process for sales people entering channel management for the first time is still neglected, or worse, flat-out ignored by upper management. Everyone at the meeting seems to agree: a set of standards that clearly define the role of a channel leader is sorely needed, and the C4 could help.

“If you want to ‘gift’ me with someone, gift me with someone who can do these things,” the executive said, waving an imaginary sheet of paper with the standardized framework.

According to John Rudow, president of The Rudow Group Inc., a California-based organization that helps businesses improve their direct and indirect sales performance, work is being done to produce such a framework.

Rudow presented C4 members with three separate frameworks for the roles of channel manager, manager of channel managers, and channel chief. The latter – still in draft form, according to Rudow – was constructed with the help of Corrine Sharp, C4 president, and clearly emphasizes responsibilities around planning partner programs and incentives, and marketing and sales management. Channel managers’ responsibilities lean more into managing partner portfolios, and establishing why partnerships are formed in the first place.

Prior to starting The Rudow Group, Rudow recalled a time years ago when he was tasked with delivering sales training to channel managers at Microsoft.

“It never felt right,” he explained. “When I left that organization and founded my own company we went back to Microsoft and started from scratch…and built these frameworks.”

But developing a framework is one thing – getting people to buy into it, is another. 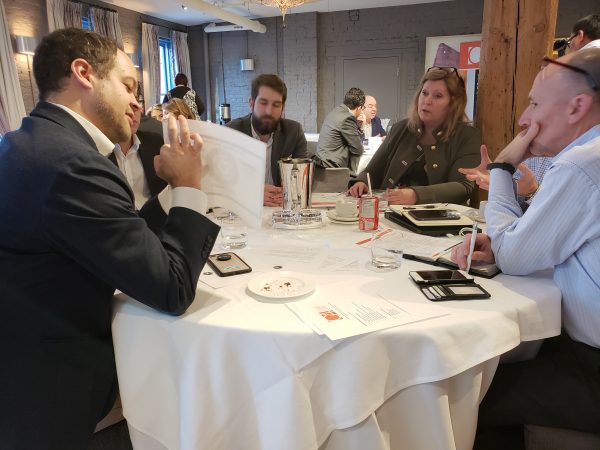 “When we talk about education and enablement, what are we actually referring to?” Rudow asked everyone. “There’s a difference between transferring knowledge and training someone on a tool, and behavioural skills training. So when we look at how to take a sales guy and make him an effective channel manager, that needs a different approach compared to the transfer of knowledge about a product.”

Rudow indicated that a combination of collaboration tools such as Webex, small consumable training sessions and the distribution of badges and certifications for the successful completion of certain skills training, are the key ingredients for successfully changing behaviour.

“There’s a huge movement towards ongoing design and development,” explained Rudow, adding people are abandoning the traditional “drive-by training” sessions due to their lack of enforcement around knowledge retention.

After the meeting, Jim Barnet, director of sales and marketing for Fivel, said he’s glad to see C4 working to define the role of channel chiefs and managers.

“For years, channel management was attached to a vague responsibility that was basically ‘help channel partner be successful.’ It was no where near as defined as an HR role, or a sales role, for example,” he said. “A lot of people just fell into their channel roles, but the industry is finally realizing that this is a real job with real skill sets.”

Those skill sets are reflected in the C4’s eight competency pillars: Strategy, finance, marketing, channel building, operations, managing change, leadership and talent management. The pillars are part of the not-for-profit’s Pathway Program, which provides participants resources and workshops to ensure a candidate’s success in whichever pillar they choose to pursue.

“I think the C4 mandate not only helps people who are in that role build and develop their own career path with specific objectives and skill set mastery,it also tremendously helps identify the best people who are going to be the happiest and most productive in those roles,” said Barnet.