Today marks the first day the Microsoft Surface Pro 3 is available in Canada. And the channel will play a big part in the launch.

With the launch of the Surface Pro 3, Microsoft is banking on this product replacing the notebook and desktop.

James Nicolson, Surface product manager for Microsoft Canada, said that the Surface is making the distinction as a notebook replacement because approximately 95 per cent of iPad or tablet users also have a laptop. The distinction Microsoft is trying to make here is that with the Surface Pro 3, you won’t need a laptop.

The major changes to the Surface Pro 3 have been well documented. The Surface device was criticized for being too thick, too heavy and too small in terms of screen size for it to be a productivity tool for business.

In this new version of the Surface, Microsoft has answered those three areas with a 12-inch ClearType Full HD display. The display has 2160 by 1440 screen resolution — that’s about 50 per cent more pixels. “This is the most pixels we have ever put on the screen,” Nicolson said.

The screen has an optical bonding process that basically sucks the air out of the device and increases the sensitivity of the digital pen. Also, with the pen, a click refreshes the page on OneNote. The digital pen can also sit on the charging device because it’s magnetic. It can also be clipped onto the keyboard.

“The vision for the Surface is for it to be a productivity tool for business and to provide a great experience for Windows 8. This is your new laptop or desktop,” Nicolson said.

The kickstand was an innovative touch to the original Surface, but it became awkward for users who work with the product on their lap. Microsoft rebuilt the kickstand to go back 150 degrees. “It’s almost flat,” Nicolson added. The kickstand also has a Micro ISB.

The new Surface also gets a larger attachable keyboard with a magnetic stabilizer and ergonomic feel, and the keyboard can be raised. The feel of the trackpad was improved with digital silk and tactile response. It has approximately seven hours of battery life. 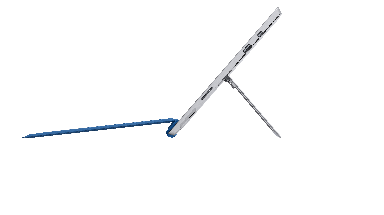 Nicolson said that the sound was an important feature to improve because business users will need it for Lync meetings and Skype calls.

The question for Microsoft with the Surface Pro 3 is can they convince the business community that this new product is ready for business.

Nicolson said that Microsoft Canada is working through trials and proof of concepts for larger enterprises and they have announced a big win with a 5,000 unit sale to CDI Colleges.

Microsoft Canada has also introduced a Trade-in Program for the Surface Pro 3. According to Nicolson, the program will work similar to how a car dealership trade-in program. Microsoft’s Surface Trade-in Program will target customers who are looking to get rid of their iPads or Android-based tablet devices. These devices will be assigned a value and that dollar amount will be put towards the purchase of a Surface Pro 3 or a Visa gift card.

Channel partners will, for now, only be asked to promote the program to their customers.

Pricing for the new Surface device will be based on processor speed. The Intel Core I3 chip will be $849 with keyboard, while the Core I5 version is around $1,100. Microsoft will make a Core I7 Surface Pro 3 available in August.

Another interesting change is that the Surface 2 branding replaced the RT name. Premium versions of the Surface will be the new Pro 3 and the Pro 2.

The Surface Pro 3 will have docking station that can bring multi-monitor support and an array of USB 3 and 2 ports. There are also new security enhancements such as on-screen digital keyboard for pin entry, the ability to disable the boot from the USB and card readers. There is availability for third party anti-virus software. The new Surface Pro 3 can also go into kiosk mode for those applications.

Not as protected as we think we are: This Week In Ransomware as of Monday, August 15, 2022

Are the things we think protect us from ransomware...