Charity teams up with the channel to bring computers to children 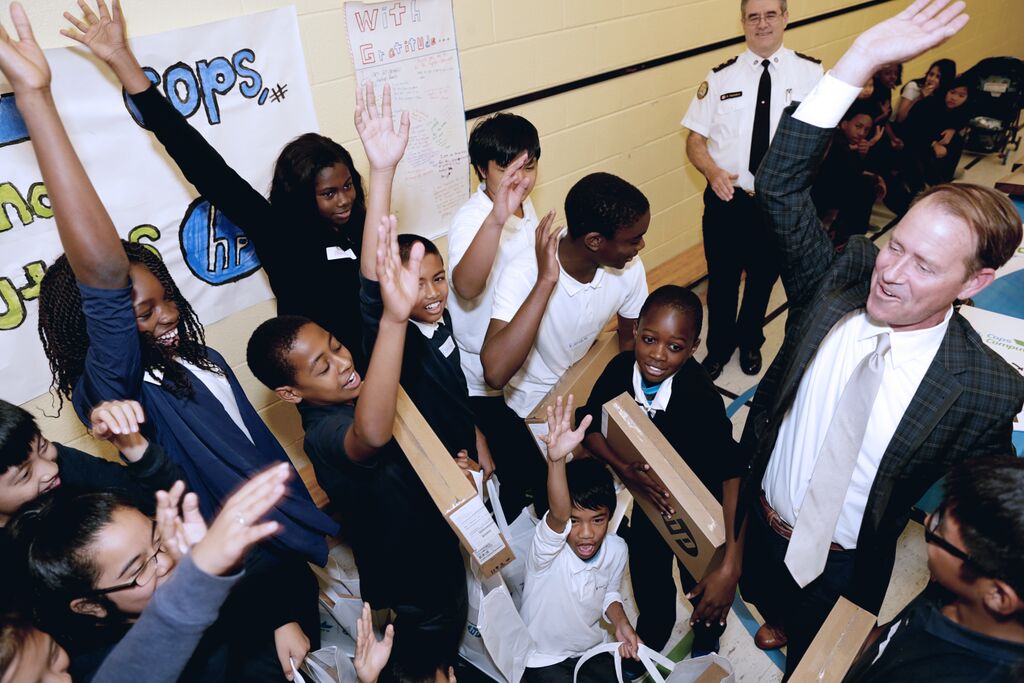 Daviella Zapata was confused when I first asked her about being an alumni.

The girl was probably not familiar with the word. After all, she was only in grade 8 at St. Rose of Lima Catholic School in Scarborough, ON.

But Zapata was in fact among the first wave of students to be selected for enrolment by their teachers last year in the Kids, Cops & Computers program – it’s one that brings laptops to kids in need in various schools across the Toronto District and Toronto Catholic District School Boards.

Now in her second year of the program, Zapata was watching about 20 of her younger school mates being called to the front of the gymnasium in front of friends, parents and teachers to receive a hefty bag.  In it, there were a USB key, software licenses, and a laptop, which in some cases, was a student’s first.

It’s difficult to imagine that in Canada in 2015, students in middle school and high school go without access to basic technology such as a laptop. However, the data shows otherwise.

According to People for Education’s 2014 survey of Ontario’s elementary and secondary schools about the availability of technology, while computer access in classrooms is nearly ubiquitous at 96 per cent, only 58 per cent of students have their own devices to use while away from school while one percent of students have no access at all.

For Zapata, the computer she had received last year was not her first, but it’s her first with office capabilities.

“I have a MacBook but it didn’t come with [writing software],” she said. “This one helps me with my school work when I need to type something, it helps me study because I can search for anything. I like it very much.”

The ones distributed through the program, such as the HP ProBook 11 EE G1 being given to new inductees this year come bundled with software, including Microsoft Office, antivirus, and in some cases, even internet access from Rogers for underprivileged families.

Yet, access to technology is only one aspect of the program. Merry Go Round, the organization behind the five-year program, also partners with the Toronto Police Service to provide training sessions to the students enrolled on various topics such as cyberbullying, social media, and online safety, all accompanied by assignments that students have to complete in order to stay enrolled – and keep their computer.

The Toronto Police also take time away from screens to do community building exercises, such as bringing the students to a station to show them a day in the life of an officer.

“A lot of times police respond to something and are already here,” said Amanda Frederick, community school liaison officer with the 43 division of the Toronto Police Service. “This way, we can be proactive. It’s about giving certain people that extra hand.”

Nineteen years into its operation, the program has reached almost 76 schools and 3,500 students in grades 7 to 12 across Toronto, 600 of whom are joining this year.

According to Kiersten Eyes, director of development at Merry Go Round, while her organization technically has to pay for the services and hardware, its exclusive partnership in recent years with HP has meant it receives the computers at cost.

In addition to Merry Go Round, HP and the Toronto Police Service, other parties involved include teachers from individual schools who choose students based on financial need and leadership potential, as well as MnB IT Services, which won the Bronze award for Best Service Organization at the CDN Channel Elite Awards last month for its work with the charity.  The solution provider handled acquisition, storage, inventory management, delivery and distribution of laptops to over 30 schools in the area.

“It’s not about working only,” said Mat George, president of MnB. “We give an opportunity to the kids, so at the end of the day we try to make a difference.”