Size matters when it comes to home entertainment. Mounting a large display on your wall is a surefire way to draw envy from your visitors. Ego boosting aside, large displays can also deliver better cinematic experiences to a larger crowd.

Today’s home entertainment systems are constrained only by the size of your wallet: whatever your wants and needs may be, you can get it provided you have enough funds. For the ultra-elites looking to bestow their mansions with the most impressive display possible, Samsung’s Wall is an enticing option.

Out of the plethora of display technologies available, two reign supreme in prevalence: thin-film transistor (TFT) LCD displays that layer a panel of liquid crystals over an LED backlight, and OLED displays that generate both colour and light on the same pixel. Over the years, the market has seen a few unique variations such as Samsung’s Quantum Dot displays.

But The Wall doesn’t use any of those. Instead, it uses something called microLED, the biggest disruptor in display technology since OLED. As its name implies, the LED lights are absolutely tiny; many times smaller than the ones in today’s TVs. Each microLED generate their own light just like OLED. It’s sometimes known as direct LEDs since the viewer looks directly at the LEDs themselves. 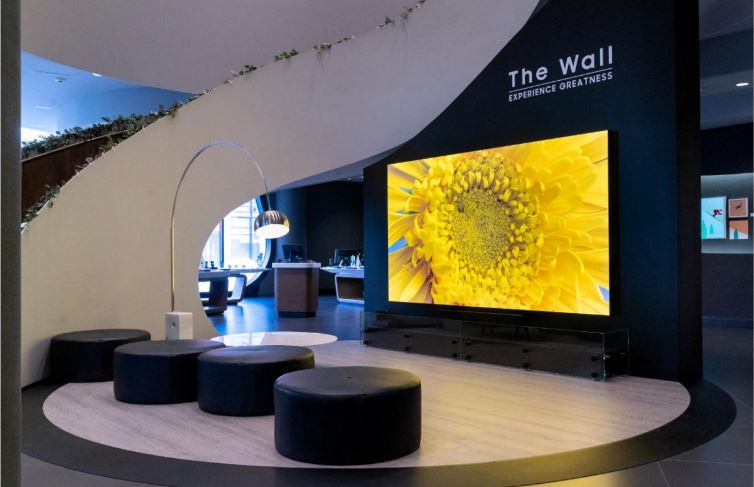 The Wall at the Toronto Eaton Centre Samsung Experience Store

Samsung isn’t the only one venturing into the microLED game. LG, Sony, TCL, and a few others are also actively displaying its own microLED displays.

In September 2019, Sony started to sell its microLED-based TVs to consumers. Its highest-end 790-inch 16K resolution model costs US$5.76 million.

Although microLEDs and OLEDs functionally overlap, microLED doesn’t use organic materials that constitute the building blocks of OLEDs. Their construction grants microLEDs high resilience against burn-ins, excellent brightness, and prolonged lifespan; all of which are shortcomings of today’s OLED displays, especially on the budget end.

As an added bonus, microLEDs are structurally simpler than OLEDs, which should make them easier to produce, right? Not so fast. Shrinking pixels is one thing, but striking the balance between efficiency and pixel density is another. In addition, pixel pitch – the gap between two individual pixels – needs to be small enough to be indiscernible to viewers. Samsung managed to close that that gap to just 0.8mm, creating a virtually seamless experience. 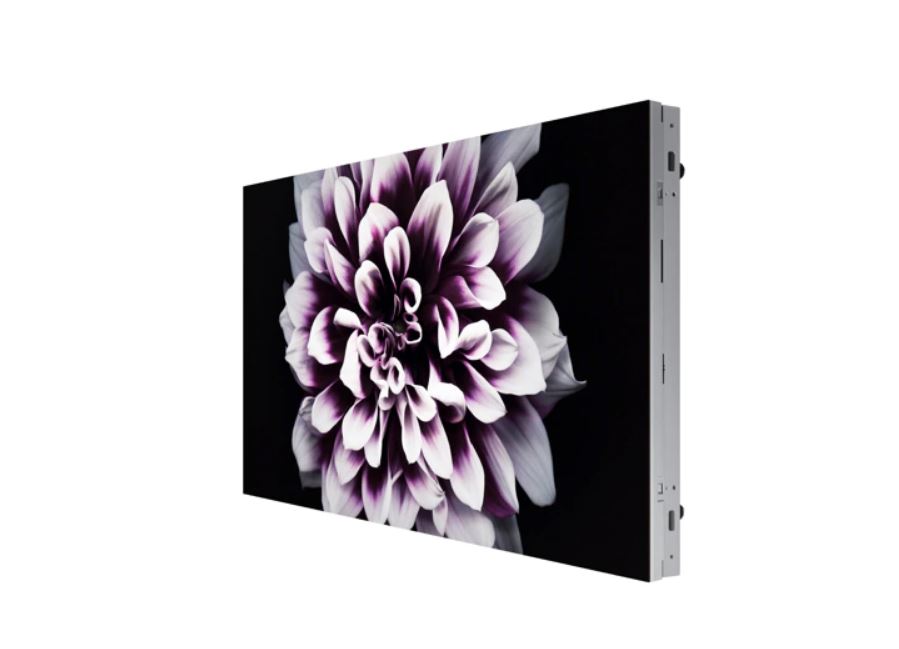 Thanks to the nearly imperceptible pixel pitch, The Wall appears as one massive panel. But look closer, and you can spot its smaller individual cabinets. Each cabinet is 80.6 cm by 45.4cm and weighs 12.5kg. Sporting a 960 x 540 resolution, the cabinet has a 500nit max brightness (1,600 nits peak brightness with HDR enabled), up to 60Hz refresh rate, certified for HDR10+, and is rated to last 100,000 hours. Colors are calibrated at the factory and again upon installation.

Through selling them as smaller modules, the Wall can technically scale to any size and be assembled in different shapes. As such, it’s suitable for commercial applications, especially as digital signage. It can also find homes in large offices, boardrooms, and event spaces. Samsung said that the Wall has already been deployed in the American Express office in New York, Annenberg Photography museum in Los Angeles, and luxury homes across North America.

Protected with a durable glass front, the Wall can ward off occasional scrapes and light bumps. In case of severe damage, the cabinets can be individually replaced.

The Samsung Wall is available in Pro and Lux series. The Pro is tailored for commercial and the Lux for luxury homes. Pro buyers would be able to work with Samsung to build their desired size and shape. Lux buyers would only have the option to select from pre-constructed sizes–though they’d only be half as thick as the Pro series.

Samsung’s direct-view LEDs show ample promise, but its extreme pricing may put it out of the reach of many. Currently, each cabinet costs US$16,800. You’ll need to snap 15 of them together to form a 4K display, which would cost $251,685. Samsung does also offers cheaper variants with wider pixel pitches. Obviously, they don’t offer the same seamless display quality.

Fortunately, you won’t need to buy it to try it. The Samsung Wall is currently being showcased at the Toronto Eaton Centre Samsung Experience store, where it’s placed directly in front of the main entrance to catch the eyes of passing shoppers.