The recent tech news that we maybe didn’t get to yet, or it’s the news we’ve reported on and feel is worth resurfacing.

Apple, Microsoft and Google are the most trusted of all “big tech” companies among Canadians when it comes to biometric data – survey

According to a recent survey of more than 1,000 Canadians from Gartner’s GetApp, 26 per cent of respondents say they “highly trust” Apple to properly use and safeguard biometric data. This level of trust is greater than that placed in government agencies, which only 21 per cent of respondents said they trust highly.Overall, 65 per cent say private companies’ use of biometric data should be regulated by law, while one-third of people surveyed don’t trust tech companies at all with their biometric data. [Full survey results here] 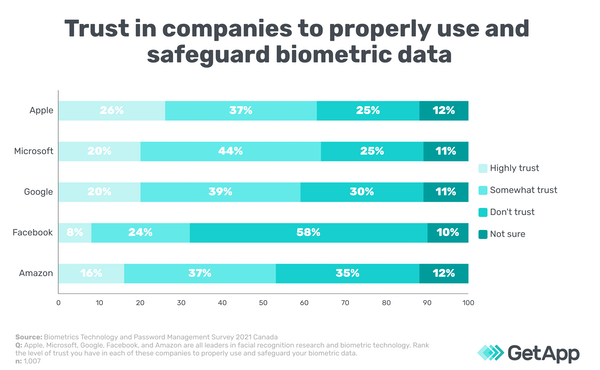 Last week, The University of Ottawa announced it has partnered with Quebec-based IT company, FX Innovation, and Canada’s Centre of Excellence in Next Generation Networks (CENGN), to launch CloudCampus, a cloud expert training program designed to develop and requalify the tech workforce in Canada and solidify Canada’s economic recovery and success. According to Peter Heath, senior manager of training programs at CENGN, who broke down the announcement on May 27, the program that has been developed for the first cohort includes three modules. The first one is a personalized introduction to cloud to make sure that all of the participants have the basics. The second module is Docker and Kubernetes, which are the two key tools in the containerization ecosystem. Lastly, the third module is infrastructure as code (IaC) which will dive into a number of tools that sit behind virtualized infrastructure on the cloud.

The Computing Technology Industry Association (CompTIA), a nonprofit association for the IT industry and workforce, has selected 15 cybersecurity experts to serve on the inaugural MSP Champions Council of CompTIA Information Sharing and Analysis Organization (ISAO).

CompTIA ISAO is a threat intelligence and actionable analysis tool specifically tailored to meet the needs of technology vendors, MSPs, solution providers, integrators, distributors, business technology consultants, and their customers. Selected from leading organizations across the information technology (IT) industry and its community of managed services providers (MSPs), the organization said these members will provide their expertise and ideas to guide the CompTIA ISAO. [Details of all the members can be found here]

Last week, global investment firm KKR announced an investment of over CA$66 million in Canada-based eSSENTIAL Accessibility (eA), the provider of Accessibility-as-a-Service platform that ensures organizations’ digital properties are accessible for people with disabilities. As deadlines loom for organizations to confirm their digital properties are compliant with global, national, and provincial regulations, such as the Accessibility for Ontarians with Disabilities Act (AODA), eA says its platform addresses the urgent demand for a comprehensive, sustainable solution. Businesses with at least one Ontario employee, and 50+ employees total, have until June 30, 2021, to ensure their online presence meets AODA standards. [More on AODA and the deadline here]

The CRTC scrapped cheaper internet costs, so what should Canadians know? [Full story]

The Canadian Radio-television and Telecommunications Commission (CRTC) recently struck down its wholesale pricing set in 2019 that would have reduced the cost of borrowing networks for smaller ISPs, which set off waves of exasperation among independent internet service providers (ISPs) and worries of bias in the CRTC’s leadership.

At the conference, Microsoft made more than 100 announcements, including new features and functions aimed at providing that help to developers.

The chief executive officer and founder of cloud service provider ThinkOn, together with other IT channel partners, has launched a digital marketplace for the federal government. More than a year in the making, GCloud.ca by ThinkOn launched May 26 and is already waiting to enlist dozens of software vendors that have expressed interest in the portal.

The British Columbia government recently announced that the B.C. Provincial Nominee Program (PNP) Tech Pilot, originally set to expire at the end of June 2021, has been made permanent and renamed to B.C. PNP Tech.

A majority of Canadians surveyed want governments to get tougher on harmful content on social media platforms and increase the powers of the federal Privacy Commissioner to help safeguard personal information.

All the Teams updates announced at Microsoft Build 2021 [Full story]

D&H came out of 2020 ‘virtually unscathed’ and is ‘bullish’ about the future, exec says [Full story]

“We’re going after the professional services side of the business,” Tom Guagliardi, the company’s vice-president of sales and vendor management for the Canadian business, D&H, told Channel Daily News, adding that includes cloud, integration and managed services. “We’re in a growth mode.”