Comparing BlackBerry Z10 and Apple’s iPhone: which is sexier? 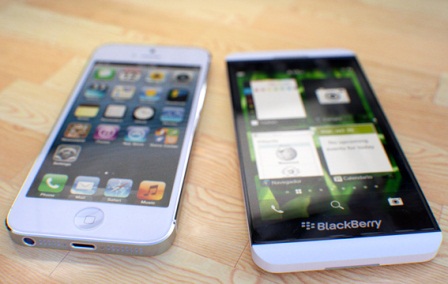 The buzz is growing around Wednesday’s launch of the BlackBerry Z10, Research in Motion‘s next-generation smartphone featuring its new BlackBerry 10 OS, and representing a perhaps final opportunity to turn the fortunes of the struggling Waterloo, Ont.-based smartphone giant around.

The online buzz has been growing for weeks, and it got a big boost Monday from influential U.S. gadget blog Gizmodo, which declared the device hotter than Apple’s iPhone, the device that has figured in much of RIM’s recent misfortune.

Gizmodo also has comparative photos of the iPhone and the BlackBerry Z10, and side by side it does look like a very attractive alternative.

If RIM is to begin a turnaround with the Z10, online buzz will be important. And it looks like they’re off to a strong start. More pictures here.

Jeff Jedras
A veteran technology and business journalist, Jeff Jedras began his career in technology journalism in the late 1990s, covering the booming (and later busting) Ottawa technology sector for Silicon Valley North and the Ottawa Business Journal, as well as everything from municipal politics to real estate. He later covered the technology scene in Vancouver before joining IT World Canada in Toronto in 2005, covering enterprise IT for ComputerWorld Canada. He would go on to cover the channel as an assistant editor with CDN. His writing has appeared in the Vancouver Sun, the Ottawa Citizen and a wide range of industry trade publications.
Previous article
Toshiba preps for Super Bowl Sunday
Next article
Microsoft “considering” bringing Surface Pro to reseller channel