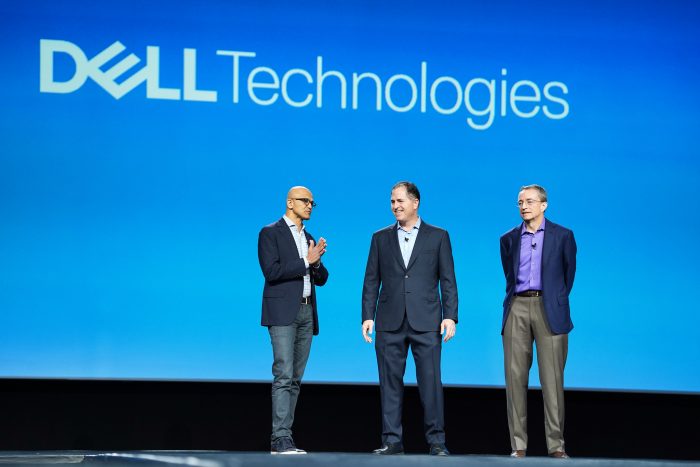 LAS VEGAS — Knowing it couldn’t dominate the public cloud space the way Microsoft and AWS have, Dell Technologies has decided to take a different approach with its cloud strategy, and according to analysts, it’s going to make the next several years mighty interesting.

It is scheduled for limited availability in the second half of 2019 after a brief beta testing period that began this week.

“Dell, from a strategy standpoint, has absolutely done the right thing by making VMware the linchpin of their strategy to connect and manage workloads multiple clouds,” said David Vellante, chief analyst and co-founder of research firm Wikibon and co-host of theCUBE. “If you don’t have the public cloud, then you can make money with software to connect clouds. Without VMware, this is a lot less interesting.”

Microsoft CEO Satya Nadella made a surprise appearance to drop yet another announcement that VMware and Dell EMC are partnering with Microsoft to allow Microsoft’s customers on Azure to manage their workloads with VMware’s virtualization software. VMware’s Workspace One application-management platform is now part of the Microsoft 365 ecosystem, meaning its users can manage features in Office 365 across devices through the integration of Microsoft Intune and Azure Active Directory Premium.

The move is in response to the growing number of companies using multiple cloud services as well as internal data centres, Clarke told the audience Monday.

“It’s an entirely new asset management process that companies are having to deal with,” explained Richard Villars, vice-president of data centre and cloud for IDC. “A lot of work still has to be done on that front, and that’s relevant to partners because it opens up an opportunity for them.”

Vellante described the appearance by Nadella and the subsequent announcement a surprise, but said Nadella’s physical presence underscores Microsoft’s commitment, a feat that wouldn’t have seemed possible two years ago.

Microsoft’s announcement in 2016 that it was making a preview available of VMware virtualization on Azure didn’t sit well with VMware. In a blog post shortly after, VMware emphasized how the preview was developed without VMware’s participation and that compliance and an appropriate support model was needed.

“I’m sure Michael Dell is the guy that made that deal happen,” said Vellante.

Villars said the potential implications for partners could be interesting if Microsoft decides to funnel some of that VMware provisioning into an as-a-service model, something Nadella appeared to hint at on stage.

“That is a much more powerful message for Microsoft,” Villars told CDN.

Dell’s current competitors are now IBM and Red Hat, according to Vellante.

“Red Hat is coming at this with IBM, from the standpoint of a Platform-as-a-Service and an application development platform with Openshift,” he said. “Dell executed great on the announcement. We’ll see how they execute in the field.”