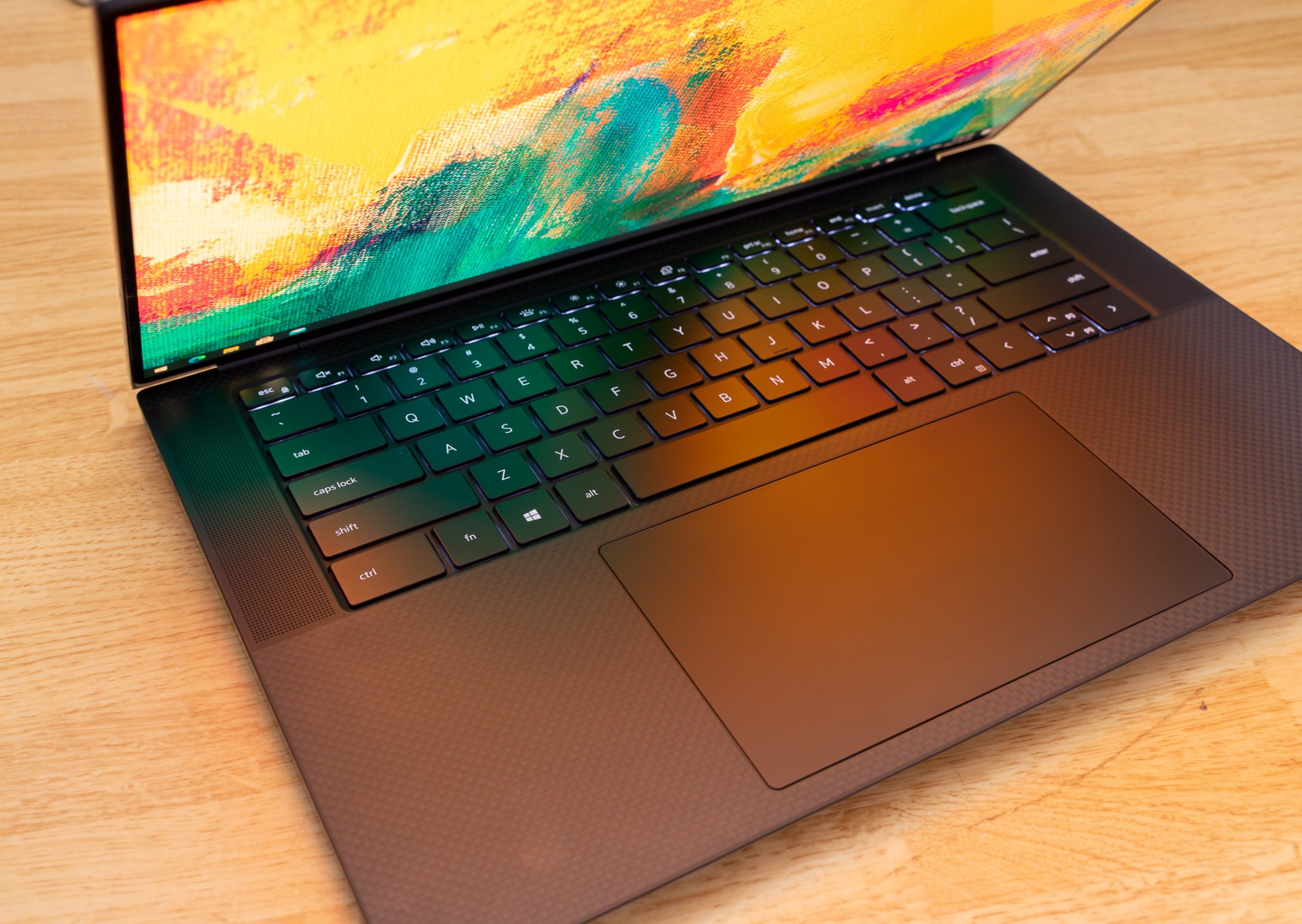 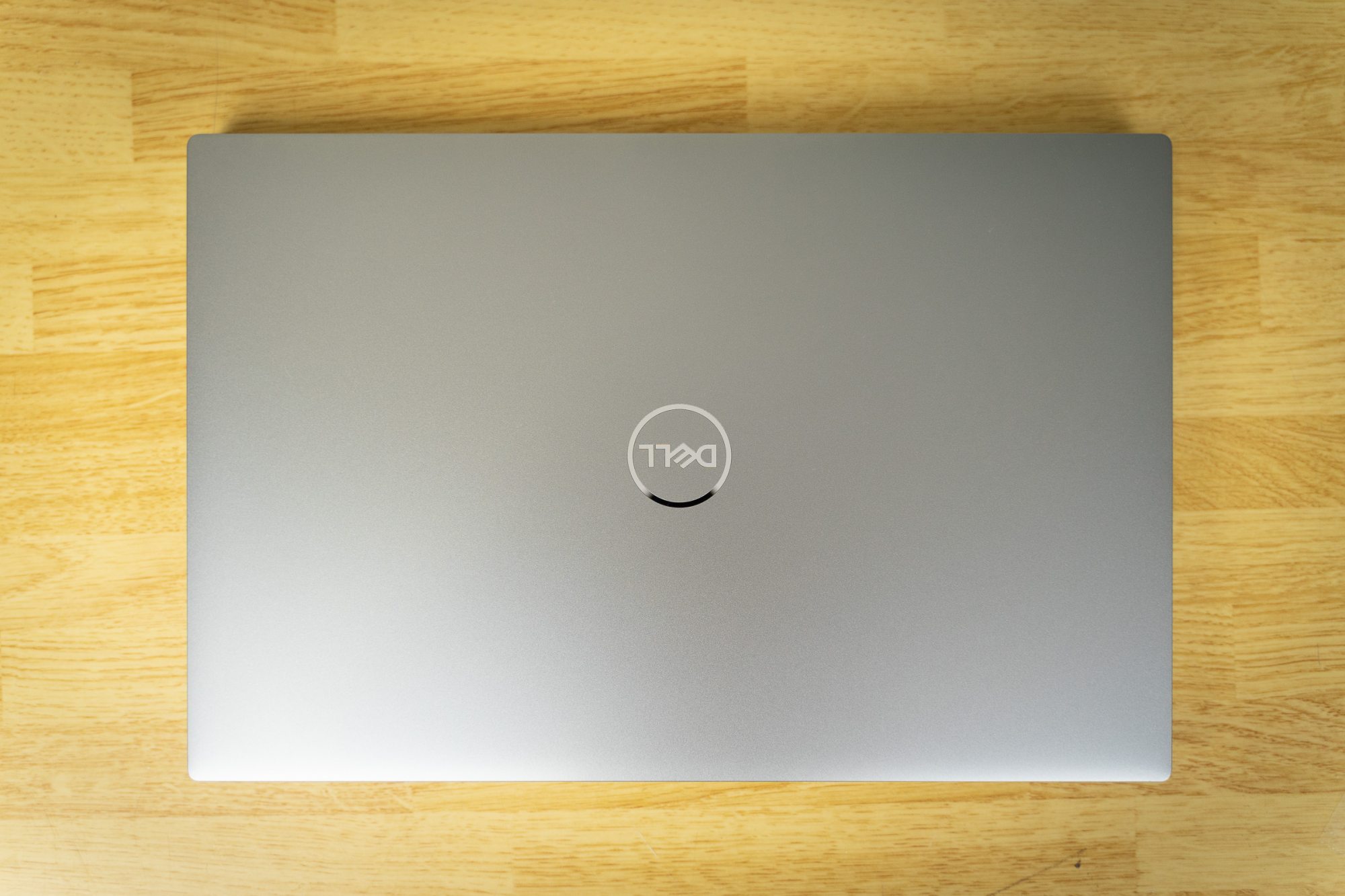 The Dell Precision 5550 is basically the workstation variant of the Dell XPS 15. It uses aluminum and carbon fibre to set a dual-tone color scheme. 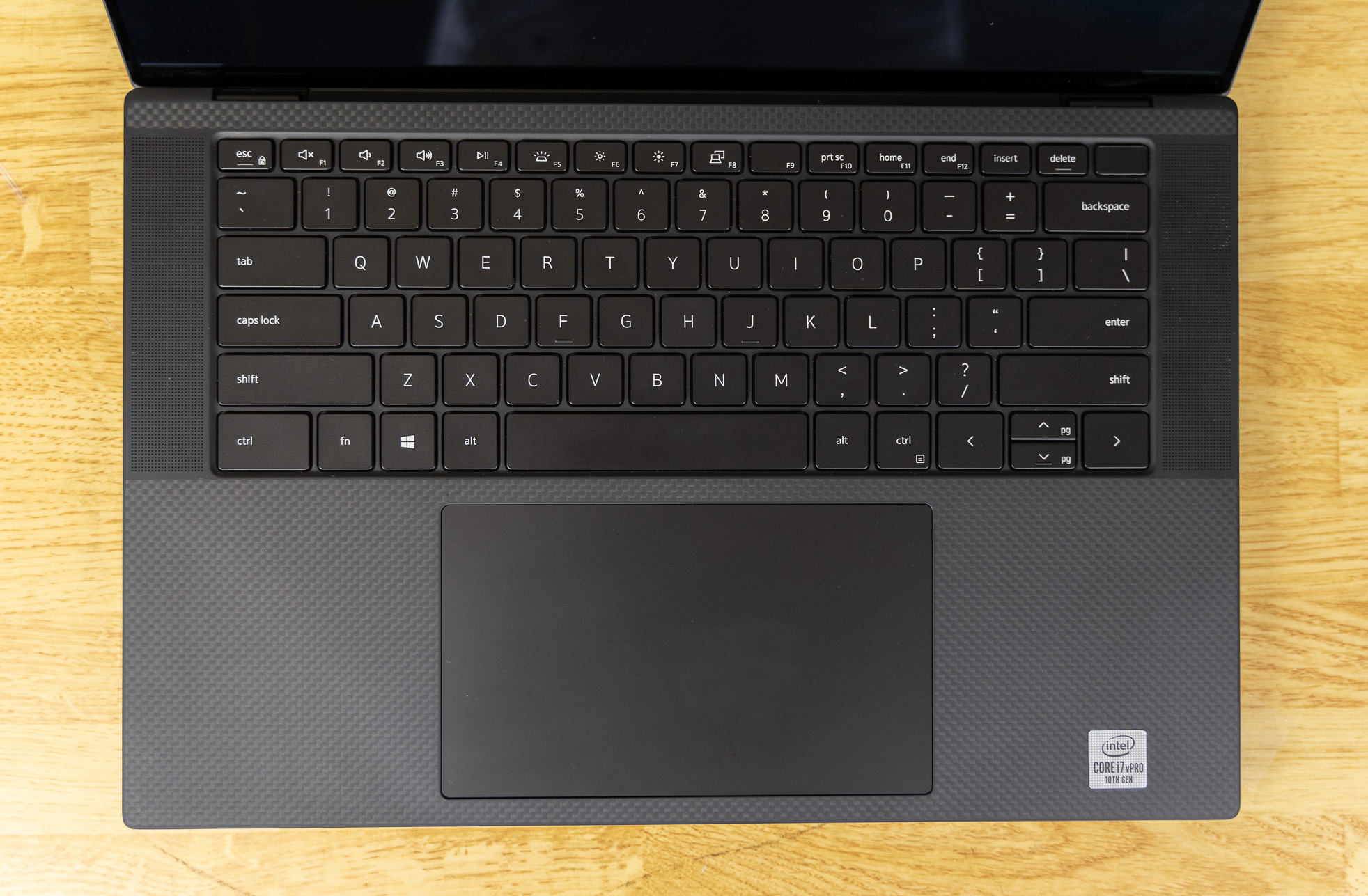 The matte interior presents a strong contrast to the shiny exterior. Inside is a full-size ANSI backlit keyboard flanked by front-facing speakers on either side. Underneath is an absolutely massive glass trackpad. 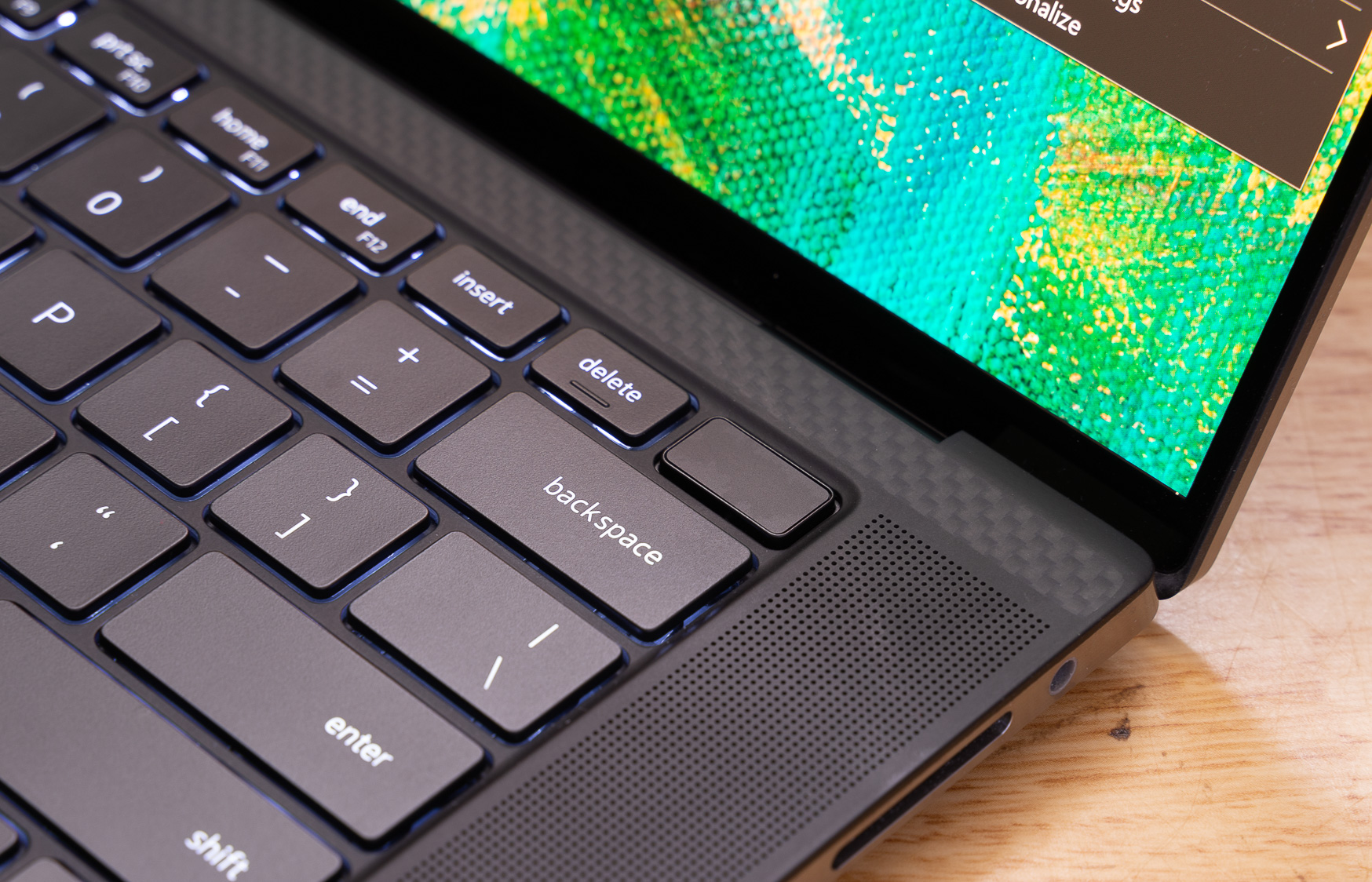 A fingerprint reader resides within the power button. 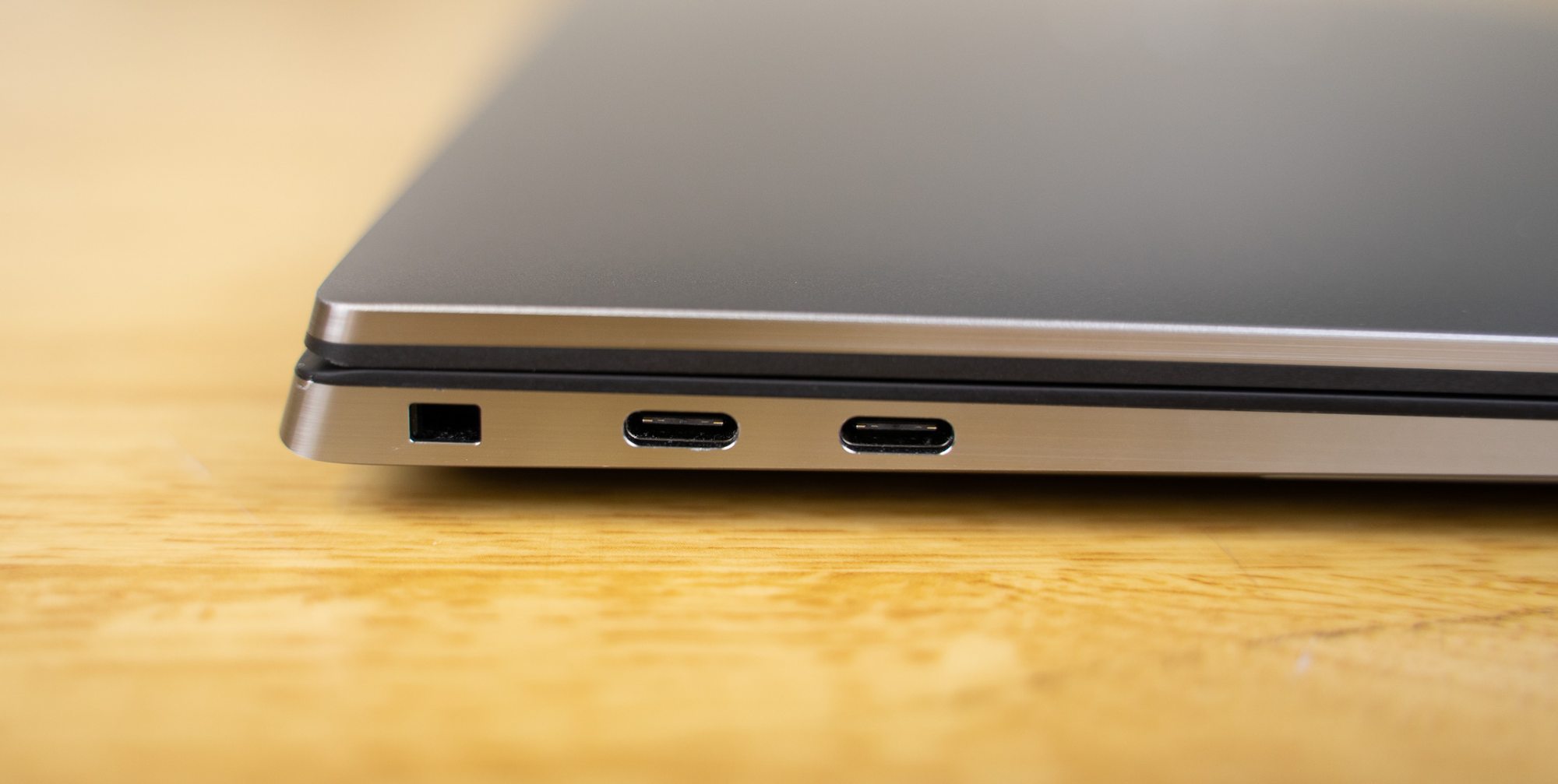 There are three USB-C ports on the device, two of which are on the left side. All three ports accept the charger. 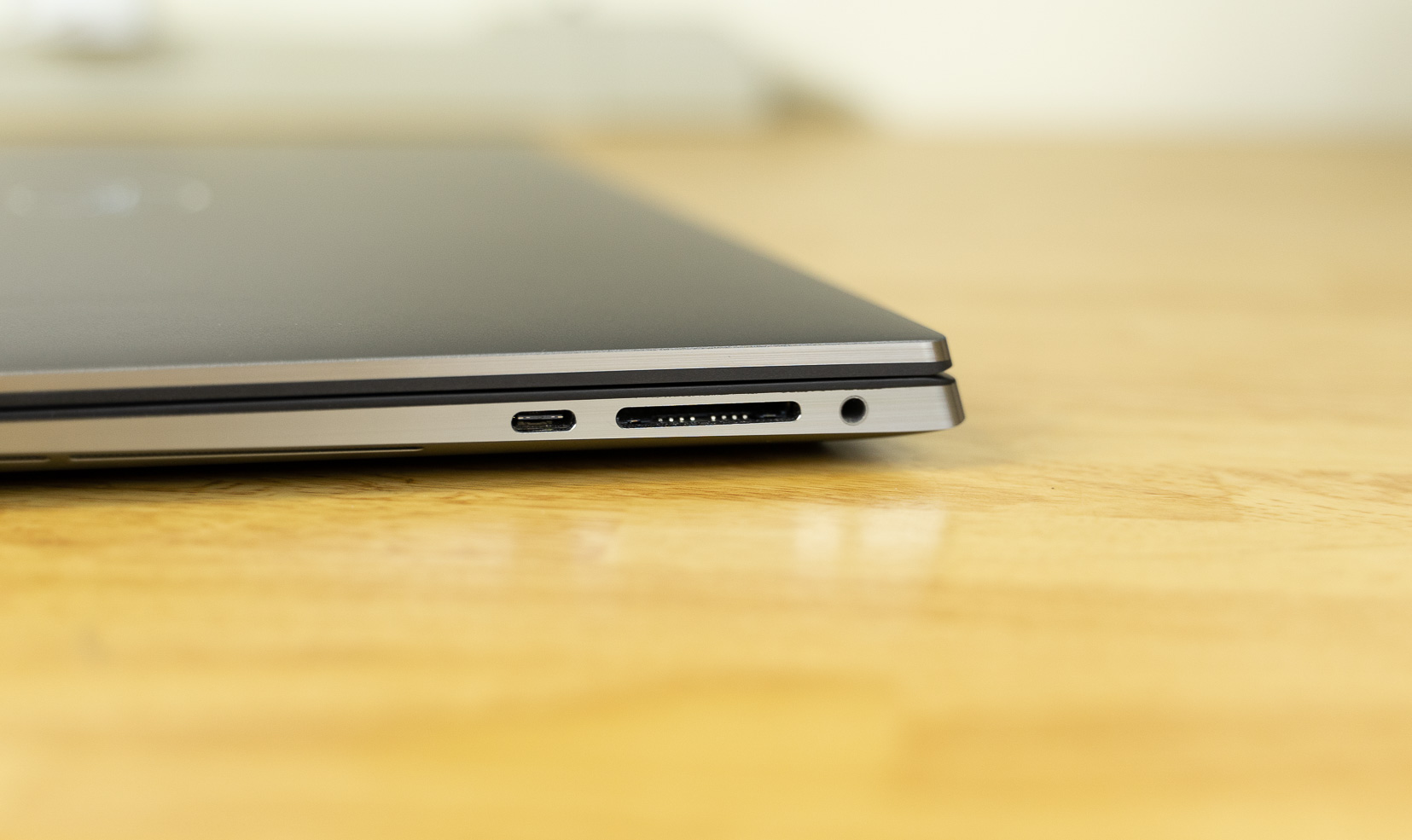 On the right side, the single USB-C port is paired with an SD card reader and a 3.5mm combo audio jack.

Although the port selection seems a bit short, Dell does toss in a USB-A and full-size HDMI combo adapter. 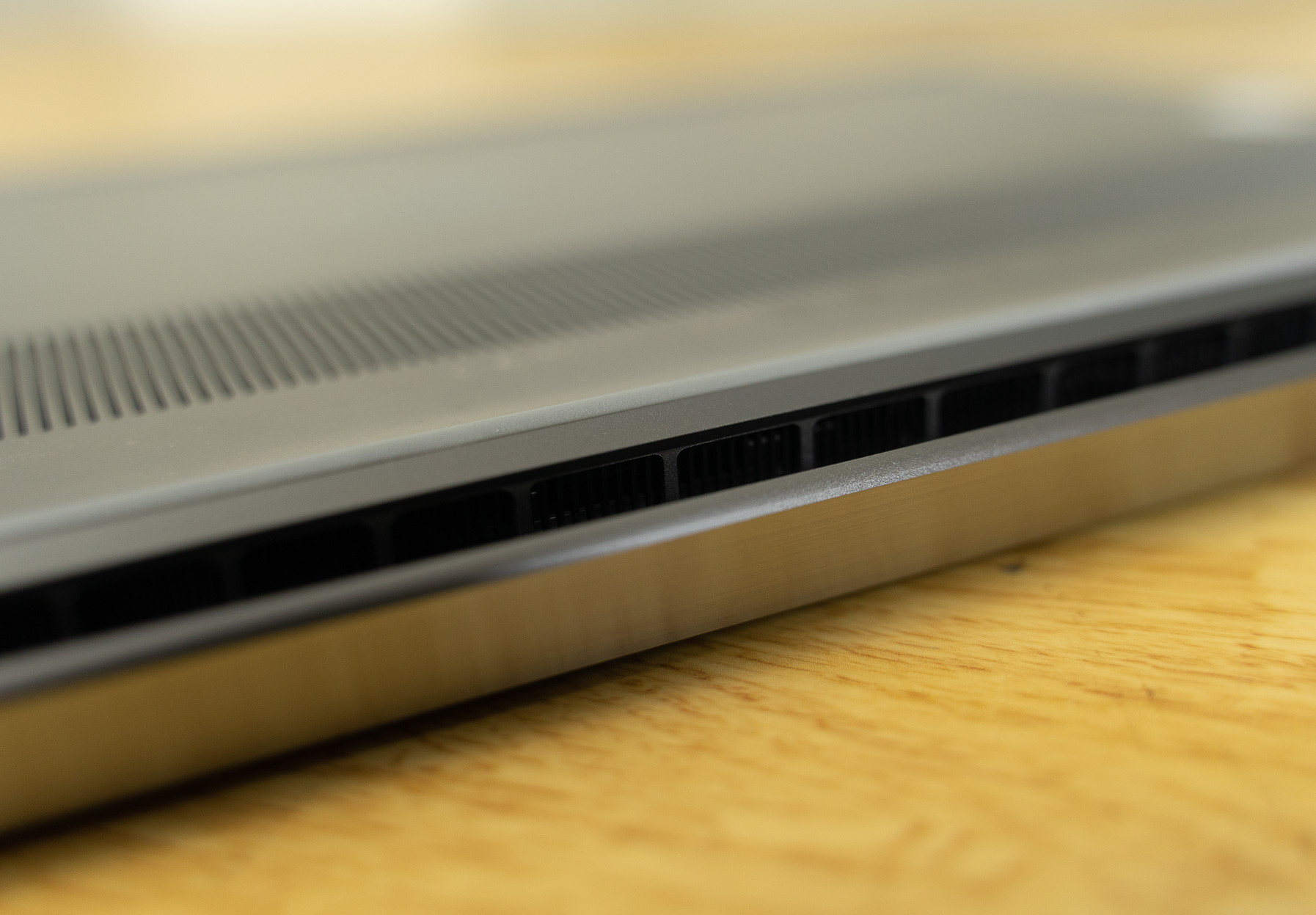 The two fans in the top corners of the device pull air inwards from the bottom grill and expel them from the rear vents. One potential downside to this (as with many other devices) is that your lap can block the underside grills, thus obstructing air intake. 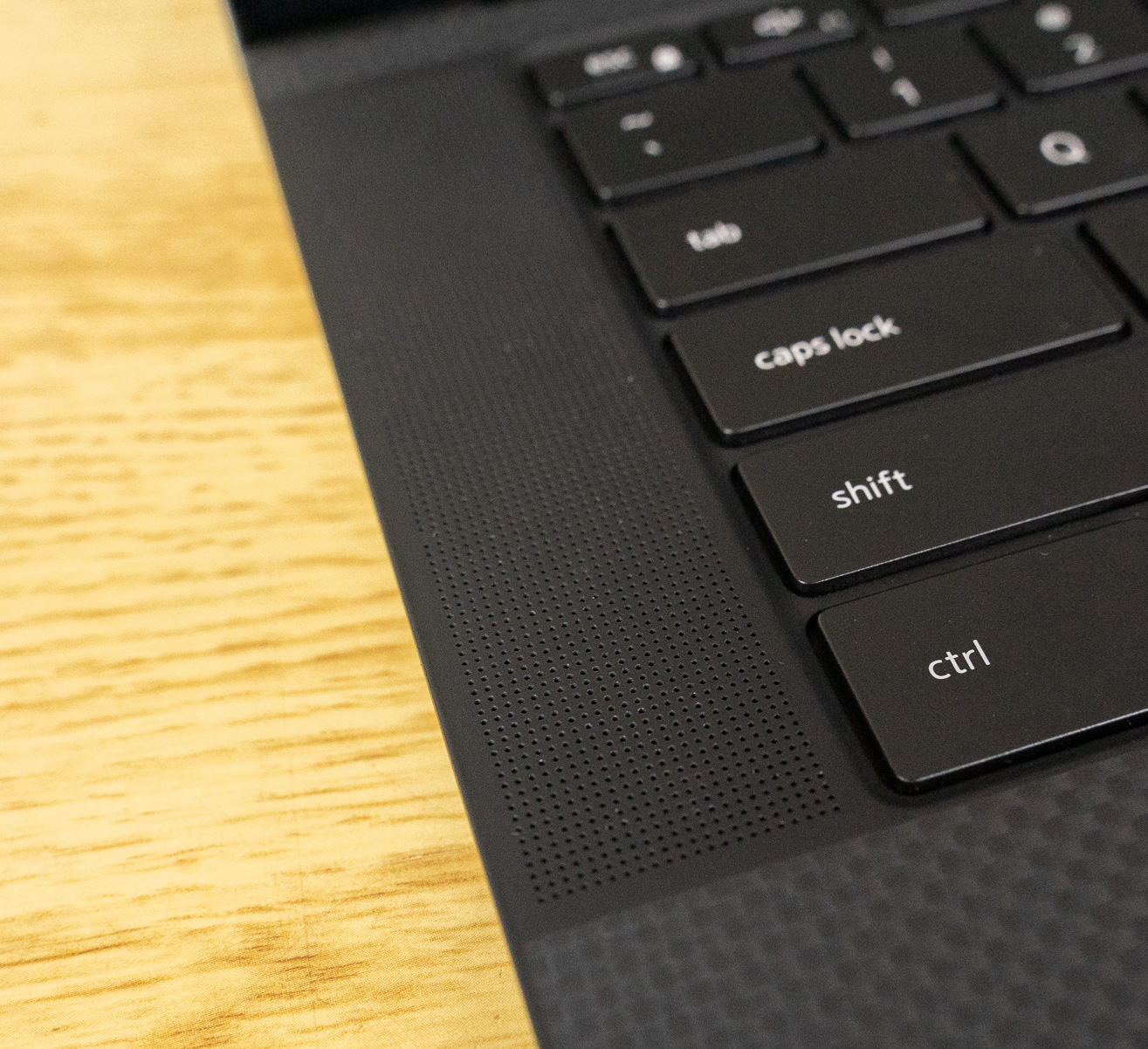 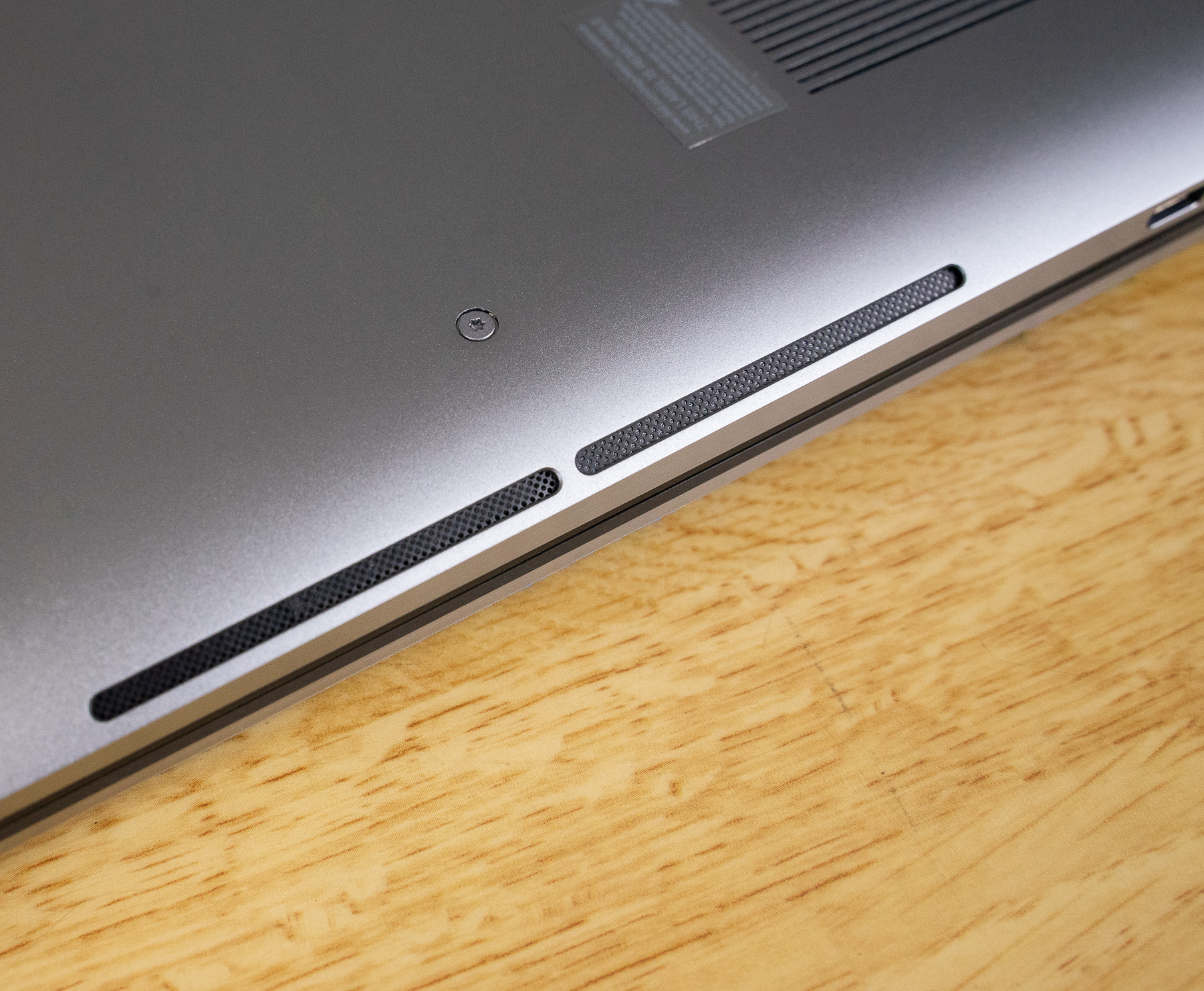 The speakers fire from the top and bottom. They’re loud for a laptop, but sound tinny and lacks bass. Although they’re far from studio-grade, it suffices for an impromptu movie binge or a conference call. 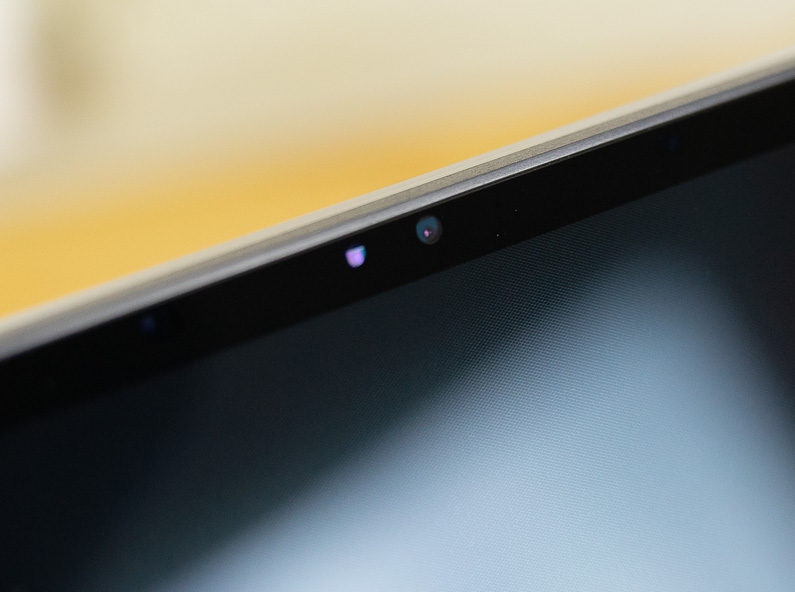 Webcams are now an essential work tool for the folks working remotely. Despite its razor-thin bezels around the display, Dell still stuck the webcam in the top bezel. This presents a better perspective of the caller. 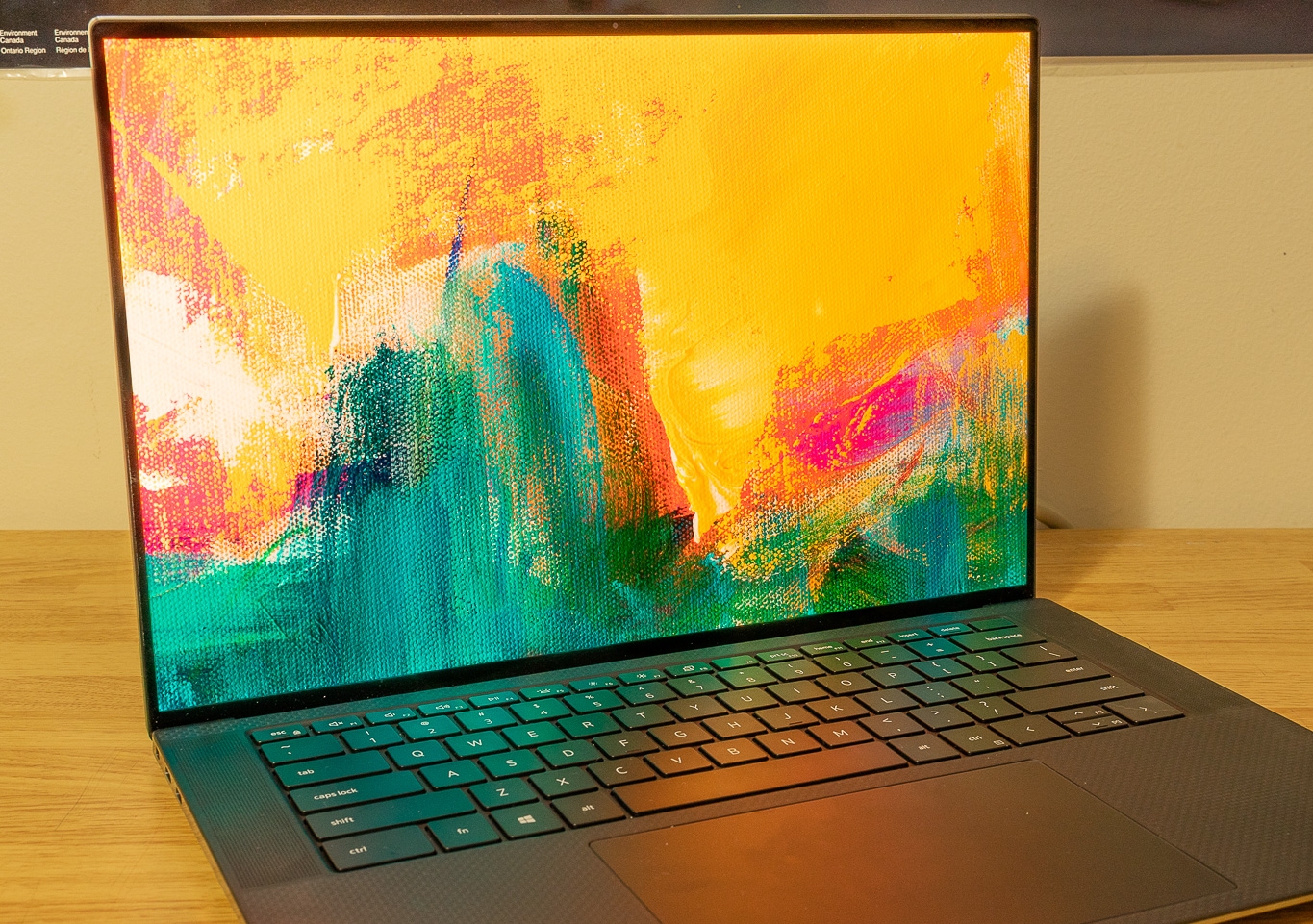 It’s not OLED, but the Precision 5550 sports a 4K HDR display. While the ultraportables we usually test sports excellent colour coverage in the sRGB colorspace, workstation laptops, especially high-end ones, need to aim farther. Photographers who work with print and video editors need a higher colour gamut to accurately edit their media.

The display’s peak 433 nits peak brightness easily overpowers the reflection from overhead lights. Dell has applied an anti-reflective coating to the glass, but it still exhibits a bit of soft glare.

The display is also compatible with the Dell stylus for those who need a precision touch. But because the screen doesn’t tilt back flat, it’s only limited to making minor adjustments and signing digital documents.

Whereas the consumer variant had an Nvidia GeForce GTX 1650 Ti, the Precision 5550 uses the Nvidia Quadro T2000 workstation card with 4GB of GDDR6. The two GPUs are practically identical, with the biggest difference being that the workstation graphics have verified drivers for common professional software. The drivers are also optimized for higher precision compute versus the consumer counterparts to speed up things like CAD and scientific calculations. 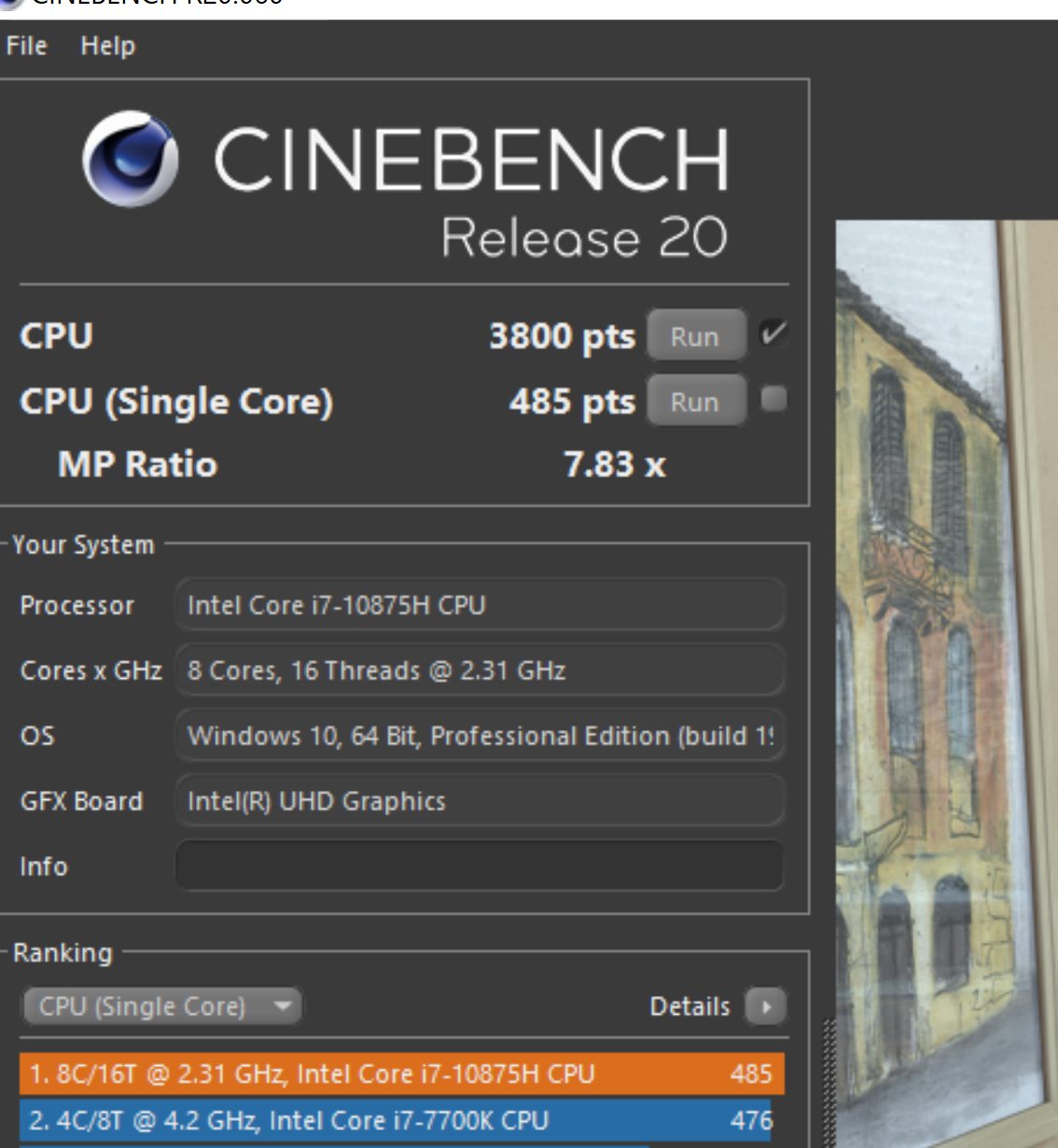 In Cinebench, the Intel Core i7-10850H reached an impressive 3800 points in multicore and 485 in single-core. This is roughly on the same performance level as Intel’s desktop Core i7-8700K.

Geekbench gives a snapshot of the processor’s performance in a burst workload. Its tests include image processing, compression, and encryption tasks.

The Nvidia Quadro T2000 is based on the Nvidia GTX 1650 Ti GPU. Due to its thin chassis, Dell used the Max-Q version of the Quadro T2000 GPU to keep the thermals more manageable. It dials back the base and boost clock to 1200MHz and 1620MHz respectively, down from the 1575MHz and 1785MHz of the non-Max-Q variant. By doing so, it’s able to cap the power consumption to 40W, down from 60W. 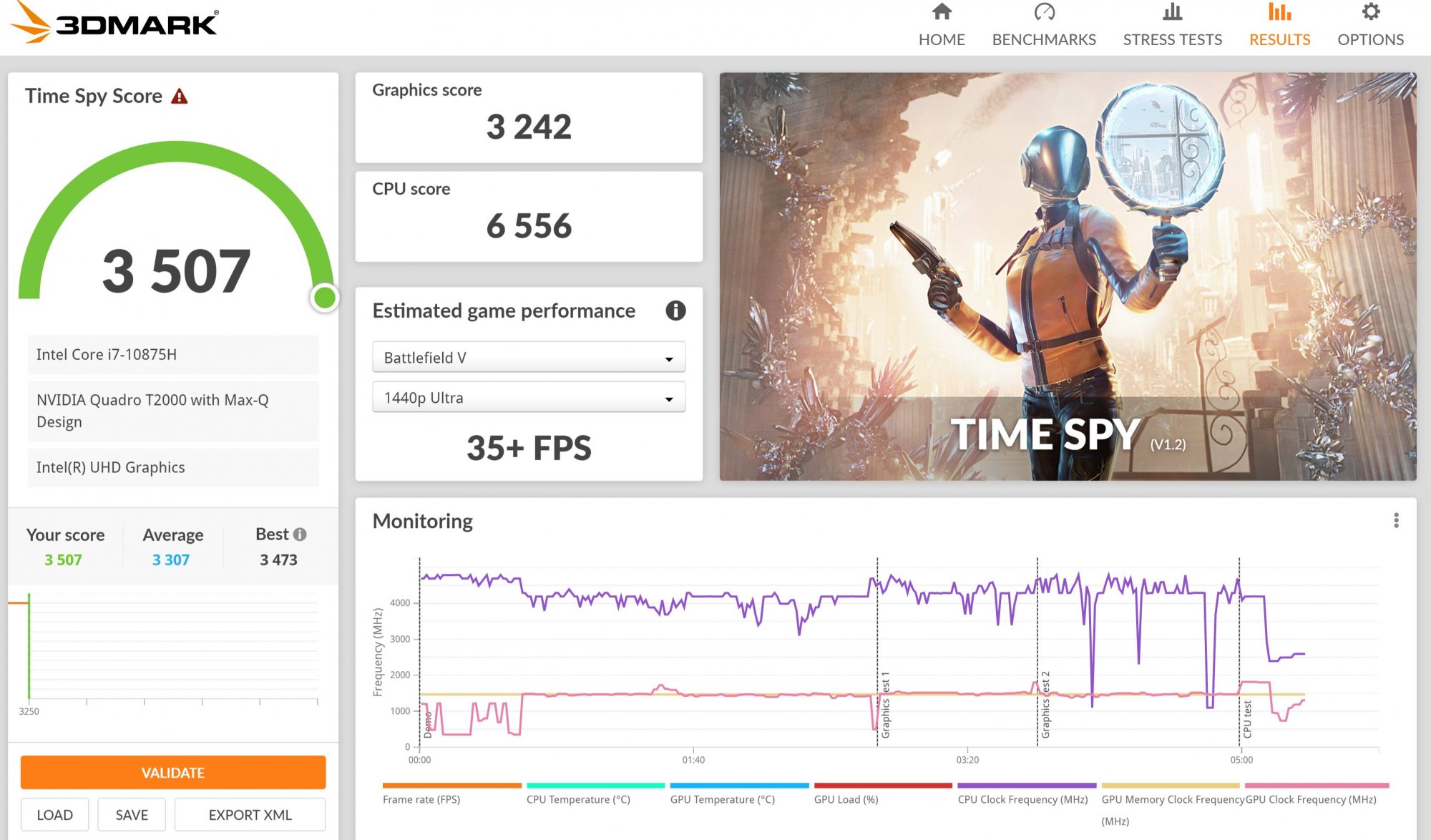 Contrary to my expectations, the Quadro T2000 doesn’t score too far off from the average graphics score of the GeForce GTX 1650Ti MaxQ in 3DMark’s TimeSpy database. Although the lower thermal envelope means slower clocks, it can still manage some light gaming on the side.

For the GPU, I selected Maya and 3ds Max, both of which are popular animation tools.

Blender is a rendering benchmark like Cinebench and uses its own Cycles rendering engine. 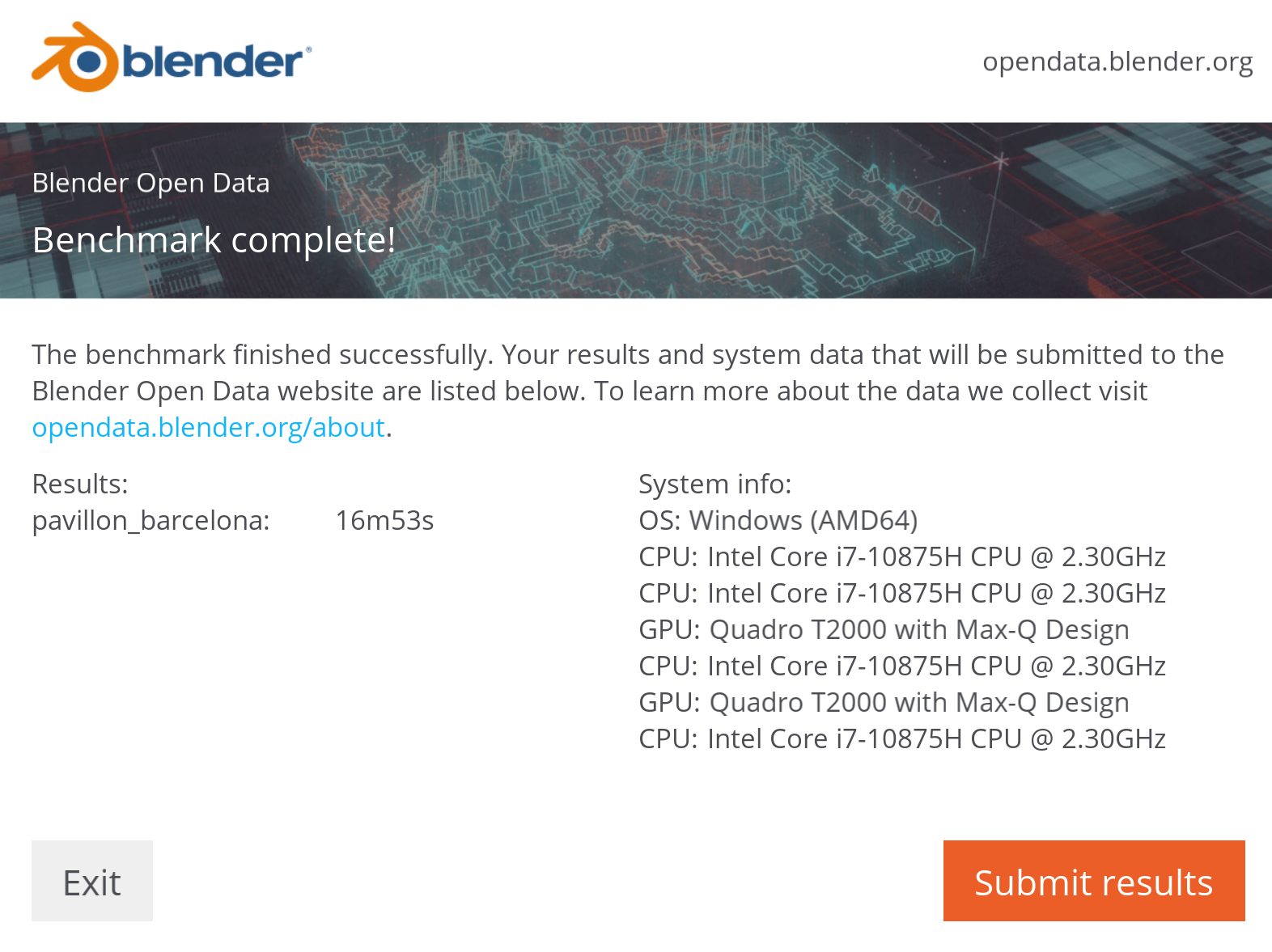 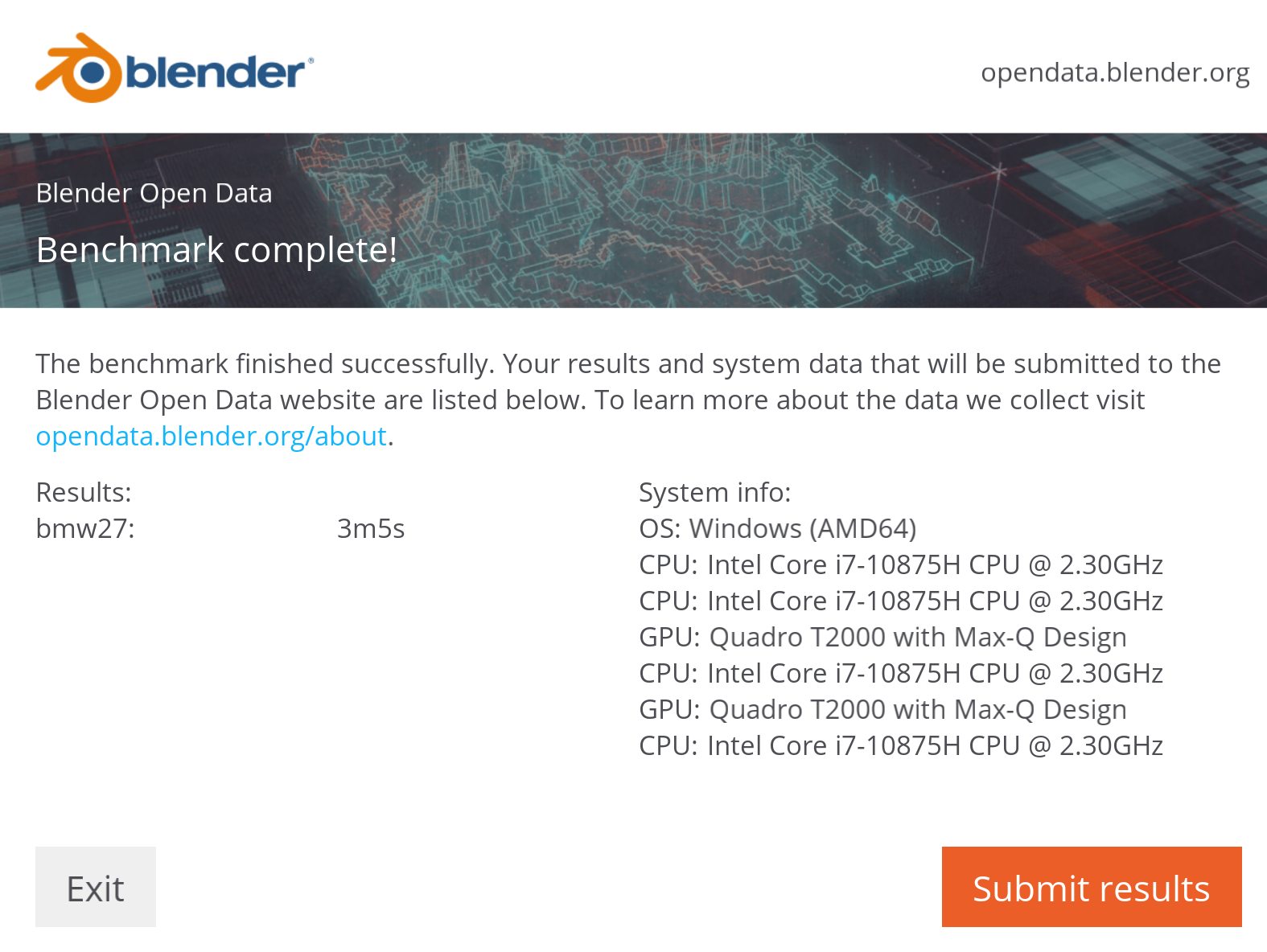 According to Blender’s database, the Nvidia Quadro T2000 Max-Q scored around the media rendering time of the other T2000 Max-Q in other designs.

UL’s PCMark 10 puts the device through a series of tasks like web browsing and writing, things that a user would do during their daily routine. 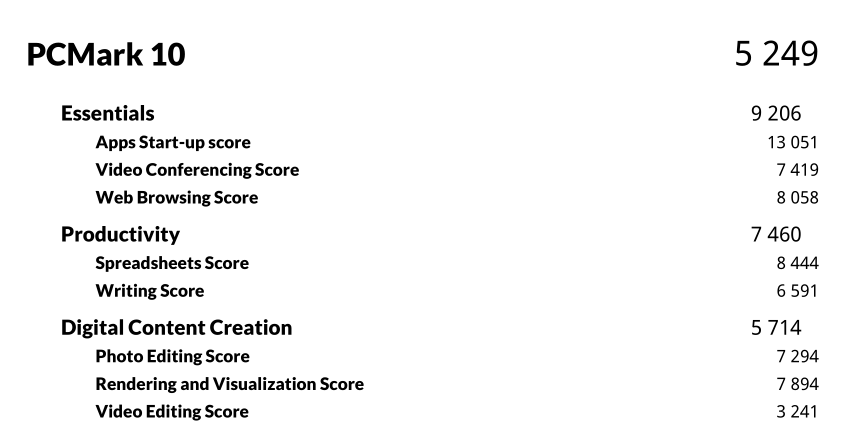 Precision 5550 crushes this test, to no one’s surprise.

The Precision 5550 has two M.2 slots that can operate in RAID mode. Drive selections also include options with Opal self-encryption as well. 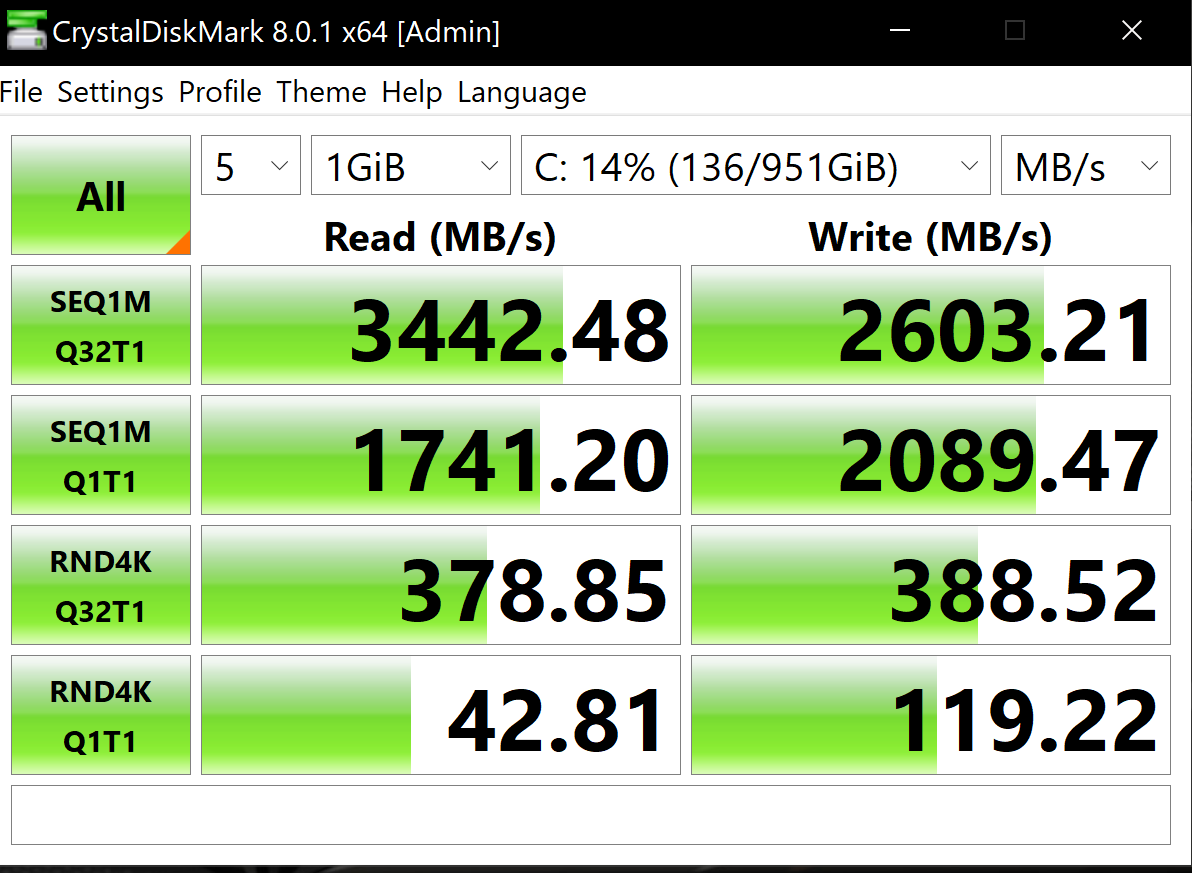 The 1TB SSD boasts excellent performance across all metrics.

The Precision 5550 managed 9 hours in the UL PCMark 10’s battery test, a respectable score for a workstation laptop. Although PCMark 10’s battery test provides a good mix of web browsing, general productivity and editing workloads, it doesn’t simulate the workload of someone who pushes the laptop to the limit day in and day out. For those who fall into that category, it’s a safe bet to keep it plugged in.

Being a 15.6-inch laptop, the Precision 5550 has plenty of room to fit in a comfortable keyboard and a massive trackpad. Seriously, the trackpad is larger than my Pixel 4XL. Its size makes sense, however, as editors and designers sometimes have to make edits at very low mouse sensitivity. A large trackpad can reduce the number of times they have to lift their fingers. It’s the small details that matter. 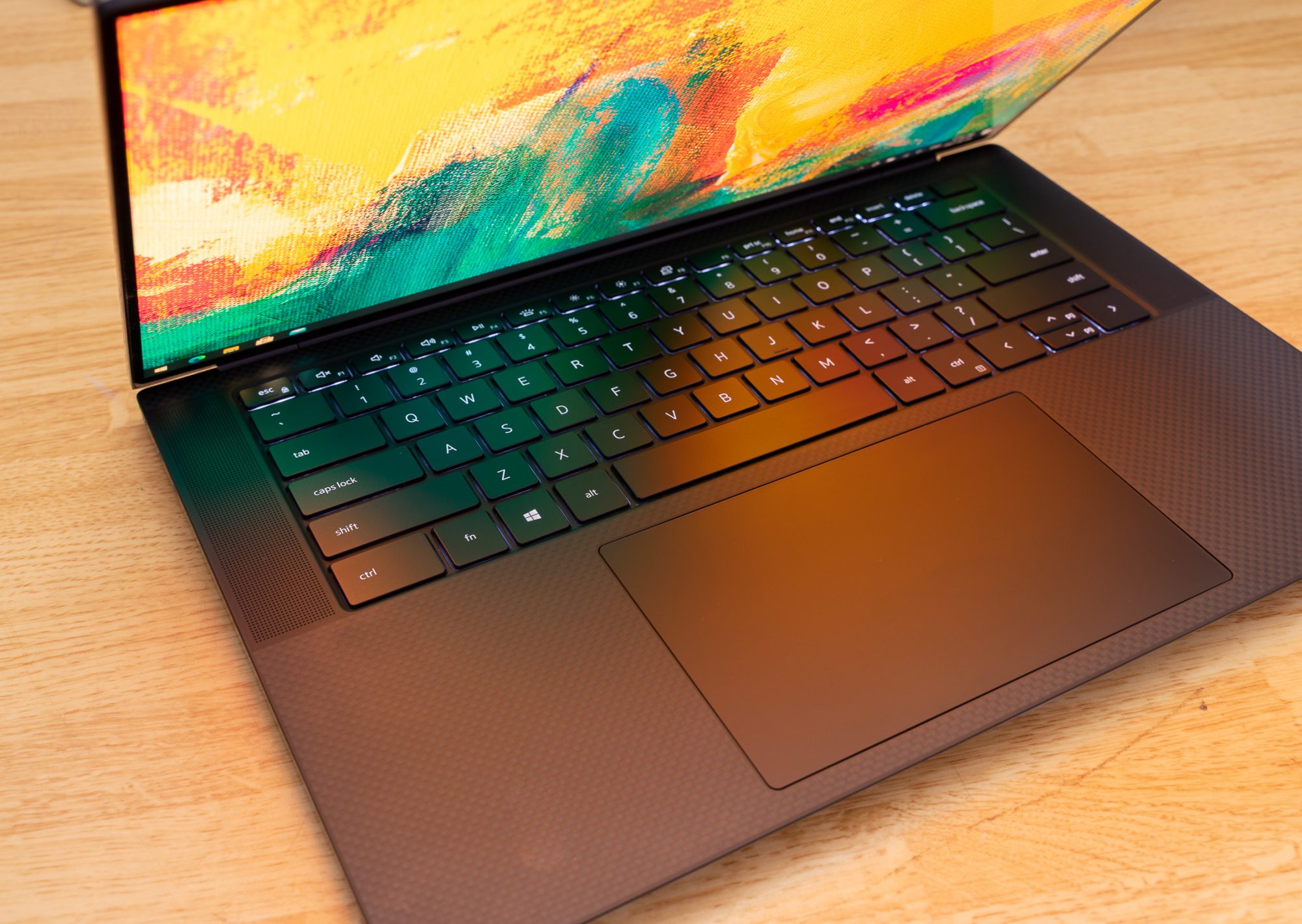 There’s nothing to complain about when it comes to its accuracy either. Whether it’s at the edge or at the center, my mouse pointer never went haywire and always stayed on target. Its left and right click buttons are tactile and quiet.

The keyboard has its ups and downs. On one hand, it’s responsive and has solid key travel. On the other hand, The plastic keycap feels flimsy and thin. But with a full-size ANSI layout, mild backlighting and no key wobble, I’m willing to overlook this marginal shortcoming.

During day-to-day operations, the processor frequency bounces between 800MHz and 4.8GHz. Fan noise almost never reaches a distracting level during light productivity and streaming. With this workload, the processor temperature is around 50 °C, but the exterior is much cooler, usually in the low 30°C range.

When a program loads all the cores for an extended period of time, the frequency fluctuation narrows to a 2.6GHz min and 3.7GHz max. The clocks continued to rise and fall due to cooling, and eventually smoothed out to a steady state of around 3GHz after 15 minutes in AIDA64’s stress test.

Under load, the processor occasionally hits 100°C, at which point the fan kicks into overdrive. This is the only time when the noise becomes distracting. After the initial burst, the CPU frequency is throttled, and the temperature levels out to around 80°C. The fan noise then drops to a much more acceptable level. While it shouldn’t rest next to your pillow when you’re rendering overnight, leaving it across the room won’t keep you awake.

The internal heat spills outwards, noticeably raising the temperature in the keyboard area. Under stress, the top centre of the keyboard reached 47°C, which can feel excessively warm. The palm rest areas were cooler at around 40°C. The underside didn’t become completely unbearable, though, measuring 40°C.

The Dell Precision 5550 strikes a good balance between portability and big performance. With a powerful processor and an Nvidia Quadro T2000, it offers professionals a lightweight laptop that won’t break the back.

Tom Li
Telecommunication and consumer hardware are Tom's main beats at Channel Daily News. He loves to talk about Canada's network infrastructure, semiconductor products, and of course, anything hot and new in the consumer technology space. You'll also occasionally see his name appended to articles on cloud, security, and SaaS-related news. If you're ever up for a lengthy discussion about the nuances of each of the above sectors or have an upcoming product that people will love, feel free to drop him a line at [email protected]
Previous article
Barracuda updates Cloud to Cloud Backup platform to match Microsoft Office 365 growth
Next article
Fujitsu’s PFU Canada: Unlocking the flow of information