Dell released the Latitude 7320 Detachable on April 27 to give mobile enterprise users a more flexible option, and to steal some spotlight from Microsoft‘s Surface devices.

The device’s focus on portability shows in its weight. Without the folio keyboard, the Latitude 9320 weighs just 851g (1.82 lbs). Although tacking on the keyboard adds 351g, the total weight is still just a smudge over a kilogram.

The Latitude 7320 Detachable’s touchscreen display supports an active pen for digital signatures, markups, and drawings. Sporting a 3:2, 1920×1280 panel, the display is rated for 500 nits brightness and is protected by Corning Gorilla Glass 6 DX. In addition to being scratch-resistant, the glass also reduces glare.

Like the other members in the Latitude family, the Latitude 7320 Detachable can be configured with up to an Intel’s 11th-gen i7 vPro processor. Dell capped the memory capacity at 16GB but does offer various storage configurations between 128GB and 1TB SSDs. The device relies on the Intel Iris Xe or Iris UHD integrated graphics. 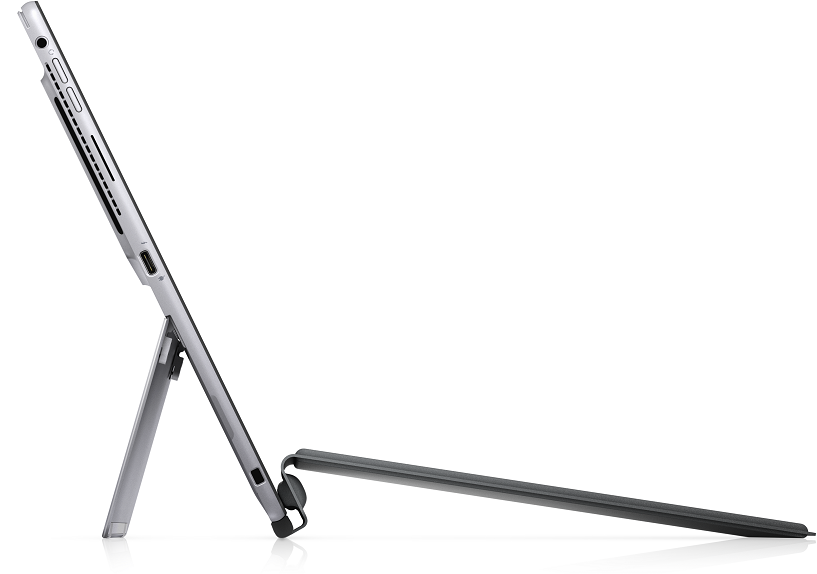 The Dell Latitude 7320 Detachable props itself up using a foldable hinge. The keyboard attaches to the PC magnetically and has a tray for the pen.

One compromise with such a compact device is the lack of ports. The Latitude 7320 Detachable comes with two USB-C Thunderbolt 4 ports, an audio jack, an optional external micro SIM card tray, an optional SmartCard reader and an optional fingerprint reader. While these seem anemic compared to traditional clamshell designs, it’s in line with competing devices in similar form factors.

The Latitude 7320 Detachable comes with a 2-cell 40Wh polymer battery. Dell says its ExpressCharge Boost technology can deliver 35 per cent charge in 20 minutes or 80 per cent charge in an hour. The device can be charged through either USB-C port.

For conferencing, the device is equipped with a 5MP 1080p front-facing camera, an optional 8MP 1080p rear-facing camera, stereo speakers and dual-array microphones.

Dell also put thoughts into the stylus and keyboard. The active pen charges to full in 30 seconds and lasts 90 minutes. The folio keyboard is encased in brushed aluminum and synthetic suede with a magnetic hinge. Unfortunately, both the pen and the keyboard are separate purchases.

The Dell Latitude 7320 Detachable is available now starting at US$1,550 (~CA$1,922). Although the PC itself isn’t listed on Dell’s Canadian page yet, its folio keyboard and the pen are. They’re selling for CA$260 and CA$90 respectively.