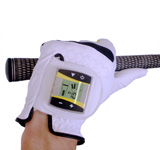 There is no sport on Earth that uses technology to the max than the game of golf. Take for example the digital golf glove from Sensoglove.

The Sensoglove digital golf glove is made of cabretta leather just like other top-flight golf gloves, but just near the wrist area there is a built-in computer that constantly reads your grip pressure.

According to the company, using a small sensor the digital glove provides audio and visual feedback about a player’s exact grip pressure on the club.

Sensoglove officials say that every golfer wants to hit the ball far and the natural instinct is to swing harder and faster. But trying to swing with more power causes what the company calls “a death grip”. The death grip creates tension in the hands, wrists, arms and shoulders. The result is a less than smooth swing and tightened muscles. Tight muscles results in slower club head speed, the company said.

Just in time for Father’s Day, Sensoglove is reducing the price on its digital golf glove by 20 per cent. It normally retails for $89. Father’s Day is June 16th this year, which is three months away but I guess better early than never.

I’m sure other golf products such as the Benderstik, the Stand-up putter, EZ Par, the HammerX driver and the Sensi Grip made the same claims.

CDN Staffhttps://channeldailynews.com
For over 25 years, CDN has been the voice of the IT channel community in Canada. Today through our digital magazine, e-mail newsletter, video reports, events and social media platforms, we provide channel partners with the information they need to grow their business.
Previous articleWhat’s trending D&H style
Next articleStorage saga on personal clouds