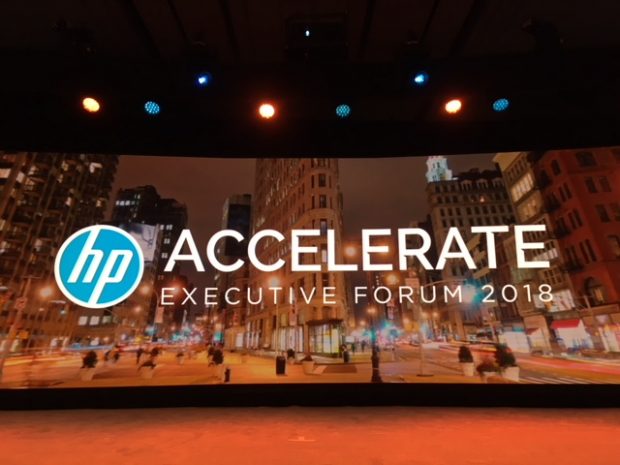 HP Inc. was in the red in just about every category possible in 2016, but fast forward two years later and the company is solidly in the positives, posting high growth every quarter and gaining market share at a record pace.

But according to CEO and president Dion Weisler, HP isn’t letting all the success get to its head. “My biggest fear isn’t our competitors, it’s becoming arrogant and complacent,” Weisler told the crowd at the company’s Accelerate Executive Forum 2018 in Las Vegas on Apr. 11.

Somewhat ironically, he and HP’s Americas president Christoph Schell then dove into just how much the company grew in Q1. Overall revenue, personal systems, services, printers, and A3 all saw double-digit growth, and HP grew 10 per cent year-over-year.

“Our fantastic 2017 fiscal year – and now 2018 Q1 – has painted a target on our back. We need to stay razor sharp in protecting our business and investing in the future,” Schell added.

To do that, HP has set its sights on helping its partners and customers towards their digital transformation journey, focusing on four key technologies or approaches:

Everything-as-a-Service – “This is essential to any digital transformation strategy. It gives customers the opportunity to move away from big one-time lump payments to more manageable subscriptions, which on the partner side, also locks down business for years,” Schell explained.

Virtual reality – “There is tremendous promise in VR; in fact, I think the commercial opportunities outweigh the consumer ones. Imagine doctors being able to simulate surgeries before actually doing them, armed forces using VR to prepare for combat safely, remote project teams collaborating together in VR environments. The possibilities are endless.”

Retail point-of-sale – “We’ve had another stellar year selling POS systems and we are going to continue that. We won Nike’s retail business just in time for the World Cup this summer, which we’re also supporting with our technology. We also have deals with JC Penney, Best Buy, Arby’s, and Little Caesars, to name a few.” Endpoint security – “Security is at the heart of everything HP is doing. There was a 48 per cent increase in cyber attacks globally last year, and just four months into 2018, we’re already up 20 per cent. Security is a $3 trillion industry. Endpoints are the most exposed, so we’re making sure all our products have security built in. It’s a huge differentiator for us and we’ve heard from partners that it’s a door opener for discussions with C-suite execs.”

“Our strategy hasn’t changed drastically over the last four years, but the world around us has. Our goals are to drive accelerated growth for our partners, invest in the future, and win the right way,” Weisler said.

That means helping HP partners become “more sophisticated and digitally-enabled” because those are the partners growing the fastest, according to the CEO. HP is investing in the future by betting on new tech like 3D printing and VR, but “it’s not just about revenue and profit.”

“We also measure our success by our impact on sustainability and the environment, how we increase diversity and inclusion, and our ability to invest in communities at a local level. We want to win the right way because it’s not just the right thing to do, it’s also a business imperative. Sustainability drives growth,” he added.

Most employees, particularly young ones, genuinely care about sustainability and want to buy from brands that do good, Weisler continued. As a result, HP has seen an increase of 38 per cent in deals with a sustainability requirement in the last year and over a billion dollars in revenue where sustainability was a key driving factor.

Where do channel partners fit into it all?

HP is a channel partner-driven company and they weren’t left out of the keynote. Stephanie Dismore, channel chief of the Americas, spent her opening remarks thanking channel partners for their role in driving double-digit growth in every category, and Ron Coughlin, president of personal systems, echoed these thoughts.

“We’ve gained seven share points in the premium personal systems market since 2013 and we’re now number one in both commercial and consumer PCs. We grew 11 per cent in 2017 to $3.4 billion dollars, which is more than our biggest competitors. Almost $3 billion of that came from channel partners,” Coughlin pointed out.

Mandy Kovacshttp://www.itwc.ca
Mandy is a lineup editor at CTV News. A former staffer at IT World Canada, she's now contributing as a part-time podcast host on Hashtag Trending. She is a Carleton University journalism graduate with extensive experience in the B2B market. When not writing about tech, you can find her active on Twitter following political news and sports, and preparing for her future as a cat lady.
Previous article
HP teams up with Aon to tackle cyber risks with new security solution
Next article
HP disrupting manufacturing with 3D printing technology; channel partners will need to ‘specialize’ to sell in Canada