Ottawa PC vendor Eurocom is making a play for the high performance ultraportable space with the Eurocom M3.

Weighing-in at 4.4 lbs. and measuring 1.2” thin, the M3 is powered by Nvidia GeForce GTX 765M graphics and 4th generation Intel Core i7 processors, as well as 2GB of GDDR5 memory and has support for Optimus 2.0. 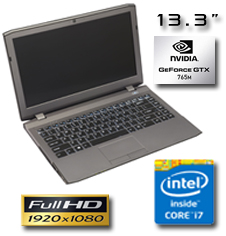 “The Eurocom M3 is the smallest and most powerful gaming system we have ever created, gamers will be very pleased,” said Eurocom president Mark Bialic, in a statement. “What really sets the M3 apart from the competition is the combination of pure performance, ultra portability, upgradeability and storage support of two mSATA Solid State drives and another standard storage drive.”

The M3 has a 13.3″ Full HD 1920×1080 eDP display and supports two mSATA storage devices and one standard storage drive for a total of 1.96TB of storage with RAID capability. Up to 16GB in DDR3-1600 memory can be supported via two slots. There’s also an integrated Trusted Platform Module 1.2 to keep keys, password and digital certificates more secure.

It’s available now, with pricing starting at $1199 for a base configuration.