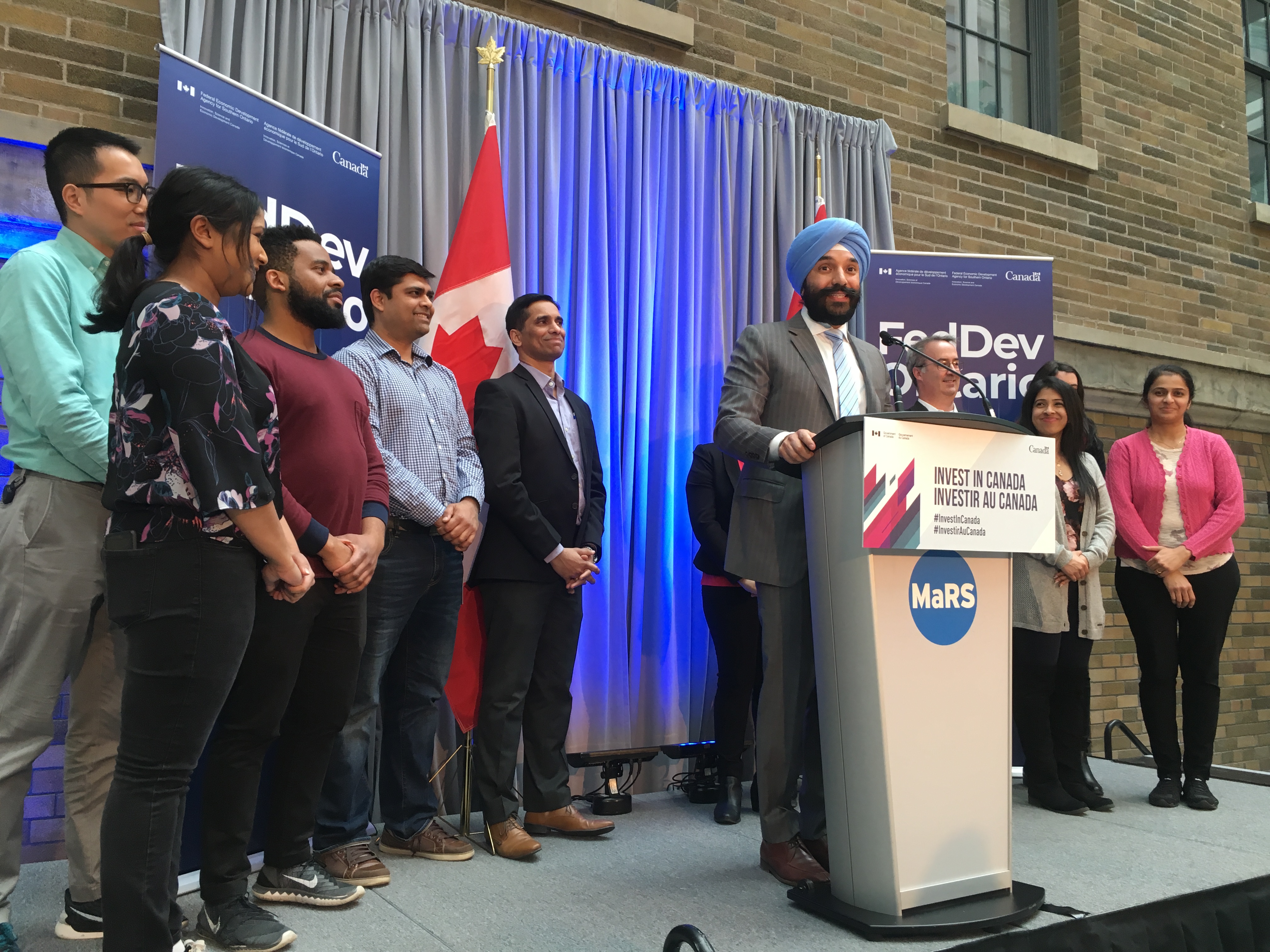 The Canadian federal government announced a $52.4 million investment into a growth and innovation network Tuesday to help businesses scale up; signaling its support for the growing tech industry in Canada.

The investment, which was announced at a press conference in Toronto by the Honourable Navdeep Bains, Minister of Innovation, Science and Economic Development, is focused on creating a network to support businesses scaling up in the Waterloo-Toronto-Ottawa area by bringing together three large innovation hubs: Communitech, MaRS Discovery District and Invest Ottawa.

“We as a government are focused on economic growth and job creation. Those are the driving factors,” said Bains in an exclusive interview with IT World Canada. “And part of that is attributed to investments in infrastructure…and part of its attributed to innovation as well. We want to focus on successful Canadian companies that are growing and scaling. Because the more that they grow, they bring in more investments, they create more jobs, they become more competitive globally.”

The funding will be doled out pretty evenly across the three hubs. Invest Ottawa is slated to receive $16.9 million, Communitech will get $18 million and MaRS Discovery District will get $17.5 million.

“By partnering with these top innovation hubs with a demonstrated track record of scaling up innovative companies, we are giving innovators in this ecosystem every chance we can to scale up, strengthen their footing at home, and compete in global markets,” said Bains.

The goal of the investment is to allow the three hubs to facilitate 30 Ontario businesses to scale up and achieve revenues of $100 million or more by 2024; which the government says will contribute to the creation of 18,000 new jobs.

“While Canada’s enjoying a moment on the world stage, we have to take advantage of this moment. Others are turning inwards while Canada is now a destination for the world’s best and the world’s brightest, due to many of the policies that we have seen from this government. Top international talent is finally flowing north. We’re gaining brains not training them today,” said Yung Wu, the chief executive officer of the MaRS Discovery District. “Top investors, international companies, new companies that could be this generation’s Google or Apple. They’re making their home here now. They’re all creating this unique ecosystem. And the network effect that’s coming with that is the key to this entire picture. Strong support for innovation and jobs and a growing culture of tech entrepreneurship are making Ontario – Toronto specifically – the fastest growing tech market in North America.”

In fact, statistics from CBRE Group Inc. show that Toronto brought in more new tech jobs in 2017 than any other city in North America.

Bains’ announcement Tuesday comes on the heels of Monday’s reveal of the first three companies to receive funding through the $700 million the federal government invested in the National Research Council of Canada Industrial Research Assistance Program (NRC IRAP).

The three investments, totaling $5.2 million, have been awarded to Applanix Corporation (a technology firm based out of Richmond Hill developing navigation software for autonomous vehicles), Opus One Solutions (a firm that specializes in energy conservation technology based out of Toronto), and Hibar Systems Limited (a Richmond Hill-based company that is developing a high-speed lithium-ion battery manufacturing system).

Bains said these companies displayed a goal of creating innovative solutions to the world’s problems while achieving economic growth that will create jobs for Canadians in the near future.

The investment in these three companies will create 36 new jobs in the GTA, according to the federal government’s press release, but Bains alluded to an impact that will reach far beyond those 36 jobs.

“Every job matters because there’s a spin-off. For every one strong tech job there’s a lot of supporting indirect jobs as well. So the idea is we want to create an incredible ecosystem. As I highlighted earlier today, Toronto has created more jobs in the tech sector than Seattle, Washington, DC, and San Francisco combined. So that’s a point of pride for us. That kind of job creation has enormous benefits, not only for the tech sector but all the other industries and all the other businesses that support the tech sector.”

Buckley Smithhttps://www.itbusiness.ca
Staff writer for IT World Canada. Covering the world of technology as it applies to business. Buckley is an avid sports fan who loves travel, food, and music. Can be contacted at [email protected] or 416-290-2000.
Previous article
Everything you need to know about 5G
Next article
SADA Systems opens Toronto office to provide better support to Canadian clients

ITAC puts forth suggestions for ICT industry in 2019 federal budget