Attendees at the recent GTEC conference in Ottawa got an inside look at the federal government’s aggressive timelines for government-wide move to shared services and overhaul of its technology platforms, from e-mail to security and networking.

In a presentation called “IT Service Transformation – a View from inside the Government of Canada” by Benoît Long, senior assistant deputy minister for transformation, service strategy and design at Shared Services Canada, attendees got an update on the shared service transformation that began in the 2011 budget when the government issued a mandate to deliver e-mail, data centre and network/telecom services to 40 government institutions representing 95 per cent of federal IT infrastructure spending.

Long updated progress over the past year on four fronts. With e-mail, the procurement process was reformed and went to tender, and a contract was awarded in June to Bell and CGI Systems. With telecommunications, cabinet support for the transportation plan was gained in June, an industry engagement day was held in July, and to date the Government Enterprise System has been implemented in 130 of 3850 buildings. With data centres, following cabinet support for the transformation plan in June and an industry engagement day in July, a consensus was developed with industry in fundamental directions on technology and service orientation. And with cyber and IT security, a two-step procurement process to strengthen supply chain integrity was launched in January.

More interesting though was the roadmaps Long reviewed for transformation in e-mail, data centre, networks, cyber & IT security and workplace technology devices, through Fiscal 2020.

The timlines reveal the email transformation will happen in three waves, compete by the first quarter of Fiscal 2015/2016. A BlackBerry 10 pilot is also underway at Treasury Board, Foreign Affairs and Shares Services, with a government-wide rollout to follow, taking just over one year. 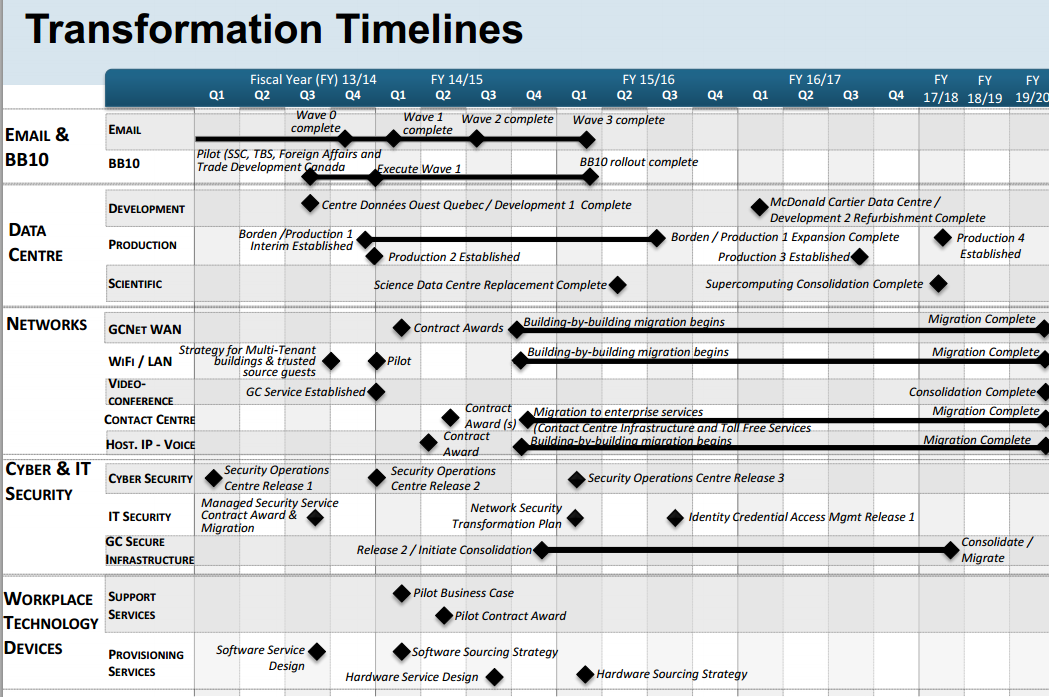 Jeff Jedras
A veteran technology and business journalist, Jeff Jedras began his career in technology journalism in the late 1990s, covering the booming (and later busting) Ottawa technology sector for Silicon Valley North and the Ottawa Business Journal, as well as everything from municipal politics to real estate. He later covered the technology scene in Vancouver before joining IT World Canada in Toronto in 2005, covering enterprise IT for ComputerWorld Canada. He would go on to cover the channel as an assistant editor with CDN. His writing has appeared in the Vancouver Sun, the Ottawa Citizen and a wide range of industry trade publications.
Previous article
VMware Canada hires former Cisco Canada channel chief
Next article
Open Data Institute creates Canadian node

Opportunities for solution providers as Canadian government eyes blockchain and looks to...