Utah-based storage vendor Fusion-io has made a bigger push into the Canadian channel through an exclusive relationship with Tech Data. The deal, finalized in February, has allowed a group of fewer than 15 solution providers to sell Fusion-io products to Canadian enterprises.

“We’re very delighted to have initiated an exclusive relationship with them in Canada,” said Greg Myers, vice-president of marketing with Tech Data Canada. “The technology is quite fascinating and compelling,” Myers said.

Fusion-io uses flash memory technology for its ioMemory server module line and allows for management of all modules from its ioSphere software platform. According to the company, “One ioMemory module contains 100 times the capacity density of dynamic random access memory, or DRAM, to provide applications fully scalable memory for accelerating throughput.” The company’s products are “far in excess of anything a consumer may get their hands on,” said Dave Pearson, a senior analyst with IDC Canada. “It’s like having a fire hose at your disposal instead of a drinking straw.”

The company filed for its initial public offering (IPO) earlier this year and increased the offering from $16 to $18 per share in June. Fusion-io remains in a quiet period until later this summer, so is unable to comment on its channel initiatives until its next financial period, according to a company representative. 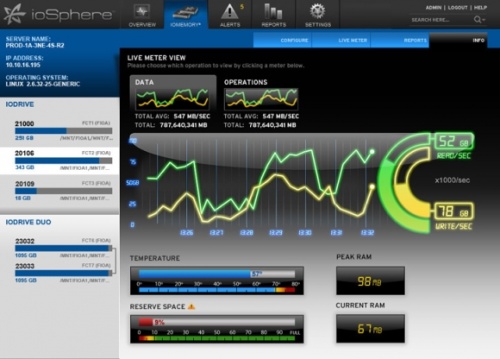 “For people that don’t need instant response on a particular query, there’s absolutely no need to use a product like this within the data centre,” Pearson said. Rather, the technology is built for large enterprises with a specific need for accessing large amounts of data quickly.

“It’s really a new category of product,” Myers said. “What I think is really cool about these guys is their commitment to do something very specific and targeted,” he added.

“I would characterize this company as being very thoughtful, very methodical in their approach. They’re very deliberate in their motion,” he said. “I think they’ve chosen partners that have a large regional or national footprint,” he added, including CDW Canada and Softchoice Canada. “They’re not particularly on a recruitment drive. They are very, very focused on creating partners with each of the partners that they’ve engaged.”

Fusion-io technology has technically been available in the Canadian channel through its partnerships with original equipment manufacturers (OEMs) such as IBM and Dell, Myers pointed out. “We’ve had some experience with that technology as a result of representing IBM and HP,” he said.

The experience with and commitment to OEM partners was also crucial for becoming a partner with Fusion-io, according to Chris Burgess, CEO of Waterloo, Ont.-based Net Direct Inc.. “They worked really hard at making us a partner,” he said.

Burgess was unable to give more details surrounding his customer base due to confidentiality agreements, but he said he serves large enterprises in the private sector, the main target market for Fusion-io products.

But now, this small group of solution providers is no longer limited in which technology it can capitalize on, according to Burgess. “We go above and beyond just being an integrator,” he said. Being one of a select group of solution providers is also beneficial, according to Burgess. “It gives us some breathing room rather than having every Tom, Dick and Harry run around,” offering solutions, he said. “I actually kind of like baby steps,” he added. “Especially with a technology like theirs, biting off more than you can chew sometimes doesn’t work out.”

Harmeet Singh
Harmeet reports on channel partner programs, new technologies and products and other issues relevant to Canada's channel community. She also contributes as a video journalist, providing content for the site's original streaming video. Harmeet is a graduate of the Carleton University School of Journalism.
Previous article
Who are all these hacker groups?
Next article
Apple loses ‘App Store’ legal action against Amazon

CDN SMB Report: Budgets are stable, but not their IT challenges

A lesson from the decline of the Amiga