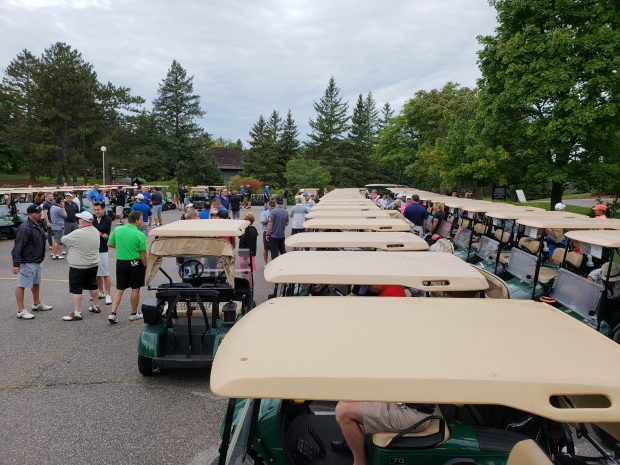 The Canadian IT channel partner community came together for the 34th time last week to reminisce about old times, slice a few golf balls into the forest, but more importantly, raise money for two incredibly important causes.

More than 300 golfers attended the 2018 Canadian Computer Charity Golf Classic, representing close to 100 leading organizations from Canada’s technology sector. For the past 34 years, the tournament has raised more than $5.7 million for Easter Seals Ontario and Princess Margaret Hospital, and on Monday, that total increased by $220,000.

What began as an opportunity for a small group of people from the IT community to network, has since blossomed into an annual event with far-reaching impacts, says Lauren Squizzato, development manager of special events for Easter Seals Ontario.

“The event has been an accumulation of efforts from distributors, vendors and resellers which makes this a true industry event,” she told CDN. “With the money raised we are able to fund more children’s equipment such as wheelchairs, van lifts and bath lifts. We are also able to send more kids to fully accessible summer camps which Easter Seals owns and operates.”

Easter Seals’ 2009 ambassador and Humber broadcast student Casey MacKay, explained why the organization is so important to children with disabilities. “Did you know, that kids who have disabilities have zero or only one close friend, and often eat lunch at school alone? Well, at camp, this never happens,” he told participants during dinner at the Country Club in Vaughan, Ont.

MacKay described Easter Seals as a true home away from home, a place where young people not only make friends, but build confidence within themselves. He thanked everyone for their time and effort in organizing another successful fundraiser. Kevin Collins, president and CEO of Easter Seals Ontario, echoed MacKay’s thoughts.

“There are so many other kids like Casey who are following their dreams because of events like this and people like yourselves,” he said. Collins also thanked the events sponsors, many of which have supported the golf tournament every year for the past decade. “Without these sponsors, the events don’t happen.”

The Canadian IT partner community is one of the most active when it comes to supporting charities, said Tracey Hutchison, director of partner sales at Cisco, the event’s host sponsor.

“The technology business has provided many of us with great opportunities, so this is a great opportunity for us to give back,” said Hutchinson, adding Cisco donated nearly $20,000 to Easter Seals last year. “When I talk to my peers and partners in the business, the majority of them have a focus charity or community they belong to.”

Jeff Volpe, president of ViewSonic Corp., agreed with Hutchinson, adding the channel partner community hosts multiple charity events every year, but none come close to this one.

“This is the one that we all attend. I would say it’s the most iconic golf tournament in North America,” he said.

The golf tournament concluded with a silent auction, a live auction, and a video tribute for Kevin Murai, president of Synnex Corp. He served as president and CEO from December 2008 until his recent retirement in March 2018. Prior to Synnex, Murai was employed for 19 years at Ingram Micro Inc., where he served in several executive management positions, including president and chief operating officer. He was also on the Ingram Micro board of directors.

“Through all of the success we’ve all had over the past few decades … events like this are always a feel-good story and it’s great to be able to give back to the community,” said Murai, adding he’s made many friends from the industry, some of whom belong to competing companies. “Don’t burn any bridges,” he laughed. “You never know what might happen, it’s a very tight-knit industry as you know.”

The golf tournament was also in memory of Darrel Ryce, who died last September. Ryce was the director of technology and entertainment at The NPD Group and a long-time supporter of the Canadian Computer Charity Golf Classic.

The journey to make a difference