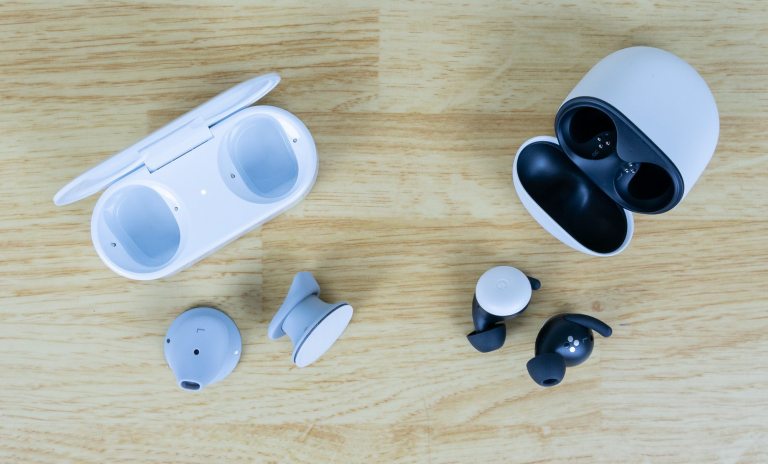 There’s a handful of premium wireless earphones to choose from besides Apple’s legendary AirPods Pro. Recently, Microsoft’s Surface Earbuds debuted with a ton of consumer interest, and now that Google has brought its new Pixel Buds to Canada, I thought it would be apt to compare two of the most interesting earphones in recent months.

The Microsoft Surface Earbuds sports a unique and–depending on who you ask–obnoxious design. Its flat saucer touchpad juts out from the ear and easily catches the eye. The touchpads are also glossy, which creates a bright glare when light hits them just right.

There’s no debate when it comes to comfort: the Surface Earbuds’ otherworldly fit beats any earphone I’ve tried. Its swappable tips wrap around the entire length of the speaker grill, not just the end. Once you find the right tip for your ear, you can easily forget that you’re still wearing them when music isn’t playing.

The smaller Pixel Buds are more discreet. With earpieces just slightly larger than wired earphones, they can be tucked into the ears. Buyers can also choose the Almost Black colour option for added stealth. With that said, keep in mind that this compactness comes at the cost of a smaller battery.

Google claims that it shaped the Pixel Buds after scanning thousands of ears. And although the earpiece’s rounded contour and wingtips are plenty comfortable, it can’t match the gentle fit of the Surface Earbuds.

Water-resistance is an important consideration with peripherals that frequent the outdoors. The Surface Earbuds are IPX4 rated and can shrug off splashing water from any direction. Google’s Pixel Buds also have an IPX4 rating to handle sweat and rain with ease.

Sound quality is tantamount to an earphone’s prestige and can be affected by a plethora of variables: fit, tuning, and driver quality are just a few. Equally important is personal taste and the genre of music; rap fans may prefer punchier bass than those who enjoy country.

Based on my experience, I must hand the win to the Google Pixel Buds. Out of the box, it sounded more balanced than the Microsoft Surface Earbuds, which heavily favours bass. Even after adjusting the equalizer in the Surface Audio app, I still wasn’t able to tune the Surface Earbuds to sing to my taste. The Pixel Buds also provided adequate noise insulation thanks to their ear tip’s seal, something I appreciated when roaming outdoors.

Despite touting “premium audio”, both earphones produce a hissing sound when they’re sitting idle. Whereas the hissing disappears from the Pixel Buds when the music starts, the Surface Earbuds’ noise persists and can sometimes disrupt gentler instrumentals. The noise doesn’t seem to plague all units, but Microsoft said it’s currently investigating nonetheless.

Features and ease of use

The Pixel Buds and the Surface Earbuds support touch inputs on the earpieces. Users can swipe and tap on the earbuds to access basic controls: skip music tracks, answer calls, adjust volume, and summon voice assistants of their respective devices. Touch controls for both were highly accurate and reliable.

There are a few slight differences when looking beyond the basics. When paired with an Android device, the Pixel Buds can dictate your notifications and provide real-time translations through the Google Translate app. While the Surface Buds can also call upon the Google Assistant to read notifications to you, it can’t use its earpiece touchpads to activate the microphone in Google Translate, nor can it alternate between the phone’s speakers and earpiece to deliver translations.

But the Surface Earbuds’ ace feature is its integration with Microsoft Office. Users can swipe through slides and control embedded video playback using the earphone’s touchpads. It can also read back emails in the Outlook app on iOS, with Android support coming soon.

The Surface Earbuds have a big downside: the lack of in-ear detection. This means that music won’t autopause when you remove the earphones.

Neither device gave me trouble during pairing. My host of devices easily picked up their Bluetooth pairing signal and connected hassle-free. Moreover, the Pixel Buds can Fast Pair with Android phones simply by opening its battery case, while the Surface Earbuds can instantly pair with Windows devices through Swift Pair. Talk about fast.

The Surface Earbuds won here by a landslide. Whereas the Pixel Buds can last up to five hours on a single charge, the Surface Earbuds can last up to eight. If you don’t diligently plug the earphones back into the battery case every time you remove them, then the Pixel Buds can croak before the end of the workday. They’re quick to recharge though; I could squeeze out about an hour of use if I leave them in the battery case for 15 minutes.

Both battery cases charge through a USB-C port, but the Pixel Buds can also be charged wirelessly on a compatible wireless stand. The Surface Earbuds don’t support wireless charging.

We’ve already hinted that these devices cost a pretty penny. The Microsoft Surface Earbuds are available for a whopping CA$259.99. The Google Pixel Buds are just slightly cheaper at CA$239.99. Nevertheless, a slight win is still a win.

And the final winner is… 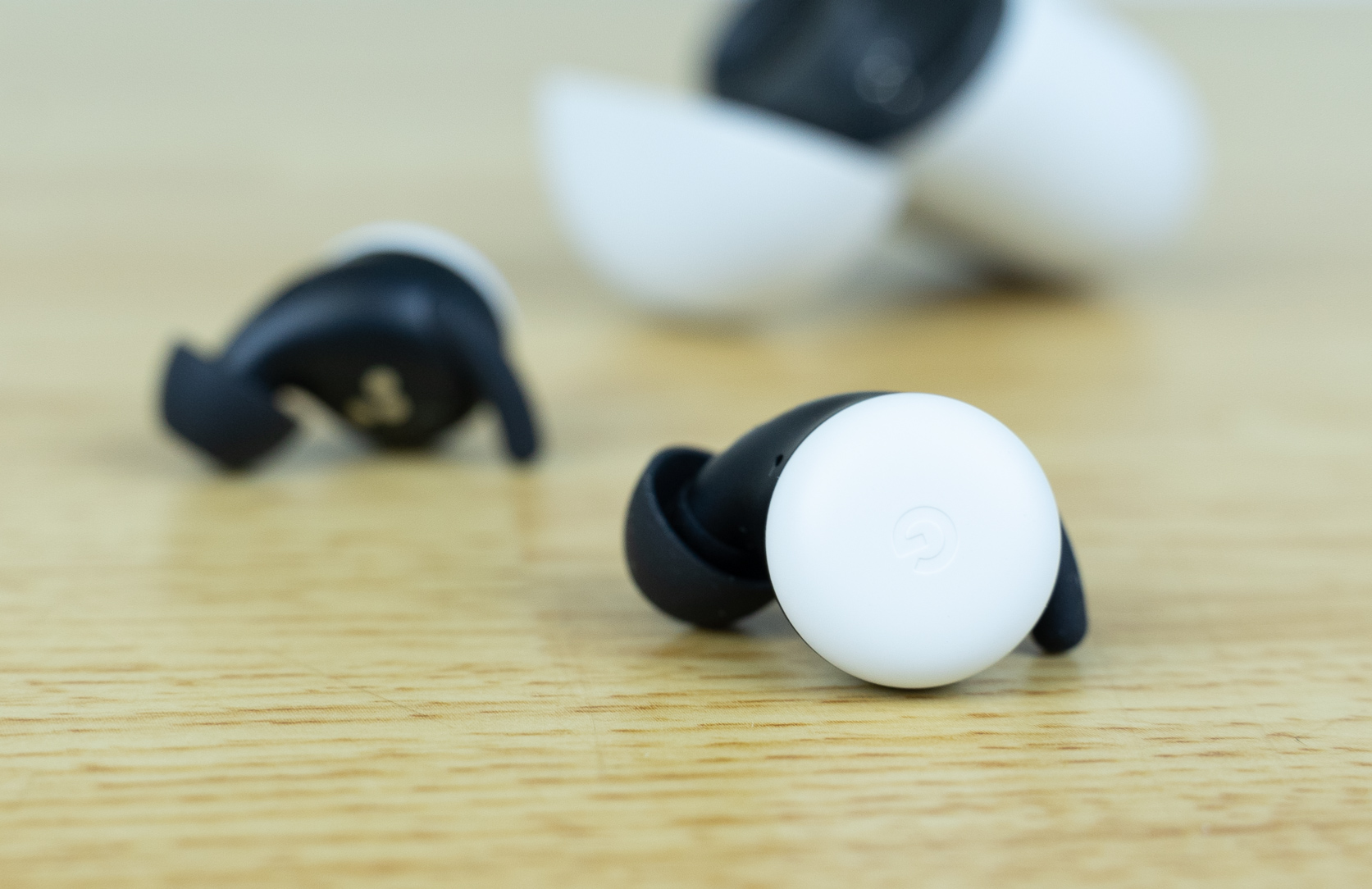 Google Pixel Buds. Choosing a winner was tough as you can’t go wrong with either device. The Microsoft Surface Earbuds had the edge in comfort, battery life, and better integration with Microsoft Office, but I preferred the Pixel Buds’ sound, inconspicuous design, and in-ear detection. It also doesn’t hurt that they’re $20 cheaper. The final factor that ousted the Surface Earbuds was its weird hissing noise. The fight would’ve been even closer had Microsoft cleared this issue before launch.

Tom Li
Telecommunication and consumer hardware are Tom's main beats at Channel Daily News. He loves to talk about Canada's network infrastructure, semiconductor products, and of course, anything hot and new in the consumer technology space. You'll also occasionally see his name appended to articles on cloud, security, and SaaS-related news. If you're ever up for a lengthy discussion about the nuances of each of the above sectors or have an upcoming product that people will love, feel free to drop him a line at tli@itwc.ca.
Previous articleZoom launches Hardware-as-a-Service, but only in the U.S.
Next articleAMD launches Ryzen Threadripper Pro 3000WX series workstation processors