By its own admission, Internet giant Google Inc. is “miles from where it wants to be” in terms of workforce diversity.

In a recent blog post this week, Laszlo Bock, senior vice-president of Google, published figures on the diversity of Google’s workforce.

The report revealed that women comprised only 30 per cent of Google’s workforce and that blacks, Hispanics and people of ethic backgrounds were under represented . The company has more than 44,000 employees around the world but the racial data covered only Google;s 26,600 workers in the United States as of August 2013

Here a snapshot of Google’s workforce: 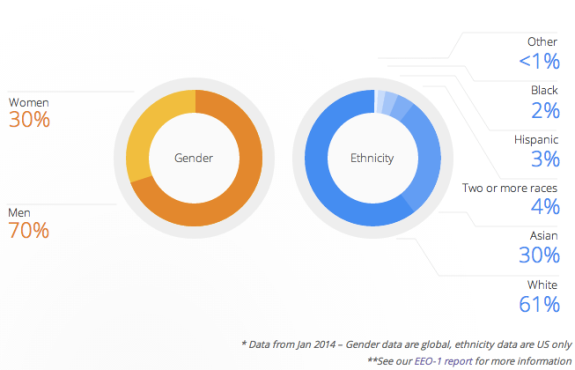 “We’ve always been reluctant to publish numbers about the diversity of our workforce at Google,” Laszlo said. “We realize we were wrong, and that it’s time to be candid about the issue. Put simply, Google is not where we want to be when it comes to diversity, and it’s hard to address these kinds of challenges if you’re not prepared to discuss them openly.”

Related Articles on CDN
Westcon bolsters diversity with new executive appointments
Microsoft Canada celebrates International Women’s Day
Dell partners with Google on workforce initiative
Cisco takes on Women in IT issues
Women in IT: What are their goals?
The unwritten rules for women in IT

He cited several reasons why technology companies like Google struggle to recruit and retain women and minorities.

Laszlo said Google has invested a lot of time and energy on education and since 2010 has donated more than $40 million to organizations “working to bring computer education to women and girls.”

The company is also working with historically black colleges and universities to improve coursework and attendance in computer science classes.

“But we’re the first to admit that Google is miles from where we want to be—and that being totally clear about the extent of the problem is a really important part of the solution,” said Laszlo.