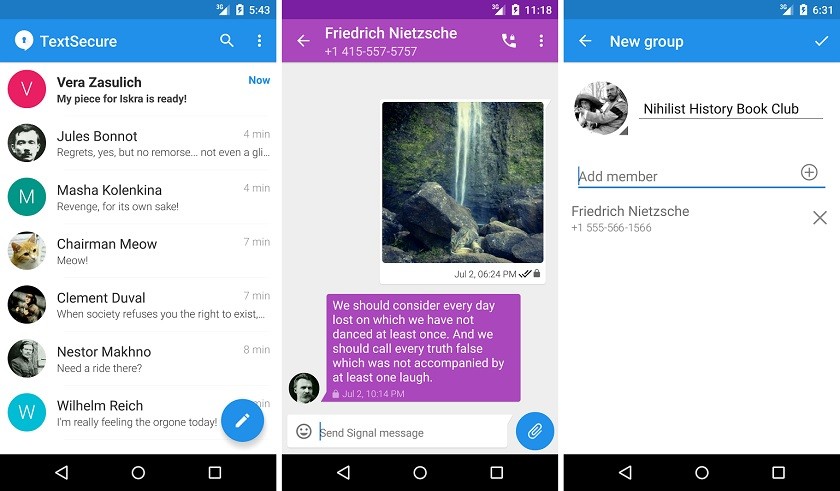 There’s a slight chance that you value privacy but may not have the $800 or so that the likes of a BlackBerry or Blackphone demand.  If that’s the case, this may be the next best thing.

Open Whisper, the makers of RedPhone and TextSecure apps for encrypted calling and SMS, has received what may be the biggest independent endorsement for a mobile app, ever.

The developer is bringing “Signal,” an app that combines the two functions into one, to Android phones, and what do you know, Edward Snowden himself is a fan.

I use Signal every day. #notesforFBI (Spoiler: they already know) https://t.co/KNy0xppsN0

Android Authority reports that the app has been available on iOS for half a year, and has garnered a reputation for staying true to its word. The two separate apps have also been available on Android, but are being combined into a new free solution.

There are two elements aside from the high-profile endorsement that vouch for the app’s authenticity.  First is that encryption takes place on the phone. According to Open Whisper, the server has no access to a user’s communications and does not store any data.

The second, and perhaps most important element, is that it’s open source and peer-reviewed. Essentially, if the app didn’t do what it advertised, someone would have blown the whistle by now.

In terms of functionality, the app asks a user to enter their phone number upon installation, and to verify through an incoming SMS code.

It uses your existing phone number and address book, and allows for group chat, attachments and VoIP all while encrypted.

In an age of apps like Facebook Messenger that tracks any and all activity in and outside of of the app, eroding any expectation of privacy, it’s refreshing to see developers finally trying to address these concerns.

Also, on a side note, does this mean Snowden is on an iPhone?