BOSTON – Solution providers attending the HP Global Partner Conference today woke to the announcement that their vendor partner made the biggest printer acquisition in history. HP Inc. spent a little over $1 billion ($1.05 billion) to acquire the printer business from Samsung Electronics.

Dion Weisler, the president and CEO of HP Inc., told the more than 13,000 channel partners at the HP Global Partner Conference that “talk is cheap” and the acquisition of the Samsung printing business will advance HP’s market presence in the A3 sector also known as the copier market.

“Samsung and the $1 billion spent to acquire the printing business advances our strategy and helps us re-invent printing,” Weisler said.

Currently HP is the worldwide market leader in printing and imaging with 40 per cent market share. And, they have been the leader for the past 30 years.

HP is betting that printing and copier markets are colliding. HP is at best a minor player today in the copier market that is currently valued at $55 billion. Weisler said HP has less than five per cent market share in this area that is dominated by vendors such as Xerox and Ricoh who sell predominately direct. “Something is wrong and we will fix that,” he said.

Weisler added HP did not have a differentiating solution in this market. Now with Samsung, HP believes they will be a market disruptor. And, Weisler said the billion-dollar investment was not just to acquire the Samsung printer business but also an investment in the partner channel.

HP expects to go to market with existing managed print services (MSP) channel partners and at least 50 per cent of the existing copier dealers in the market.

Brett Bailey, the vice-president of CDN Top 100 Solution Privider WBM of Saskatoon, said managed print services solution providers with large practice areas will see this acquisition as exciting. “Fundamentally, I think MSP’s have been following the HP split and hoping to see the impact of increased focus and development, and regardless of opinions about Samsung, this is as an example of that type of strategic investment,” he said.

Bailey sees immediate positives around the fact that HP is a print engine manufacturer, where outsourced arrangements can be a supply vulnerability, and MSPs equally share in that vulnerability.

“Another positive is seeing new investment in the A3 space, with new technologies and now the Samsung acquisition.  Many HP managed print partners have in the past built a solution set that includes additional technologies to help support workloads in the A3 space, and I would think that HP is looking to this move as a way to further grow presence in this area,” he added.

Weisler also announced a goal to increase the vendor’s overall worldwide indirect business by seven per cent. HP currently has 80 per cent of its business going through channel partners.

Enrique Lores, the president of HP printing and imaging solutions, also revealed that HP worked with Samsung clandestinely to produce a new line of Pagewide A3 MFPs that the company showcased today at the event. These new machines are built with as few as seven replaceable parts. They also enter the market with a mobile-first and cloud-first user experience. Security and device management tools will also be part of the overall launch of these new units. 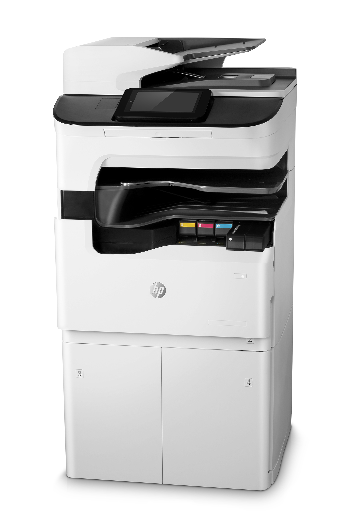 One of the latest HP Pagewide printers

“These printers will integrate with security and services tools. My mission in life is to re-invent the print business and get this business back to growth working with the channel,” Lores said.

While these new machines were launched today, the roll-out will take place mid-way through 2017.

Rob Farrell, vice president of CDN Top 100 Solution Provider SmartPrint, called the Samsung printer business acquisition a bold, smart move as the new equipment really fills in the line up so that HP has a more complete portfolio.

“I have seen the devices and understand the differentiation of the HP smarts (firmware, processing, security and ease of use etc.) with a
more complete A3 fleet. This move will enable HP to significantly expand their market share in the A3 categories, while providing an
expanded platform to enable solutions that we can layer and integrate to change the way people work,” Farrell said.

Lores added that HP is working on new printing concepts and plan to introduce new printers that are portable, more convenient for users, the home market and in the commercial graphics business.

Weisler said HP, 317 days after its separation, is now a pillar in the market place. He compared HP to other competitors such as Dell who just polished off the EMC acquisition, Lexmark, which is being acquired and Lenovo who is still trying to align its mobility business. “Competitors are distracted…while we are a pillar of strength in the industry. We can now focus on accelerating the opportunity in the marketplace.”

Bailey also said in terms of areas that managed print partners might want to understand more about, he believes there will be interest in what happens to the existing Samsung dealer channel, and how the Samsung devices, which are sometimes seen as low cost boxes from a manufacturer not focused in this space, will be integrated into an HP lineup. “That is moving toward new innovations such as Pagewide array, and is well regarded as being secure and enterprise proven.  All in all it’s exciting news and it will be interesting to see it unfold.”

HP has been reselling Sharp copiers with less than stellar results. Lores said the company learned from what they did with Sharp and admitted their solution was a non-differentiated copier. “It did not help us. These printers (announced today) will compete head-to-head with copiers with a lower cost to market. This is a differentiated strategy and the channel can be more aggressive with lower cost per page models,” Lores said.

Catherine Lesjak, the CFO of HP Inc., said the acquisition enables HP to combine Samsung innovation with its own instead of just being a reseller. “We’ll have better security, smarter analytics, and remote connection and its printer technology; not copier technology,” she said.

The deal is expected to close at the end of HP’s fiscal year in 2017. At that time, HP expects to include more than 1,300 Samsung technical engineers. The company also plans on keeping the Samsung brand for two more years after close as they want to continue working with Samsung channel partners. After that HP plans to begin transitioning those Samsung partners over to HP, Lores said.