HP’s latest batch of premium Elite and Envy devices offer little in terms of surprises, but a lot when it comes to choice.

HP’s professional audience will want to take a close look at the company’s Elite lineup, beginning with the new EliteBook 1050. The slick business notebook featuring NVIDIA GeForce GTX 1050 graphics, a first for the professional market, according to HP, gives users the option between 1080p and 4K resolutions for its 15.6-inch screen. It’s more powerful than anything in the Envy lineup, thanks to its six-core Intel processor, and supports four terabytes of SSD storage.

Gagan Singh, vice-president of product management, premium commercial notebooks and security and innovation for HP, told reporters during a conference call that the Elite lineup is targeting startups and growing businesses.

“The broad theme for us this year is reinventing success,” said Singh, while acknowledging the fact that users work in a variety of environments. “We want to help the modern workforce achieve their definition of success.” 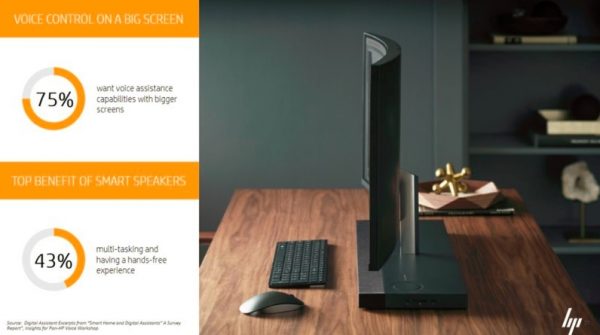 Voice assistants are a new feature that HP thinks will gain serious traction among its AiO users. Source: HP

Professionals looking for a bit more flexibility might want to consider the EliteBook x360 1030, which HP says is the world’s smallest business detachable at 2.7 pounds. The device comes with a 13.3-inch 4K screen. It also offers optional built-in LTE support, and an optional 700 nit monitor, a valuable inclusion for those who have the opportunity to work outdoors. The Elite X2 1013 isn’t shaking up the formula with its detachable 13-inch screen that can be used as a tablet when removed from the keyboard, and comes with a quad-core 8th gen Intel CPU and optional LTE.

HP’s all-in-one desktops made a splash as well during HP’s latest unveiling. The EliteOne 1000 AiO, comes with a 34-inch curved (or 23.8-inch) AiO with discrete graphics. HP says it’s meant for collaboration and video conferencing, and complements its Envy AiO 27 and brand new Envy Curved AiO 34 all-in-ones. The latter is almost completely wireless – the only necessary connection is the power cable – and gives users the ability to interact with it via Alexa.

HP’s Envy lineup is looking to maintain its reputation of delivering affordable, reliable machines, according to Pierre Antoine, the company’s director of product management and consumer desktop PCs. He was also quick to point out they’ve responded to customer feedback this year, and cited the fact that many customers wanted their laptops to produce less noise.
The straightforward Envy 13 and 17 notebooks feature 8th Generation Intel Core CPUs, NVIDIA GeForce MX150 graphics, and either 1080p or 4K screens. HP also included a webcam on both laptops while reducing the size of the top screen bezel by 31 per cent.

The new Envy x360 15 is the latest addition to the convertible lineup and features similar design upgrades. Users can choose from AMD Ryzen CPUs or Intel, Radeon Vega or GeForce MX 150 graphics, and 1080p or 4K screens. The convertible and new notebooks also feature Sure View, a new feature that blocks your screen from being viewed at an angle, a useful tool when working on confidential material in public.

Canadian pricing and availability are as follows:

· HP EliteDisplay S14, in Canada expected to be available in July for a starting price of $285