If you’ve followed our coverage of Hewlett Packard Enterprise’s announcements regarding composable infrastructure, also known as Synergy, being the successor of sorts to hyper-converged infrastructure, you may be wondering whether the latter is still relevant.

With the release this week of another hyper-converged offering, the HC 380, the answer is a resounding “yes.”

The solution itself is fairly straightforward. Unlike the HC 250 (HC stands for hyper-converged) which made use of the Microsoft Cloud Platform System (CPS) standard, and was meant for Microsoft Azure, HC 380 is more agnostic, although essentially for VMware, according to Paul Durzan, vice president, of product management of converged data center infrastructure.

It’s designed for mid-sized enterprises and remote or branch offices and prioritizes simplicity and affordability, with a two-node startup point, and it’s built on HPE’s server offering, the ProLiant DL380.

Unlike the HC 250, which is still sold and is meant for more single purpose compute-intensive uses such as at the head office, the 380 is designed for multiple workloads and general usage with fewer devices.

The 380 comes with a single-pane UX designed for simple deployment across multiple sites. It also comes with features or services such as firmware compatibility testing, VM snapshotting, and replication to any virtual or physical server and other features.

But it’s in the grand scheme of things, a.k.a. Synergy, that the 380 plays an interesting role.

With a common framework, the HC 380 is more a piece of the puzzle rather than a precursor to composable infrastructure.

“We expect hyperconverged to become part of the composable story,” Durzan said. “Over the next several years we will be rolling out composable infrastructure in phases.” 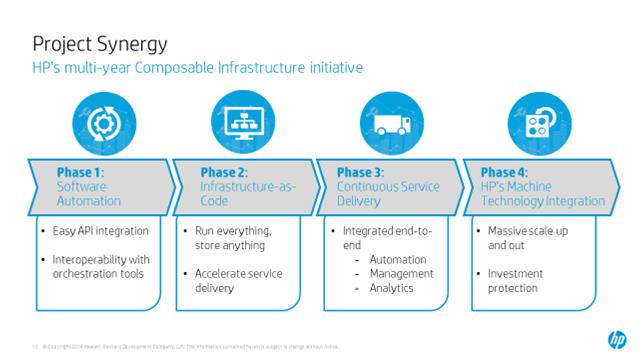 First was software automation, which was OneView, while the second was about the code, which is Synergy, he explained. Third is the platform in the form of HC solutions, while the last is about machine learning.

As for Canadian prospects, Synergy may not see quite as much an uptake here since businesses whose compute requirements may not be as intensive may not make full use of Synergy’s compute capabilities, according to John Dathan, vice president of strategy and business development at the enterprise group of HPE Canada.

Nevertheless, the company says, Canadian businesses will have the choice of switching between them.

“Hyperconverged could be a path to composable infrastructure,” Dathan said.