IBM announced Thursday a breakthrough in its tape storage technology research that improves on the company’s existing tape product storage capacity by up to 88 times.

The breakthrough, still in the R&D phase, has an areal recording density of 123 billion bits of uncompressed data per square inch on low cost, particulate magnetic tape, and features a cartridge capacity of 220 Terabytes.

This is 88 times the capacity of the industry’s previous Linear Tape-Open standard (LTO-6), released in 2012, which held 2.5 TB and was marketed as a mid-range product.  Meanwhile, IBM’s enterprise-grade tape storage solutions would see an improvement of 22 times with the new capacity. 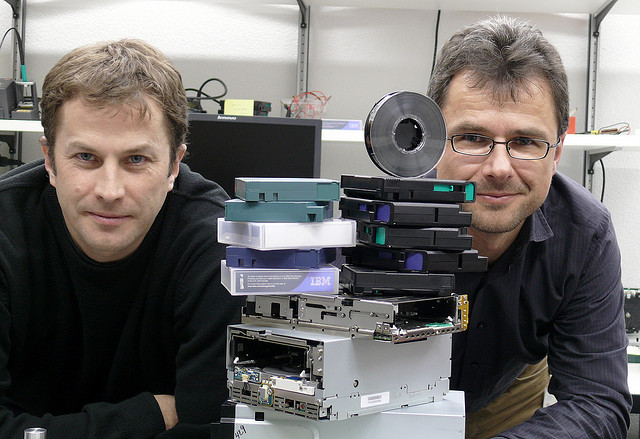 IBM scientists Mark Lantz and Jens Jelitto next to a stack of various IBM LTO and Enterprise Tape media.

“Tape is actually growing,” said Mark Lantz, manager of exploratory tape at IBM Research in Zurich, Switzerland.  He explained that, while in consumer and SMB markets tape has declined in recent years due to HDD prices coming down, the growing demand for archival technologies is bringing back a “resurgence” in tape.

Another factor is the slowing growth of HDD capacity, which has had difficulty keeping up with Moore’s law.  Aside from delays due to industry standardization, Lantz says that tape has largely kept up with the scale of data.

The technology was developed by IBM in partnership with Fujifilm.  The former developed the hardware while the latter the media, in a CD player-CD scenario. 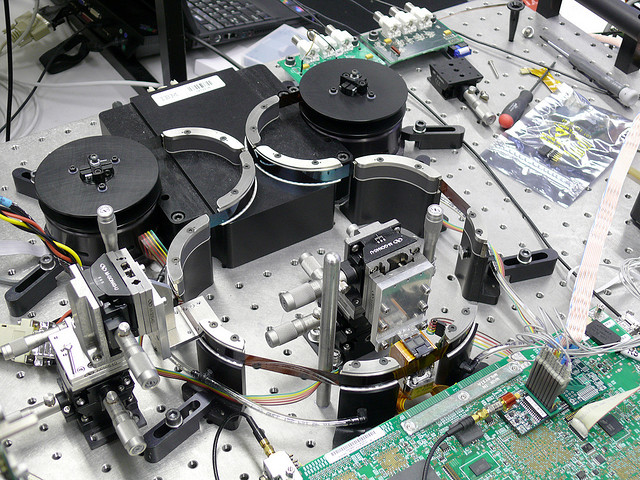 The read-write machine which, according to IBM scientists, can record a record magnetic tape data density of 123 billion bits per square inch

While IBM was not ready to make any product announcements, it said that it is looking into bringing tape into cloud storage solutions.

According to Lantz, there are few companies that offer cloud solutions on tape technology – aside from maybe Google – and even fewer that specifically market the advantages of a tape-based offering, namely that it costs 2 to 3 cents per gigabyte.

He added that the disadvantage of requiring tens of seconds up to a minute to access files remains with existing iterations of tape, which is why the medium is still best suited to cold data, but nevertheless, about 80 per cent of enterprise data could reside on tape.

“In terms of cloud on tape, we’ve made a lot of progress and we’re working on technology in research that would enable that,” said Lantz. “We are now gauging interest in that offering.

BlackBerry to make tablets again; with some help from Samsung/IBM