LAS VEGAS – Monday was a flash-filled day at the IBM Edge conference, as one after another Big Blue executives made the case for flash-based storage and that a tipping point has arrived. And it’s one IBM Corp. (NYSE: IBM) is poised to exploit with $1 billion in related research and development investment.

There were a number of new product announcements on day one of the conference, but prominent among them was the roll out of the IBM FlashSystem family of all-flash storage appliances. It’s part of what IBM sees as a new emerging data centre architecture that’s able to handle the demands modern IT is facing around unstructured data and continual demands for performance improvement.

“Today’s data centres were not designed or built for this world,” said Stephen Leonard, general manager for global markets of IBM’s systems and technology group, noting a shift from making more productive use of structured data from predictable back-office processes to a world that’s unpredictable and unstructured fueling ever increasing data centre complexity.

IBM’s answer is “smarter computing,” a different type of computing model based on three key principles: designed for data, built on a software-defined environment, and open and collaborative with other vendors. And flash is a key part of the vision.

“We believe flash storage is now reaching a tipping point were for most or all of your storage requirements, flash is a viable and affordable alternative to spinning disk,” said Leonard.

The economics around flash have changed concurred Ambuj Goyal, general manager of IBM’s system storage and networking group. When people shift from thinking about dollar per gigabyte to dollar per workload, the economics change dramatically, he said. Flash allows for much more capacity in a smaller footprint, leading to a host of savings. It also enables performance improvements, both on the workloads shifted to flash and those remaining on the less strained legacy infrastructure.

“It’s not just flash chips; it’s behind a software layer that does management so it slides into your data centre without changing procedures,” said Goyal.

And IBM needs partners to bring this new model to market, Goyal added, saying IBM has a channel-first strategy in this space. 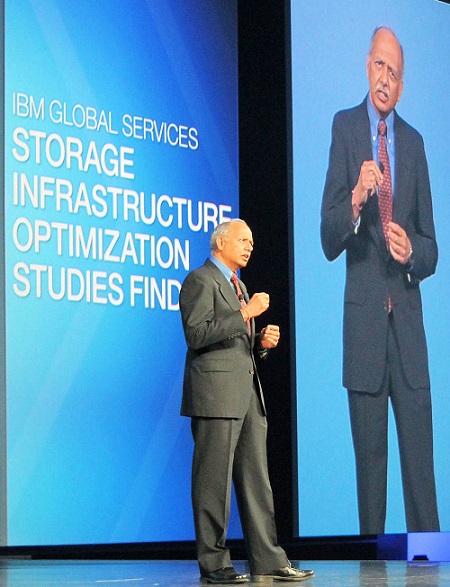 While there’s been much talk of flash at Edge, IBM said it remains committed to tape and spinning disk storage as well. A number of other storage announcements were made at the conference, including higher capacity Storewize and XIV systems, improvements to its automated tiering technology, and IBM Linear Tape File System Enterprise Edition which allows businesses to use tape storage as is own storage tier.

IBM will continue to invest in the breadth of its portfolio said Sebastian Krause, vice-president of global storage sales for IBM’s systems and technology group.

“It’s a huge advantage for us to have this huge portfolio that is the broadest in the industry, and it helps us to provide solutions to our clients,” said Krause.

IBM’s storage strategy has four legs, said Krause. The first leg is the business critical segment of customers, where storage downtime has a pricy economic impact. The second is customers that want to deploy storage quickly with an immediate return on investment. The third is data intensive solutions such as data protection and archiving. And the fourth, newly a leg is its own, is flash. Krause said IBM is investing in solutions to meet each of these client use cases.

In addition to encouraging existing partners to add flash solutions to their portfolio, IBM is recruiting new partners, and is seeing interest from new types of partners. For example, software-focused partners that provision Oracle IBM DB2 databases for their clients, and have customers demanding improved performance and faster transaction speeds.

“Flash becomes a really neat way to support that infrastructure,” said Krause. “In our partner base, we’re seeing a lot of partners trying to focus on a combination of database, storage and flash skills.”

IBM is also arming partners with analyst evaluations and TCO tools to help partners overcome their client’s initial reactions that flash must be a pricier alternative. Krause said by using information provided by the prospect on their data use, IBM can calculate the cost savings and performance gains they could realize by moving to a flash or hybrid environment.s