IT struggling with virtualization security: Kaspersky

Virtual infrastructures continue to grow in importance for enterprises worldwide and securing virtual environments is top of mind for the majority of IT departments, but a recent survey has revealed that as many as one out of four IT professionals “have little or no understanding” of their virtualization security options.

These findings “highlight a clear disconnect” between how organizations perceive security for virtual environments and the tools available to handle the job, according to Mark Bermingham, virtualization evangelist for Kaspersky Lab.

“Businesses today face an ever-evolving threat landscape and cybercriminals are increasingly looking at virtual environments as the next frontier of sophisticated attacks,” he said. “With many businesses turning their attention to securing virtual environments, it is critical that they execute these initiatives and understand their options for securing these business-critical environments.”

The use of virtual environments to support core business applications and operations is not showing any signs of slowing down. For example even for the lowest rate of planned virtualization growth (financial and account applications), respondents projected an increase by 48 per cent in the next 12 months.

Fifty two per cent of respondents agreed that virtualization environments are increasingly forming a core part of their business IT infrastructure.

The diagram below shows what key functions companies are implementing on physical and on virtual infrastructures: 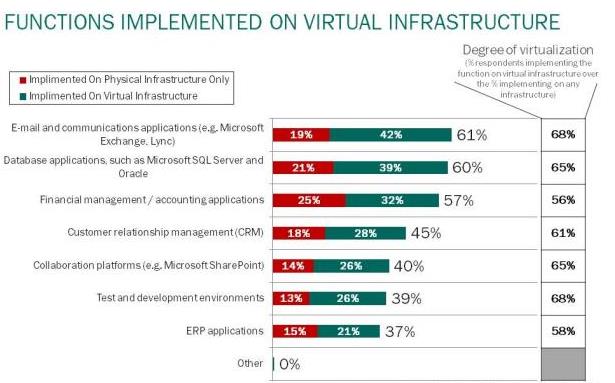 Other key findings were:

IT administrators should pay special attention to network traffic and performance losses in larger virtual deployments and determine if physical security may be negating the return of investment (ROI) from the company’s virtual infrastructure, according to Kaspersky.

Nestor Arellano
Toronto-based journalist specializing in technology and business news. Blogs and tweets on the latest tech trends and gadgets.
Previous articleeBay is $2B market for Apple
Next articleHP bets $50 M on Hortonwork’s Hadoop