Kaspersky Internet Security 2012 ($80 for one year and three PCs as of January 25, 2012) ranked fourth in our 2012 roundup of security suites. Although it finished outside the top three, it’s a solid all-around suite that will do an effective job at keeping you safe.

In our real-world malware blocking tests, Kaspersky’s suite fully blocked all samples that it encountered. This result means that it should do very well in protecting you from brand-new, as-yet unknown malware. In addition, it detected 99.34 percent of known malware samples in more-traditional signature-based detection tests.

On its own, that’s a great showing–but believe it or not, that’s merely an average result this year due to the overall strength of 2012’s suites.
False positives are largely a nonissue: Kaspersky’s product misidentified only one safe file out of a pool of 250,000 files as dangerous. And the suite was effective at disinfection, detecting and disabling all sample infections on our test PC. It removed all traces of malware 60 percent of the time, performing slightly above average in that regard.

In general the Kaspersky suite has a low impact on PC performance, though it did slow our test machine a fair amount when we copied files over a network: It took 3 minutes, 34 seconds to complete this test, landing well behind the average of 3 minutes, 2 seconds. 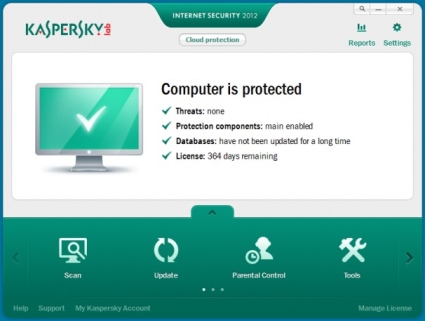 It was faster than average, however, at scanning. It completed an on-demand scan (which runs when you manually click the ‘Scan Now’ button) of 4.5GB of data in 1 minute, 11 seconds–the third-best showing, and a considerably better result than the average of 1 minute, 59 seconds for the suites we looked at. It wrapped up on-access scanning (which kicks off when you open or save a file) of 4.5GB of data in 4 minutes, 40 seconds, about 8 seconds faster than average.

On the rest of our speed tests, Kaspersky finished either around average or above average as compared with its competition.

Kaspersky gave its software a face-lift in 2012, abandoning the curiously divided interface in last year’s suite. While the new interface is fine, it isn’t outstanding. Kaspersky uses a fairly standard multistep wizard installer that’s fairly painless, but some of the other suites we looked at this year have one-click installation processes.

Once the package was installed, we navigated its screens fairly easily. The main screen gives a clear indicator of your protection status, with buttons along the bottom to adjust settings for the suite’s major components. Some parts still could use a redesign, though. For example, a few panels open in the main window, while others spawn new windows, which can be a little disorienting. And from a purely aesthetic perspective, I wasn’t a huge fan of the teal-and-white theme–but that’s picking nits.

Kaspersky Internet Security 2012 falls a little short of the absolute top competitors, mainly because of the all-around strength of this year’s suites. Nevertheless, Kaspersky’s latest offering is worth a look.