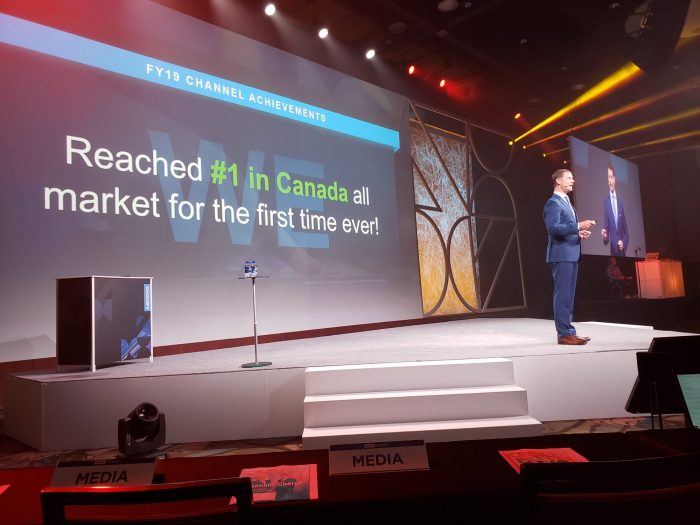 ORLANDO — There was a surprising amount of excitement in the theatre hall when Lenovo’s Matthew Zielinski highlighted Lenovo’s number one ranking in the Canadian PC market, a spot that had been dominated by HP Inc. for more than a decade.

“This one, we’re really proud of,” said Lenovo’s latest North America chief for its Intelligent Devices Group (IDG) – the sixth one in six years, to be exact. The slide behind him read “FY19 Channel Achievements – Reached #1 in Canada all market for the first time ever!” The crowd burst into a round of applause, and the positive vibes continued as Zielinksi and other executives touted Lenovo’s other recent wins in the market.

But it wasn’t that long ago when Zielinksi stood on stage at Accelerate, promising the same audience massive changes to how Lenovo was going to work with partners amidst slumping partner sales.

Zielinski, a former AMD executive who was appointed to his role February 2018, credited much of Lenovo’s recent success to channel partners who also helped Lenovo become the number one global PC company in 2018 with 22.5 per cent market share. An impressive feat, even considering the joint venture Lenovo formed with Fujitsu May 2018. IDG revenue increased 12 per cent year-over-year to $10.7 billion in the third quarter of 2018, while Lenovo’s Data Center Group (DCG) revenue increased 31 per cent year-over-year to $1.6 billion.

But on Tuesday, he didn’t shy away from pointing out Lenovo’s missteps late 2017, when the company’s IDG decided to change the way partners were compensated, a response largely due to shrinking inventory. Partners across the board, regardless of tier level, were being compensated essentially the same. Partners struggled to see the value in committing to Lenovo, and they let the manufacturer know. On Tuesday Zielinski also acknowledged the lack of stability in the North American leadership for Lenovo.

“We lost our rudder with the channel…I spent a lot of time last year apologizing to customers,” he said. He wasn’t alone. Several IDG salespeople and channel managers spent most of last year apologizing to customers and partners and gathering feedback. Many of them, added Zielinski, sacrificed time with family and friends to be on the road, weeks-on-end.

“Everything was on the table,” said Jeff Taylor, executive director of IDG’s North American channel strategy and operations. “The nice thing about it was we reacted very quickly, and became healthy very quickly.”

“I think we’ve got our swagger back,” he said.

That swagger extended to Lenovo’s DCG. In February, Lenovo introduced Truescale Infrastructure Services, which makes use of metering tools to determine monthly how much to charge customers that sign up for a Lenovo subscription, explained Ben Martin, executive director, and general manager of professional services and XaaS for Lenovo DCG.

“There’s been an enormous amount of interest from partners up front,” he told CDN.

IDG and DCG attacking the market together

Some of Lenovo’s recent success can be attributed to its refreshed DCG and IDG portfolio, but executives were adamant the merging of DCG and IDG solutions, in a world that’s becoming increasingly connected and requiring data to be processed on edge devices, is the real winning formula.

Colin McIsaac, executive director and general manager at Lenovo Canada, indicated that several Canadian partners are beginning to understand the importance of selling from both DCG and IDG portfolios while wrapping their own services around those products. It’s not an easy shift to make, he admitted, especially when one factors in customers’ increasing preference to consume technology through subscription models.

“It’s fraught with challenges and opportunity,” he said. “This is where customers are going, and what they’re asking for. We can’t get out of that customer dialogue.”

During his keynote, Zielinski concurred.

“We’ve done a good job selling hardware and devices, but we’re realizing we have to sell nothing but solutions moving forward.”

Lenovo wants the channel to sell bundled packages that include servers, storage, networking PCs and tablets. These bundles will not only prepare the world for the projected 25 billion connected devices by 2021, but also the rise of 5G.

For partners still on the fence, Stefan Bockhop, Lenovo DCG’s North American channel chief, had this to say.

“Lenovo is a very good calorie bet. If you look at our portfolio and how we go to market, we’re not just one thing. We have a ton of different partnerships, a ton of different opportunities to go after the market. And we’re very much aimed at the growth parts of the market, those technologies that matter to CIOs…that’s the benefit that we bring to the market.”

*Alex Coop’s travel and accommodations to cover Lenovo Accelerate were paid for by Lenovo. This story was not reviewed externally before publication.

Give tax break so small Canadian firms can invest in cybersecurity, Parliament...