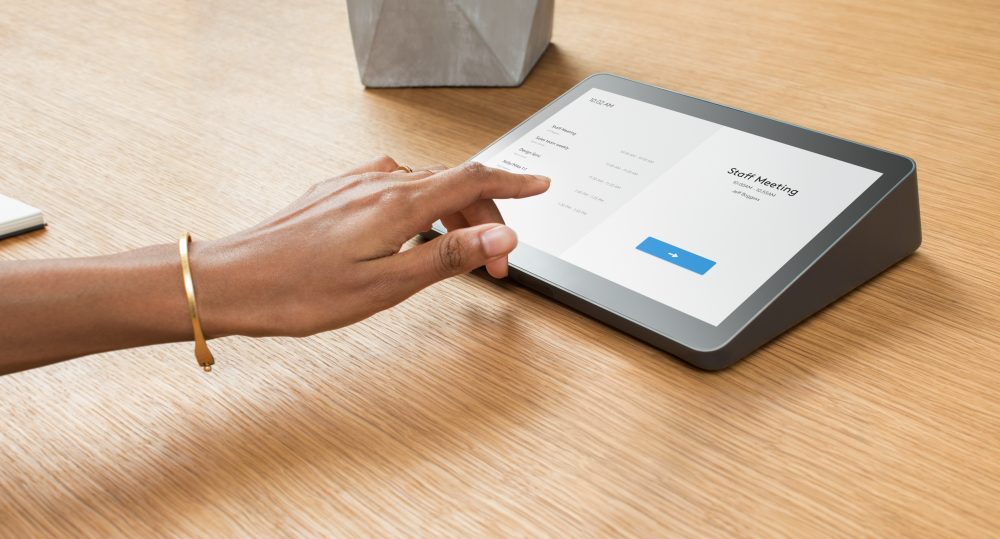 Logitech Tap is the company’s refined approach to collaboration tools and takes up less space, is built on open standards, and will be available in the Spring. The design team was laser-focused on making the Tap as platform-friendly as possible, said Joan Vandermate, head of marketing for Logitech Tap, and the device comes with pre-configured room solutions for major collaboration platform providers such as Microsoft Teams Rooms (formerly Skype Room Systems) Google Hangouts Meet Hardware and Zoom Rooms. Feedback to the Logitech SmartDock, launched in 2016, she added, suggested people had issues with the bulkiness of the device and the fact that it was tied to a single conference software system. The SmartDock used a Microsoft Surface Pro to control Skype Room Systems conferencing.

“Customers have told us that it’s fine that Microsoft decided to use Surface Pro as the compute, but our compute standard is HP, Dell or Lenovo, or even Chromebox,” explained Vandermate. “They don’t want to be forced to qualify another compute standard just for meeting rooms and to have a separate process or policy for the patches and updates. It’s in our DNA to work with every platform. We will continue to sell the SmartDock, but we think this new solution is going to be much better.”

Logitech also received a lot of feedback about how cabling need to be longer, said Vandermate, so the company is offering a 25m Strong USB cable for $499 (or a 10m option for $249). Vandermate indicated that the Tap can be picked up by the cables and given a good shake with no negative effects. The table-top – or wall-mounted – device has a single connector and a power cable, so other A/V components like cameras and microphones have to connect to the controlling computer

The standalone touch control display solution will cost $999 USD, but anyone looking for a more complete bundle that includes the computer will have to fork over $1,999. One can also purchase Rally Plus, a large room bundle which includes a hi-res camera, two mic units and two speaker bars for $4,999. The Tap will be available through its launch vendor partners and from Logitech distributors and resellers when it launches.

Microsoft Canada’s new head office: how it was optimized for hybrid work