The new portfolio, McAfee Mvision, is a new brand that addresses “historic technology limitations of complex digital terrains,” McAfee said in a statement Tuesday. In addition to McAfee Mvision Endpoint and McAfee Mvision Mobile, which offer enhanced defenses for Windows Defender and iOS and Android devices, respectively, the company says the new Mvision portfolio includes McAfee ePolicy Orchestrator (ePO), a cloud-based software-as-a-service solution that’s also available on AWS. The join-announcement was made at the AWS Summit in New York.

Raja Patel, the vice-president and general manager, described ePO on AWS as a “game-changer.” 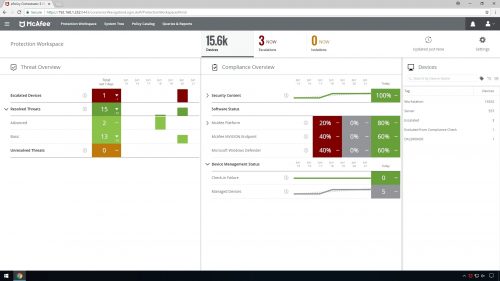 “With such a simple and fast deployment, we are removing barriers for customers to take advantage of our proven and distinct security management platform from anywhere,” he said in a statement Tuesday. “[ePO] is the most open and integrated security management console available and by keeping it in step with our customers’ cloud transformation, it ensures their security technologies will continue to work together to achieve a stronger security posture.”

The service on AWS comes with additional new features such as:

The ePO product has been part of McAfee’s portfolio for more than a decade, predating the Intel acquisition in 2010. McAfee became a jointly-owned independent company April 2017. Intel owns a 49 per cent stake, while asset management firm TPG owns 51 per cent. McAfee ePO is available now on the AWS marketplace. McAfee Mvision will be released in August this year. It will be sold as one product with three components on a subscription basis.