Micron’s uMCP5 with LPDDR5 is ready for mass production

The uMCP form factor combines universal flash storage (UFS) storage and DRAM onto a single package. It’s typically used for low to mid-range smartphones. By stacking DRAM and NAND onto a single package, uMCP alleviates some board design complexities from OEMs. Stacking the two components also saves some space for other hardware or reduces device size.

Micron’s uMCP5 is built on its uMCP4 framework. The big upgrade is the integrated memory type. Micron said in a recent press release that a new ball-grid array interface supports dual-channel LPDDR5 with bandwidth of up to 6,400Mbps, 50 per cent faster than the previous generation. Moreover, LPDDR5 is 20 per cent more power efficient than LPDDR4. 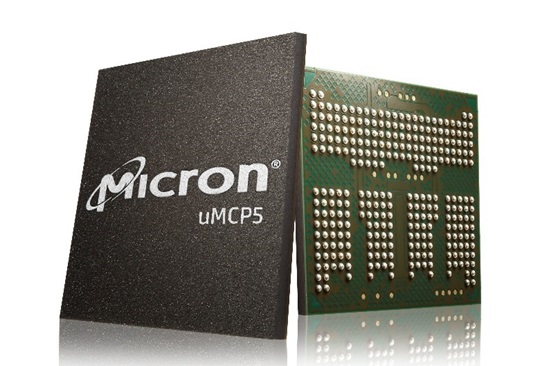 The flash memory will last longer too; Micron has boosted the NAND’s endurance to 5,000 program/erase cycles, an increase of 66 per cent. All NAND flash memory has a set number of write and erase cycles, and having more means it can store/delete more data before its performance degrades.

Raj Talluri, senior vice-president at Micron, said the increase in storage bandwidth is the answer to future 5G applications.

Currently, a large portion of the smartphone storage market is comprised of eMCP, or embedded multi-chip package. Its design is similar to uMCP in that it also stacks DRAM on top of storage but uses the cheaper, slower eMMC standard (at least when it comes to larger chunks of data). A big drawback compared to uMCP’s UFS is that eMMC can only write or read at any given time, whereas UFS can do both at the same time.