Microsoft Corp. is bringing its fifth retail store in Canada to Calgary Aug. 14, and another location in the Greater Toronto Area is expected to follow soon.

Today, Microsoft Canada has full retail stores in Toronto, Burnaby, BC, Edmonton and Mississauga, Ont. There are also mall kiosks in Edmonton, Vancouver and Toronto.

The Calgary location opens Thursday at the Chinook Centre and, according to Microsoft’s web site, it will be opening a location soon at Toronto’s Eaton’s Centre to complement its location at Toronto’s Yorkdale Mall.

The Microsoft store in Calgary is located on the North end of the Main Leve of the Chinook Centrel, next to Nordstrom’s. Microsoft will hold the grand opening ceremonies Thursday at 10:30am, and officially open the doors at 11:00am. Free tickets will be distributed for a celebratory concert featuring the band Perry, known for their country hit If I Die Young.

No opening date (or band) has been announced for the second Toronto location, but the store will be located on Level 1, across from Express. 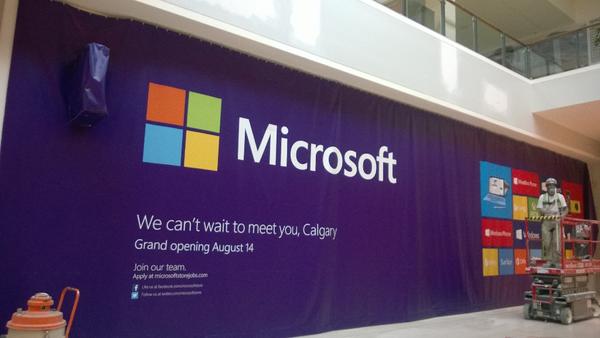 Jeff Jedras
A veteran technology and business journalist, Jeff Jedras began his career in technology journalism in the late 1990s, covering the booming (and later busting) Ottawa technology sector for Silicon Valley North and the Ottawa Business Journal, as well as everything from municipal politics to real estate. He later covered the technology scene in Vancouver before joining IT World Canada in Toronto in 2005, covering enterprise IT for ComputerWorld Canada. He would go on to cover the channel as an assistant editor with CDN. His writing has appeared in the Vancouver Sun, the Ottawa Citizen and a wide range of industry trade publications.
Previous articleNew Dell workstations double memory over previous generation
Next articleBlackBerry, Windows Phone struggle in an Android & iOS world