When it comes to personal computer market share, the dominance of Microsoft’s Windows operating system (OS) is legendary and unquestioned. There are signs, though, that it’s beginning to feel some Chromebook pressure.

Low-cost laptops running Google’s Chrome OS have been making inroads lately, particularly in the education market where, without having to buy an expensive Windows license and with its integrated management tools, the Chromebook is a good fit for budget-conscious school boards. According to IDC research, a Chromebook costs the K-12 market 69 per cent less labour to deploy and 92 per cent less labour to support than traditional PCs, with significantly lower total cost of ownership.

In what could be seen as a somewhat defensive move by the software giant, Microsoft recently targeted Chromebooks with an e-blast to retail customers, touting an Asus laptop running Windows 8.1 as a more feature-rich option than the Chromebook. 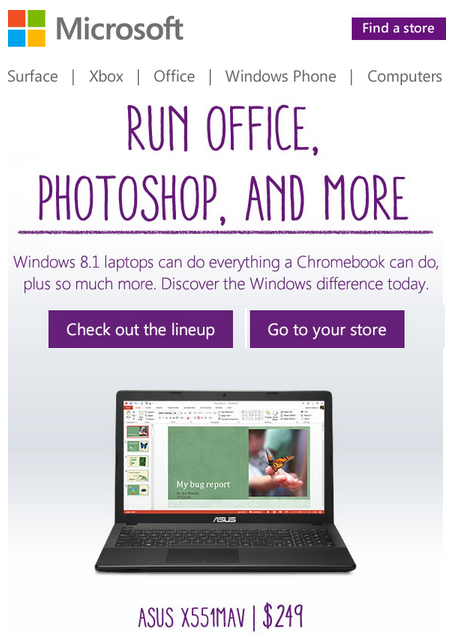 While he’s surprised Microsoft would make such a pitch to retail customers, he can understand why they would said Tim Brunt, program manager for personal computing with IDC Canada. In the first quarter, year over year growth for Chromebook shipments was 1130 per cent – albeit, at still relatively modest unit volumes. Chromebooks are expected to account for eight per cent of mobile shipments by the first quarter of 2015.

According to IDC numbers, 95 per cent of school boards in Alberta are investigating or implementing Chromebooks and, by 2020, IDC estimates some 840,000 Chromebooks will ship to the junior kindergarten through grade three space across Canada by 2020.

“It’s not huge yet, but the opportunity is certainly there for a Chromebook,” said Brunt. “Predominately right now it’s in education and consumer, but a big surprise is that it’s breaking into larger commercial enterprises very quickly.”

Brunt said he’s heard that at least one Canadian bank has halted a roll-out of iPads to evaluate going with Chromebooks as an alternative. The same central management tools that appeal to school board administrators are also catching the eyes of corporate IT managers, he said. So tablet market share may be more at risk than PCs.

So the Chromebook threat may be as much or more to tablets than to laptops. And it’s something Microsoft may be preparing to address with a rumoured new product, said Brunt.

“I’ve heard “cloud book” terminology referred to by a number of people over the last few months, which gives me the idea that Microsoft might have something they’re playing with,” said Brunt.

Jeff Jedras
A veteran technology and business journalist, Jeff Jedras began his career in technology journalism in the late 1990s, covering the booming (and later busting) Ottawa technology sector for Silicon Valley North and the Ottawa Business Journal, as well as everything from municipal politics to real estate. He later covered the technology scene in Vancouver before joining IT World Canada in Toronto in 2005, covering enterprise IT for ComputerWorld Canada. He would go on to cover the channel as an assistant editor with CDN. His writing has appeared in the Vancouver Sun, the Ottawa Citizen and a wide range of industry trade publications.
Previous article
Microsoft launches $25 Nokia; Huawei slashes budget phones
Next article
New displays effectively eliminate backlight flickering