Adoption of Office 365 in the enterprise has been growing encouragingly for Microsoft Corp. In the channel space, this is a development that can be seen in the increasing number of integrators and service providers offering their customers Office 365 migration services as well as other business solutions geared towards maximizing the features of Microsoft’s subscription-based online office suite.

Potential and current customers, however, have been asking Redmond for a road map of future Office 365 upgrades.

This week, Microsoft delivered on its earlier promise to do so. The company published a rough road map of Office 365 editions. The document, however, only covers versions of the suite for businesses and educational institutions. The available road map does not include Office 365 Home, Office 365 Personal or Office 365 Government.

“The Office 365 for business public roadmap provides you with a way to learn more about upcoming updates before the change comes to your service,” wrote Jake Zborowski, a group manager for Office 365, in his blog on Thursday. “It provides a few months’ view of new features, enhancements, and major updates.” 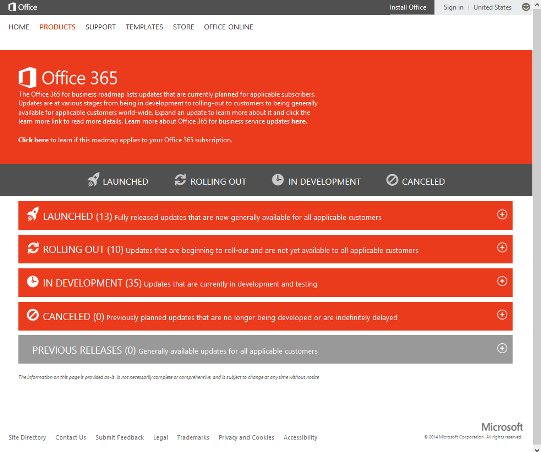 He said, Microsoft may communicate “further in advance than a few months.”

In line with the road map, Microsoft is also rolling out a new program called First Release. The program gives customers who opt-in to the program, opportunity to get a small selection of significant enhancement to Office 365, SharePoint Online and Exchange Online ahead of other users.

“If you opt-in to First Release, you will receive new qualifying feature updates first, a minimum of two weeks before customers in our standard release group,” according to Zborowski.

Updates to Lync Online, Exchange Online Protection, Office 365 ProPlus, or other related services are not included in the First Release program at this time.

By default, all Office 365 customers are part of the standard release group. “If you’re in this group, you will receive the new feature updates a minimum of two weeks after availability in First Release,” he said. The majority of service updates will be made available to all customers via Microsoft’s standard release processes.

On Tuesday, June 24th the Office 365 Technical Network will host a Roadmap Communications YamJam from 9:00-10:00am PT to discuss the announcement. This provides the opportunity for the community to ask questions and have a discussion with a panel of internal Microsoft experts on a particular topic.

YamJam is similar to a “TweetJam” on Twitter or an “Ask Me Anything (AMA)” on Reddit, except it takes place on Yammer.