In today’s data-driven world, the demand for high-performance computing in portable form factors has never been higher. The MSI WS75, a significant derivative from the company’s renowned gaming laptops, targets professionals by putting workstation-grade hardware in a gaming laptop chassis.

The design choice makes sense. Borrowing a chapter from its gaming laptops guarantees cooling capacity. As long as the hardware stays with the targeted thermal envelope, swapping out gaming hardware for workstation ones isn’t an issue. 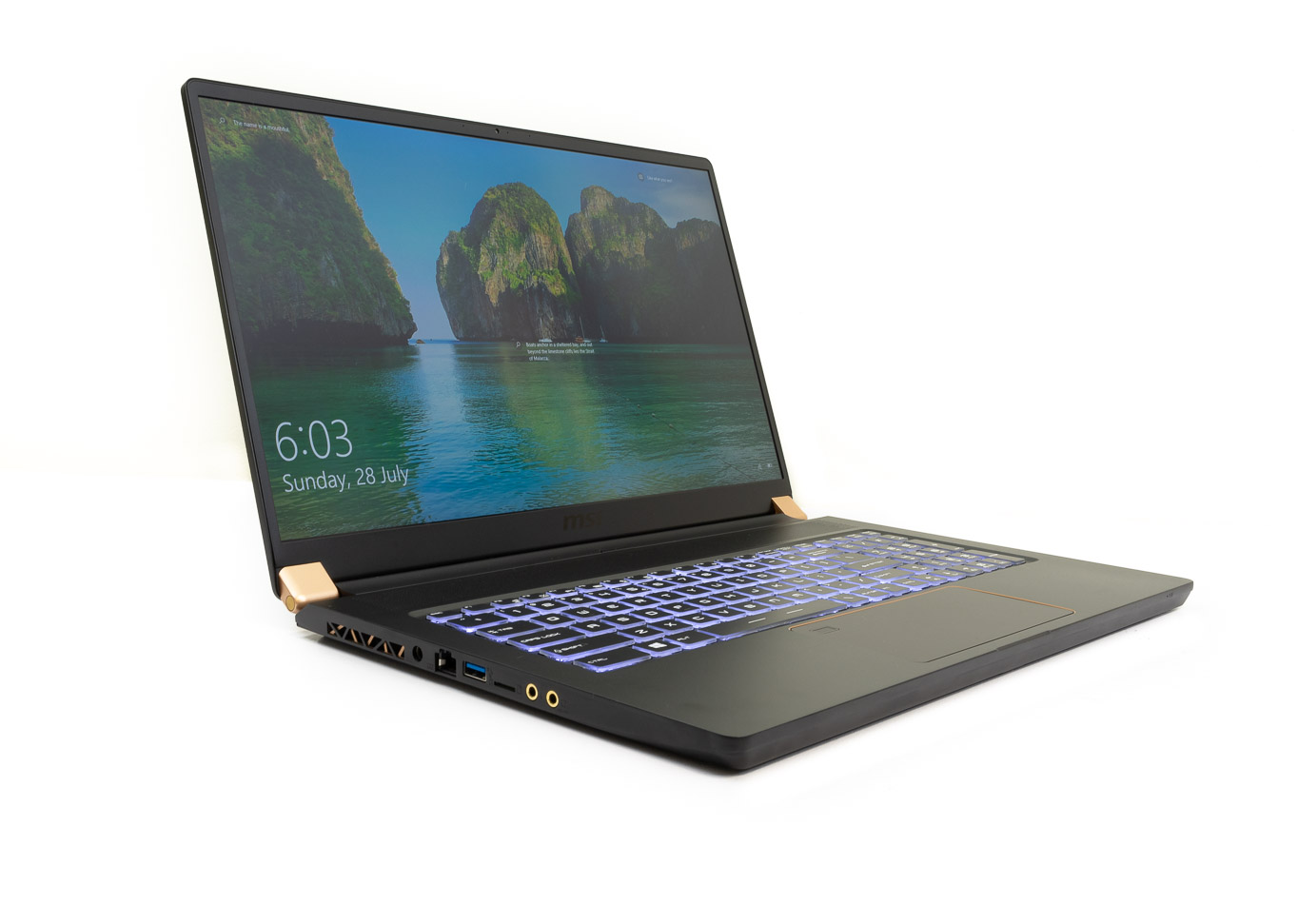 To emphasize its durability, MSI put the WS75 through a range of MIL-STD-810G tests as a testament to its rigidity. Furthermore, it has worked with major professional software companies to ensure that their software is optimized for its hardware configurations.

If the sight of the WS75 evokes a sense of Deja Vu, that’s because it borrows its design directly from the GS75 gaming laptop. And despite being coated in a matte black finish from head to toe, the WS75 still attracts a ton of fingerprints. 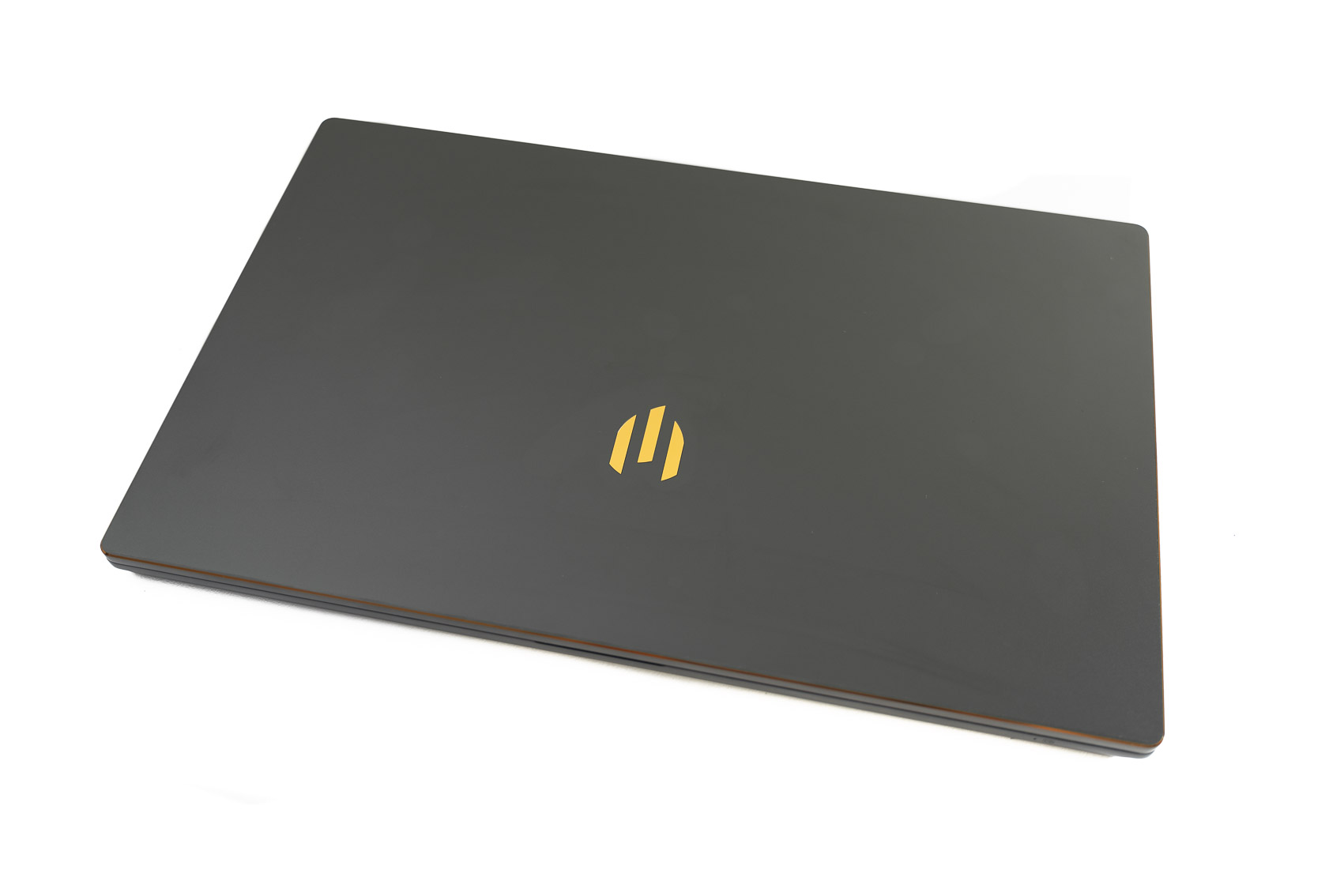 For a laptop with such powerful hardware, the WS75 is extremely thin. And at 5lbs, it’s not excessively heavy, either. 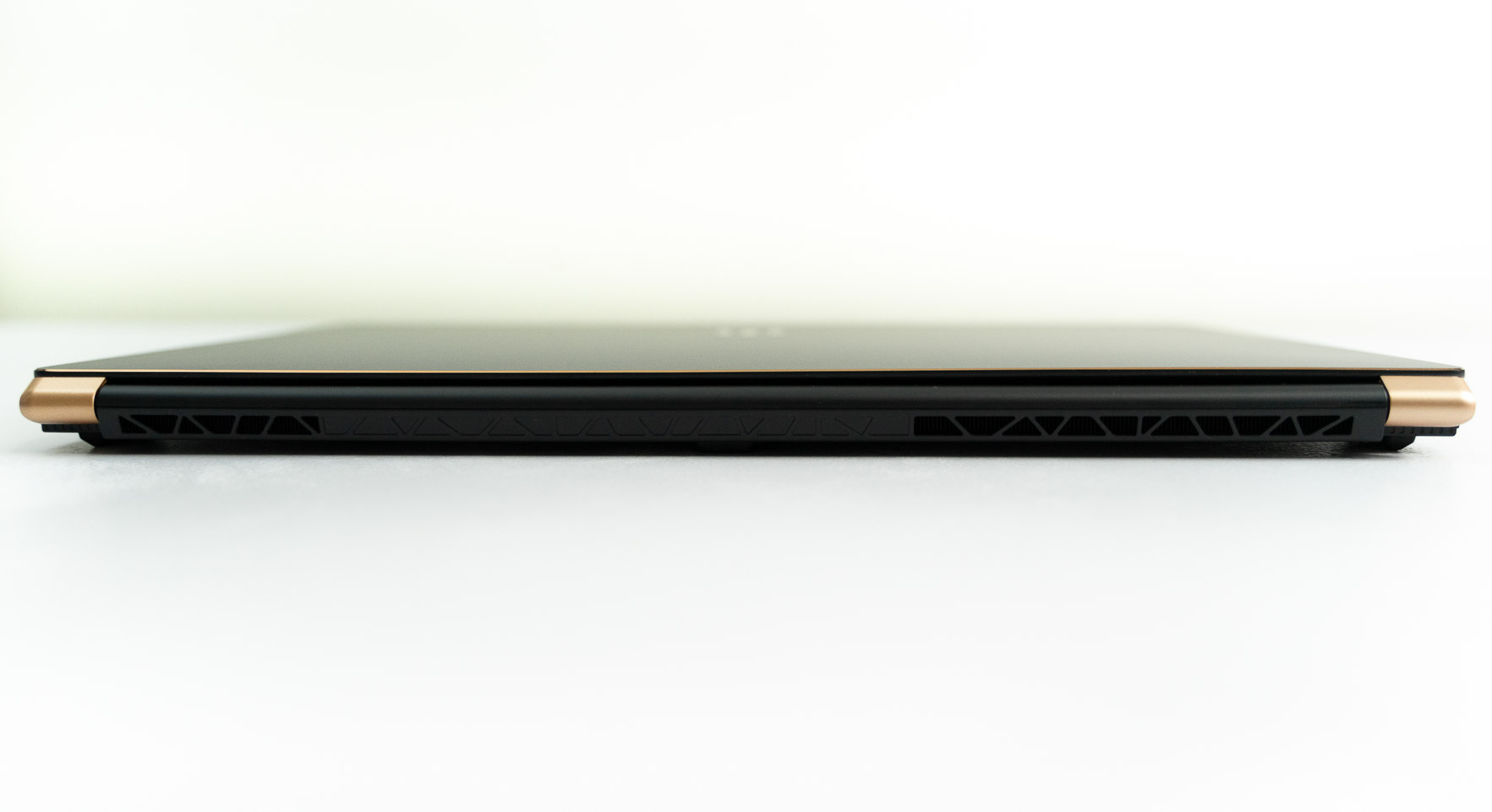 You’ll be greeted with a galvanizing 17” display upon lifting the lid. The display’s hinge doesn’t rotate 360 degrees–that would be both clunky and impractical due to its size and lack of a touchscreen. 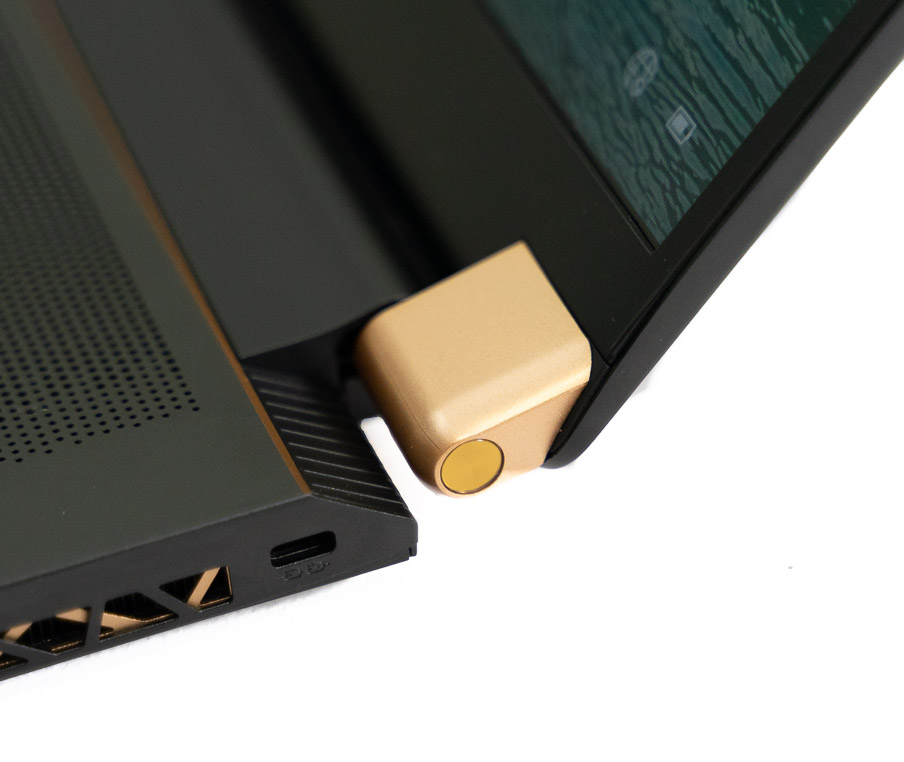 Workstation laptops generally include all the ports a user may need. The MSI WS75 comes with an HDMI port, an RJ45 Ethernet jack, three USB-A 3.2 Gen2 ports, one USB-C 3.2 Gen 1 port, a Thunderbolt 3 port, a micro SD card slot, and dedicated 3.5mm microphone and audio jacks. 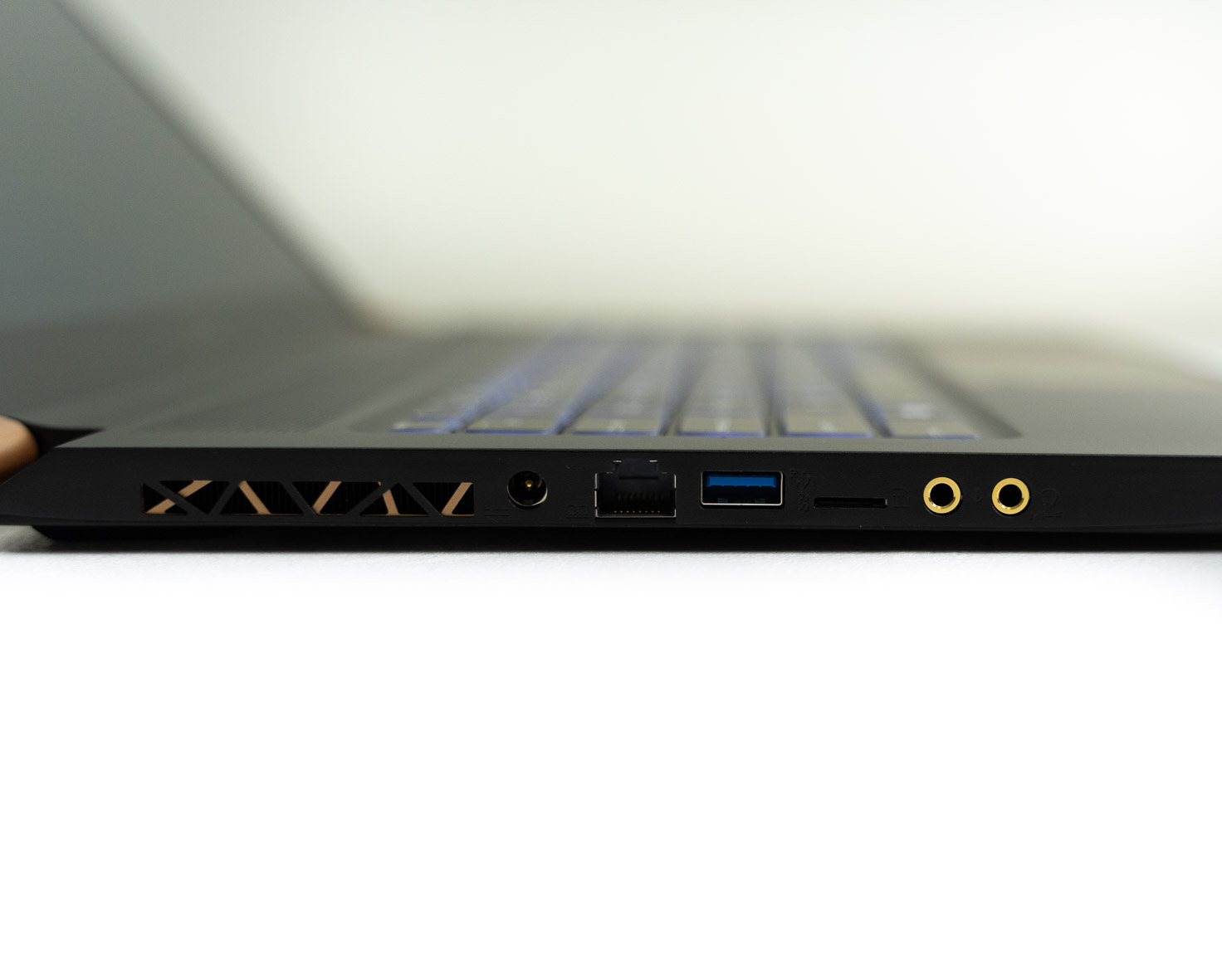 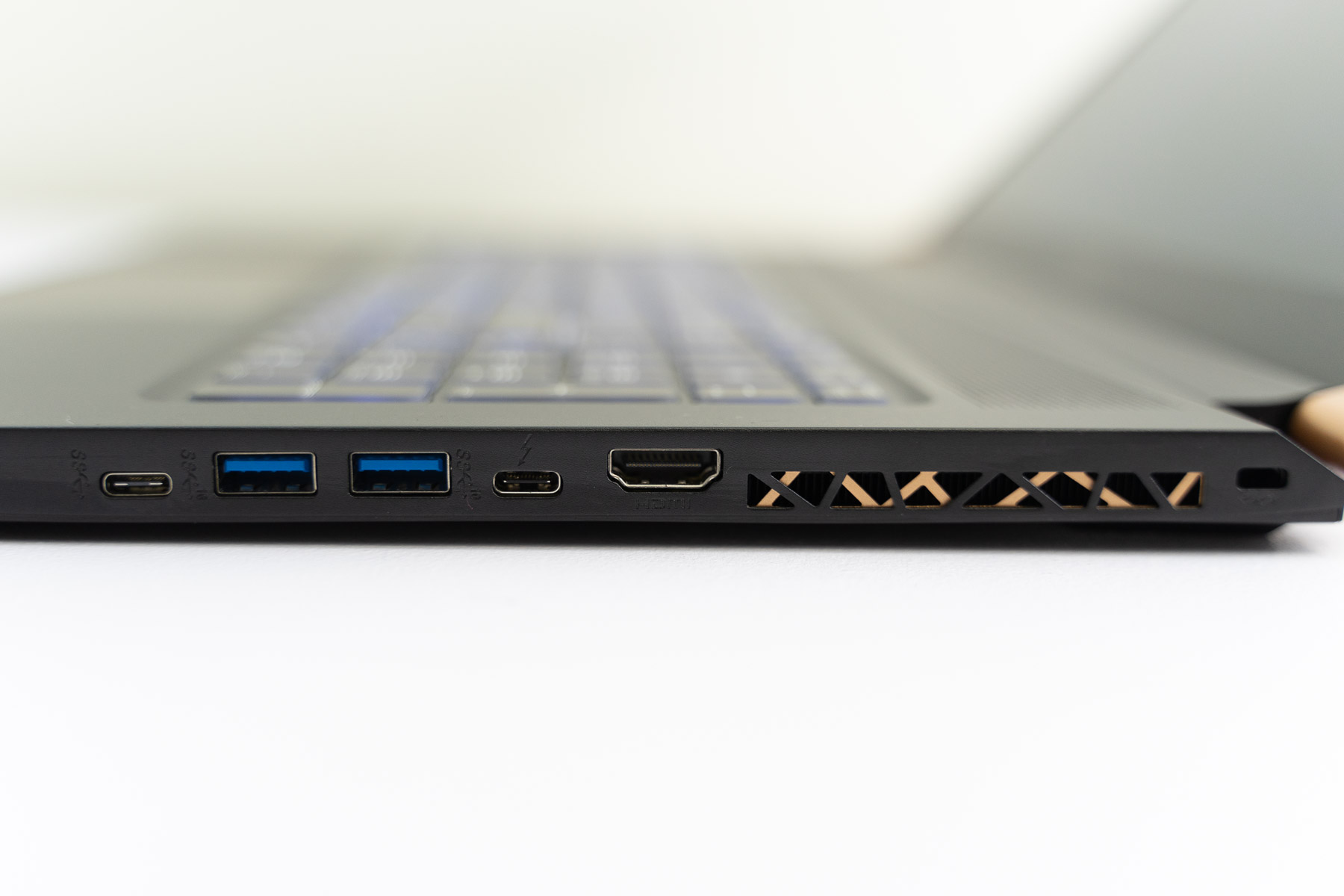 The meshed grill above the keyboard is actually for ventilation and not for speakers. The real speakers are tucked away on the underside of the wrist rest. 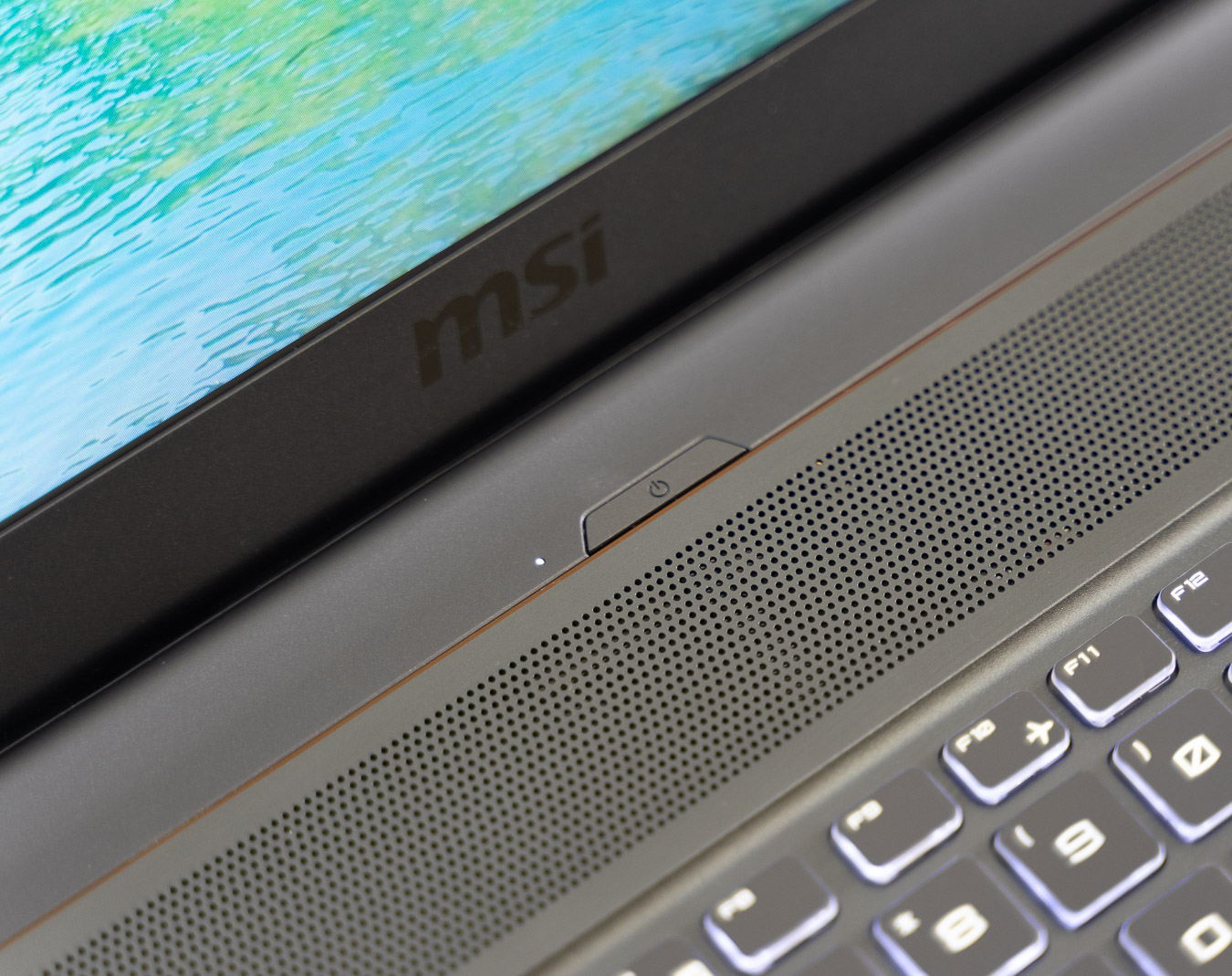 Embedded in the center is a full-sized ANSI keyboard completed with a number pad. Directly below is a long slab of a touchpad with a fingerprint sensor embossed on the top left. 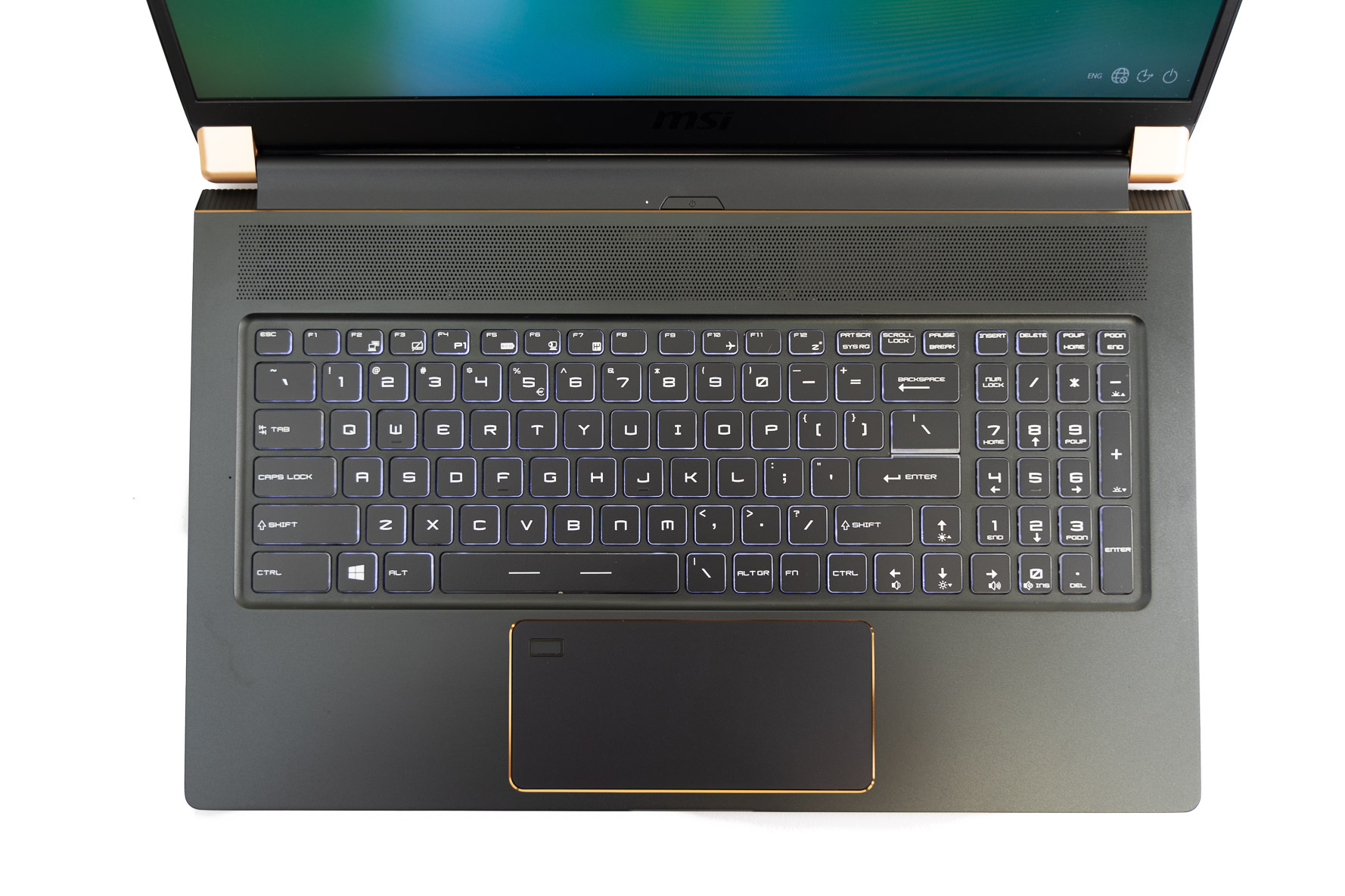 There’s plenty of ventilation grills at the base. 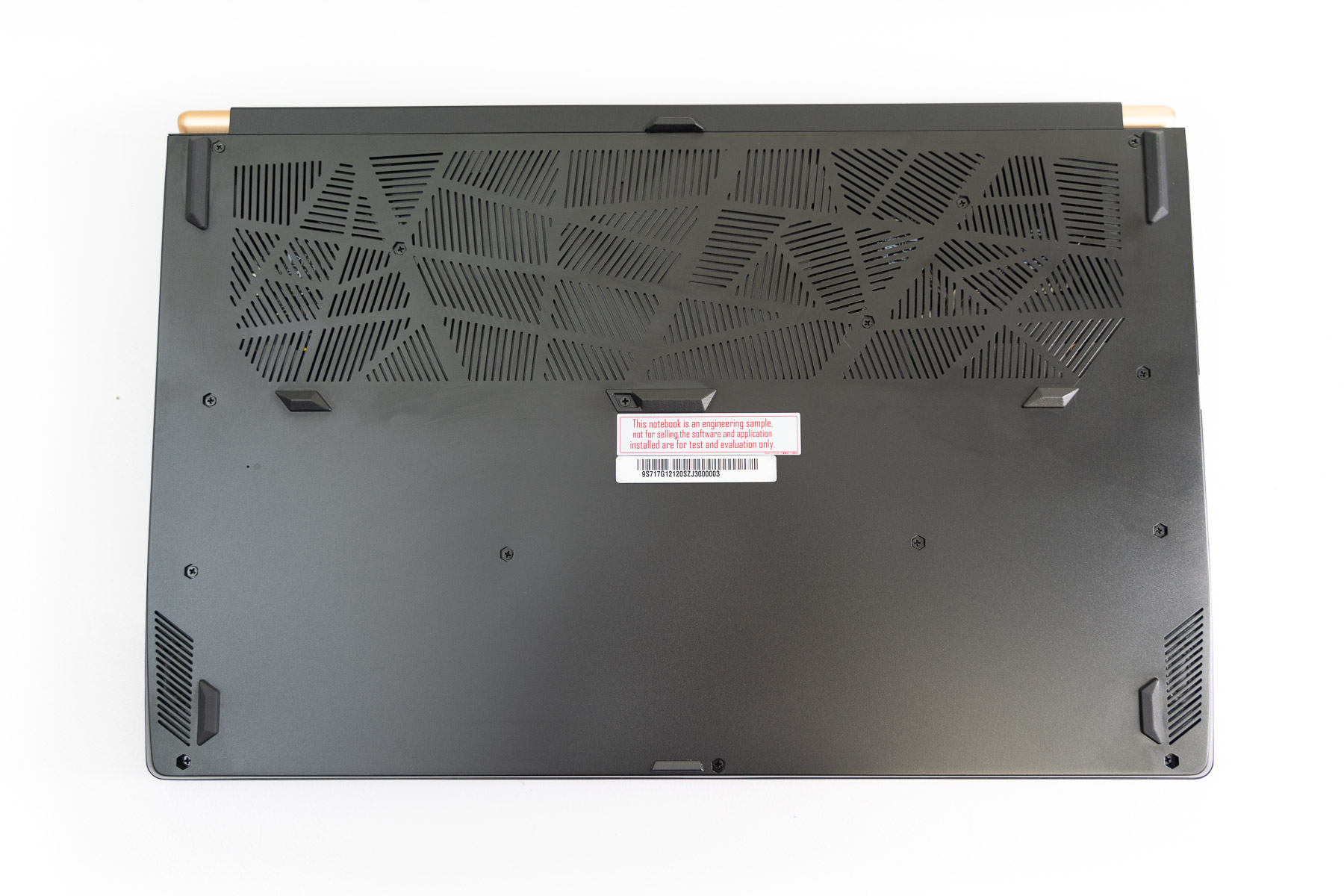 MSI didn’t hide any screws under rubber feet, so removing the rear panel was a cinch. The WS75 comes with three fans–a rarity even for workstations. While most of its components are covered to prevent tampering, the two M.2 SSD bays are still exposed. I do wish the RAM slots were more readily accessible, though. 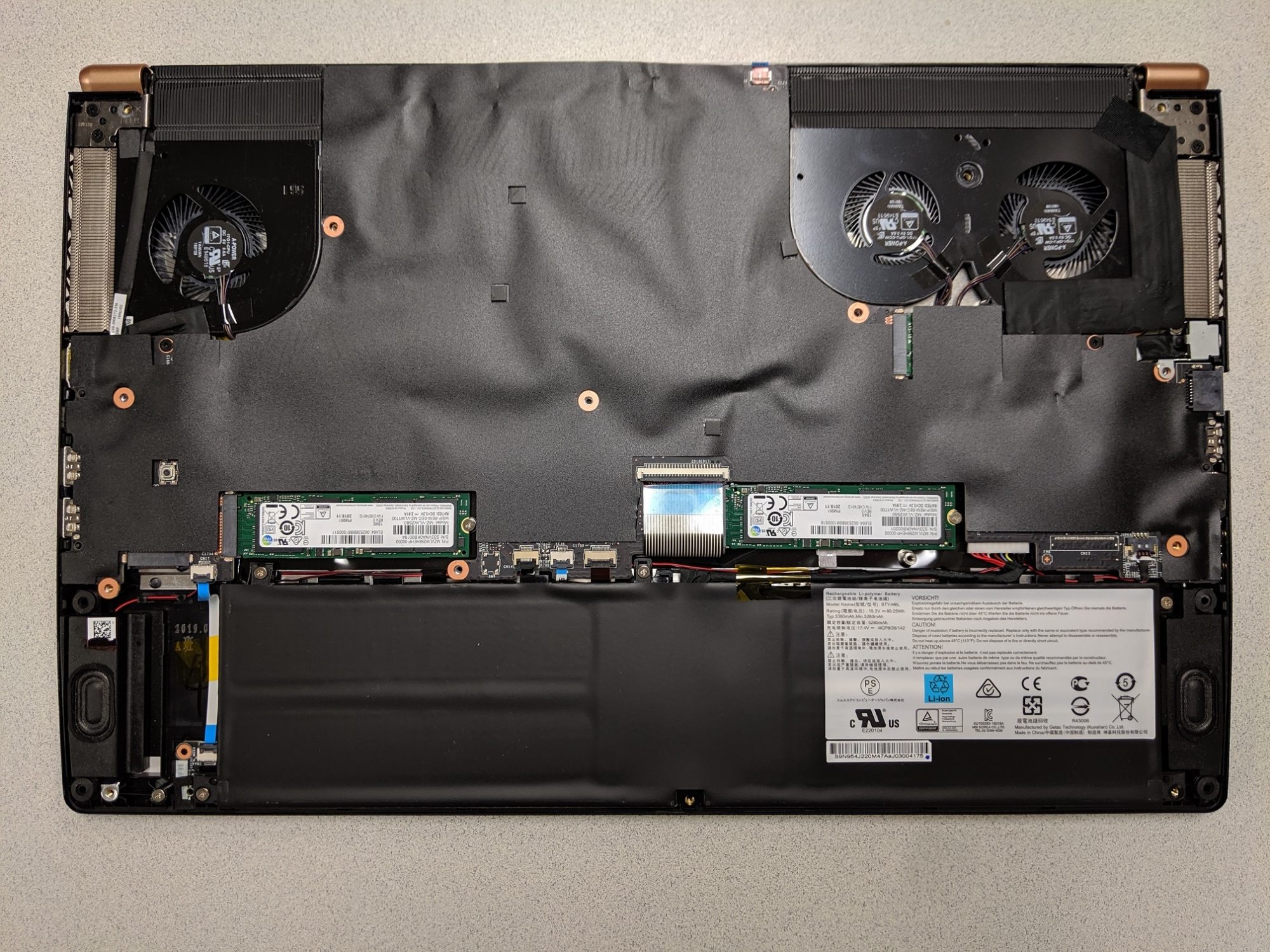 Coming with a 17” 1080p IPS display, the WS75 provides a superbly comfortable viewing experience. Although it omits a touchscreen, the display is coated in a matte finish to combat glare and minimize fingerprints. A webcam can be found embedded at the top of the thin bezels. 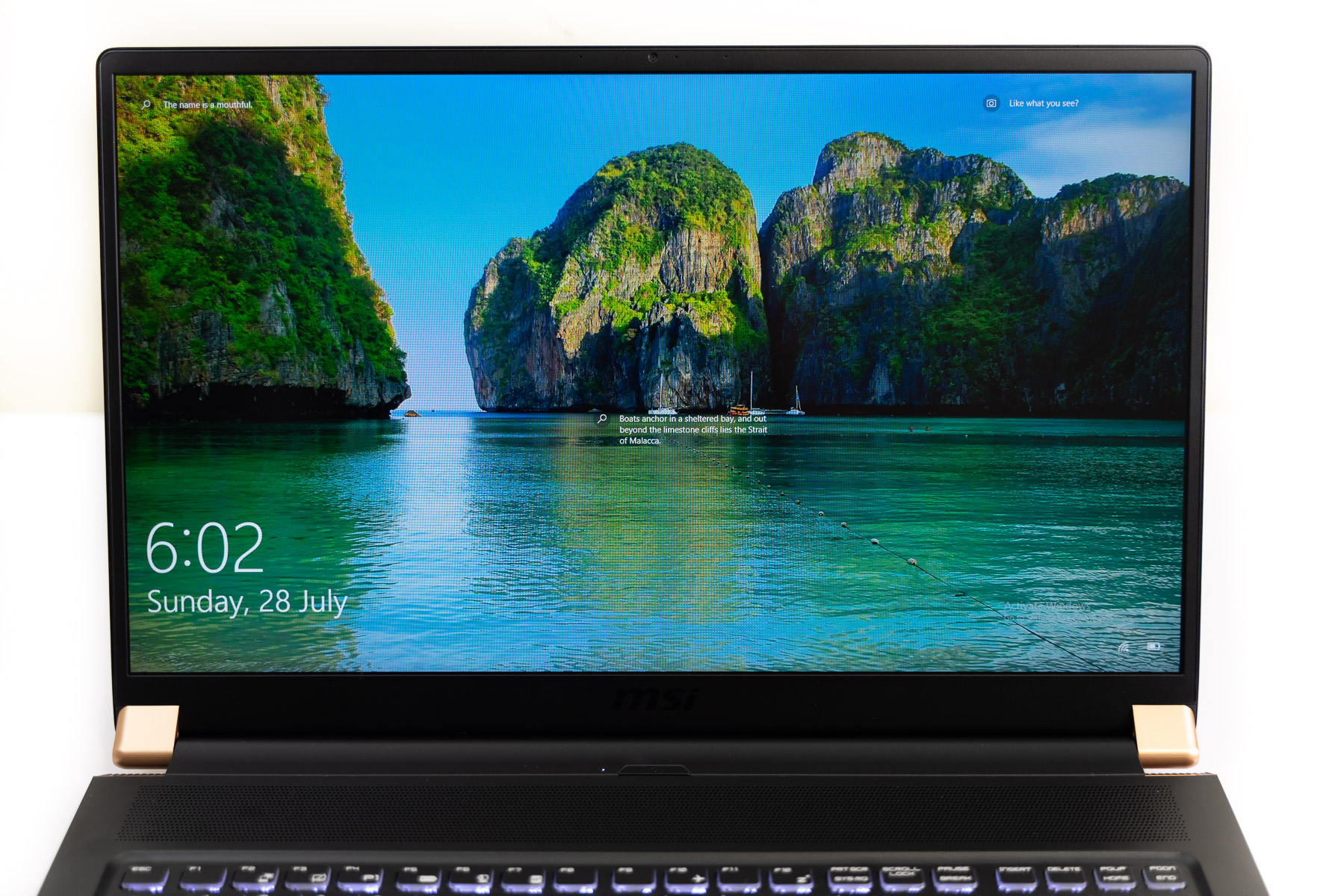 For reasons unknown, My Data Color Spyder 5 Pro colorimeter couldn’t save the calibrated color profile and was therefore unable to show us the color gamut coverage. With that said, colors seem impressively vibrant, with good contrast between darks and lights. It’s also very bright at maximum brightness so working in direct sunlight shouldn’t pose an issue.

I’m also surprised to find almost no light bleed. It’s barely noticeable, but a subtle light trail can be seen extending from the top edge. Yet, it in no way obfuscates the viewing experience.

Whereas the 8-core Intel processor has been used in gaming laptops before (like the MSI GS65 Stealth), Nvidia Quadro graphics are strictly reserved for workstation machines. In terms of the GPU–the chip that does the processing–the Quadros are practically identical to their gaming counterparts.

The difference lies in their drivers. Gaming graphics cards have drivers that are optimized for fast refresh rate, high polygon count, and high visual fidelity. Workstation cards do the opposite, they tend to focus on larger polygons and high floating-point calculation performance. Their floating-point (numbers with decimals) performance–specifically in FP32 double-precision–is also significantly higher due to enabling features that have been disabled on gaming cards.

Now onto the graphics card itself. The Quadro RTX 3000 is an entry-level workstation card based on the Nvidia TU106 GPU–the same one used in the RTX 2070 laptop gaming card. It features 6GB of GDDR6 memory as well as ray tracing and tensor cores for real-time ray tracing and Deep Learning Super Sampling (DLSS). Its memory bandwidth is slightly narrower than the RTX 2070, however.

I tested the WS75’s performance in Performance, Balanced, and Super Battery modes. All tests were conducted with the unit plugged in and battery at 100 per cent.

Cinebench measures CPU performance by using the processor to render a scene. In high-performance mode, it churned out a very respectable score of 3,014, just about the same as an AMD Ryzen 1700X desktop processor. When dialed into Super Battery mode, that score drops to 901. This will be a common trend throughout the rest of the benchmarks. 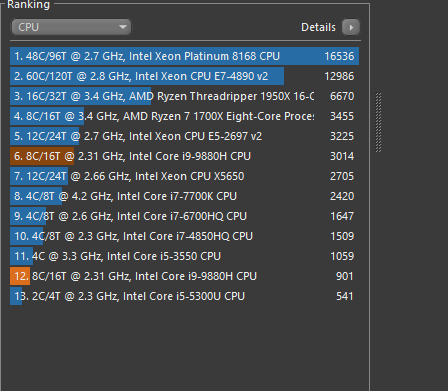 Scoring 5,625 in single-core and a whopping 29,919 in multi-core performance, the Intel Core i9-9880H processor comes within a hairbreadth of the 8-core, 8-thread Intel Core i7-9700K desktop processor. When turned to Balanced or Silenced mode, the processor scored identically as it did in High-Performance. 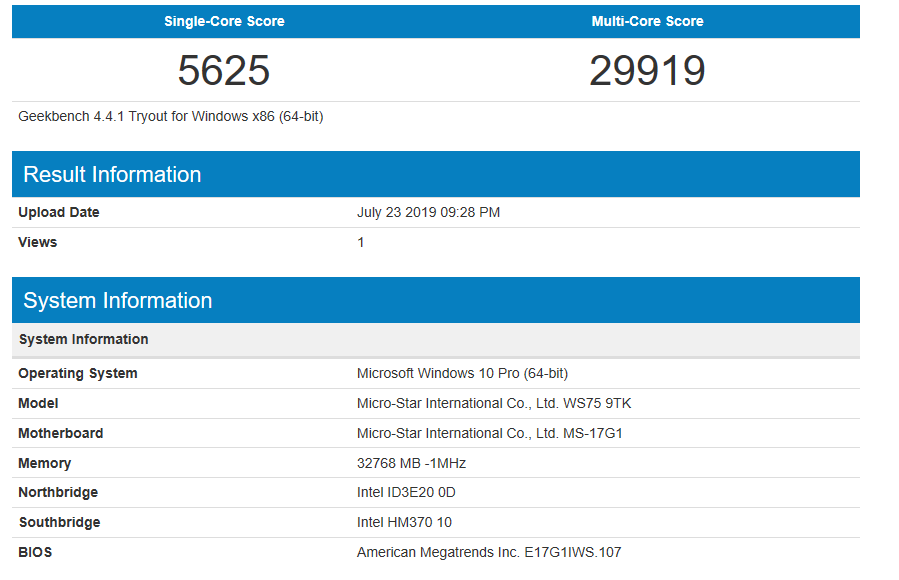 Turning on Power Saver mode caps all cores at 900MHz and reduces both the single-core and multi-core performance by 70 per cent. 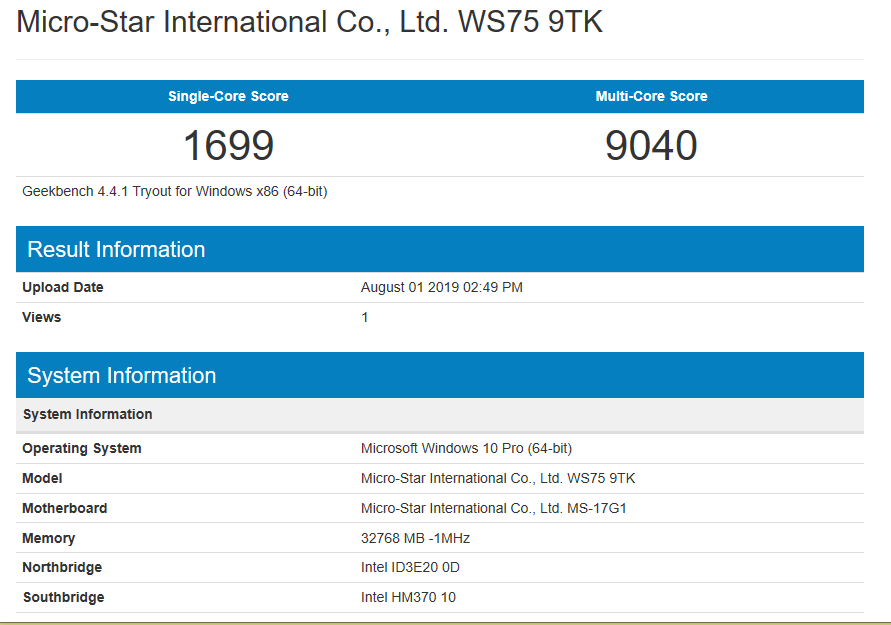 It’s unsurprising that the WS75 crushes through PC Mark 10, which evaluates system performance in a variety of productivity tasks. Since PC Mark relies on the processor for most of its tasks, the difference between High-Performance and Balanced power profiles isn’t as drastic.

Even when downclocked in Super Battery mode, the WS75 can still easily punch thorough daily workloads and web browsing. I personally prefer this mode as it keeps noise to a minimum when I’m writing.

Although the Nvidia RTX 3000 in the WS75 employs the same Nvidia TU106 GPU as the gaming-oriented Nvidia RTX 2070 notebook variant, it doesn’t fare as well in 3DMark, a benchmark focused on testing gaming performance. Whereas the GeForce RTX 2070 Max-Q scores around 7,500, the RTX 3000 only scored 6,093 in performance mode. Switching to Balanced cut the graphics performance by 66 per cent.

The graphics score didn’t fluctuate much in Super Power Save mode, although the processor score was significantly lowered.

We measured both drives in the laptop. The primary drive was shown to have better random writes at high queue depth.

Because workstation laptops are designed for entirely different workloads, we rely on SiSoft Sandra Lite to paint a general picture of how it performs in production, financial, and simulation scenarios. Like aforementioned, workstation-grade graphics use drivers that are specifically optimized for their intended workloads.

Because it’s unlikely anyone would ever select power-saving modes for heavy productivity, I’ve omitted it from testing. All tests except for Image Processing are conducted with high-precision FP32 data. In most benchmarks, setting the power profile to High-Performance significantly raises the score.

Impressively enough, the WS75 has three fans to dissipate heat. A dual-fan array at the top right spins at a lower rate on the opposite corner.

It’s clear that the WS75 prioritizes performance over acoustics in high-performance. All three fans proactively increased their speed to mitigate throttling as much as possible even at the slightest rise in temperature. Their moaning is an earful, but what you lose in blissful silence, you gain back in fantastic cooling; even at full throttle, the keyboard area was never hot to the touch. 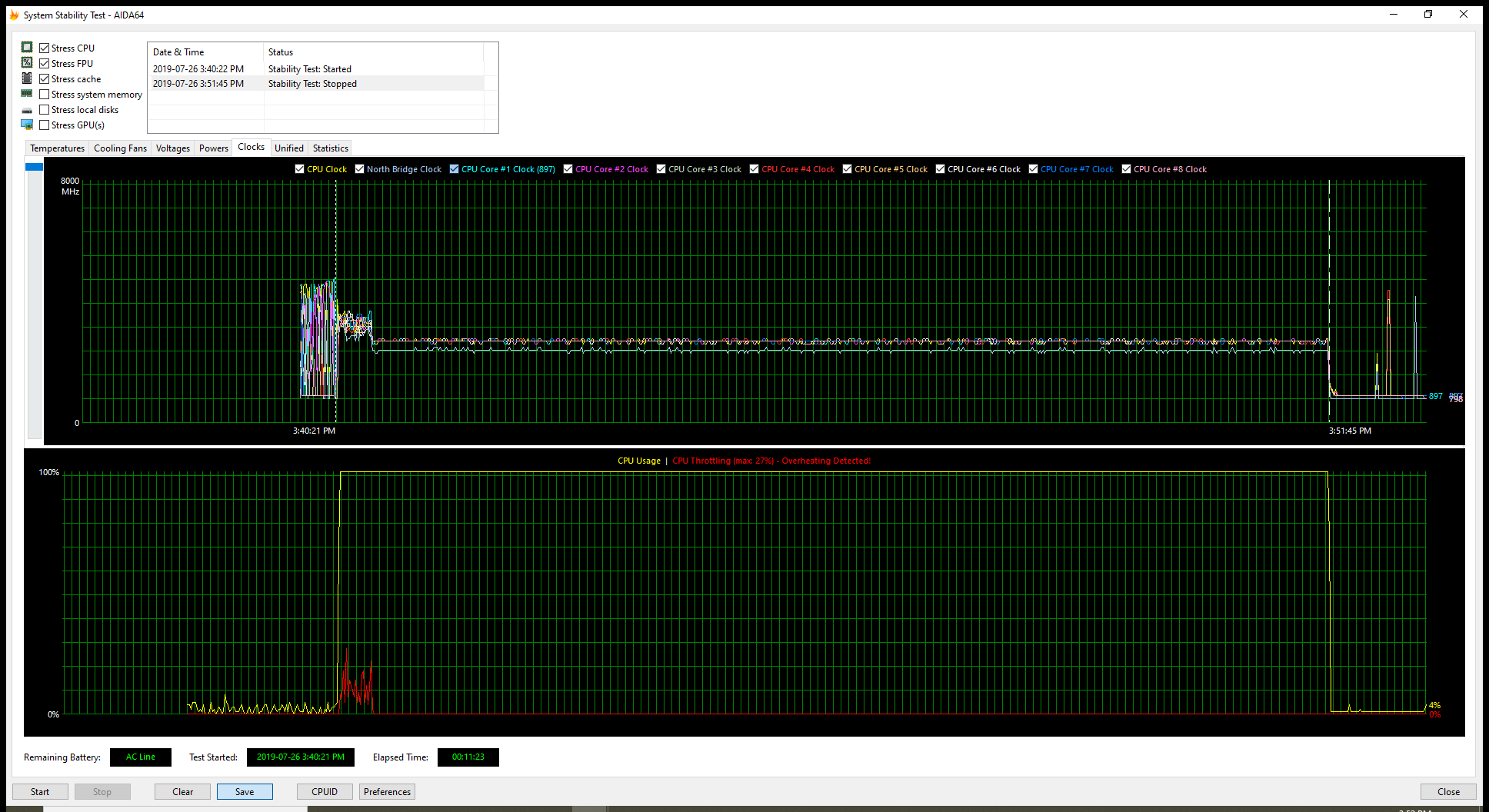 Stressing the processor using AIDA 64 shows how it throttles under full load. In multithreaded workloads, all cores can stay at peak clock for about a minute before leveling out at around 2.7GHz. At this frequency, the temperature level bounces between 70 to 80 degrees. 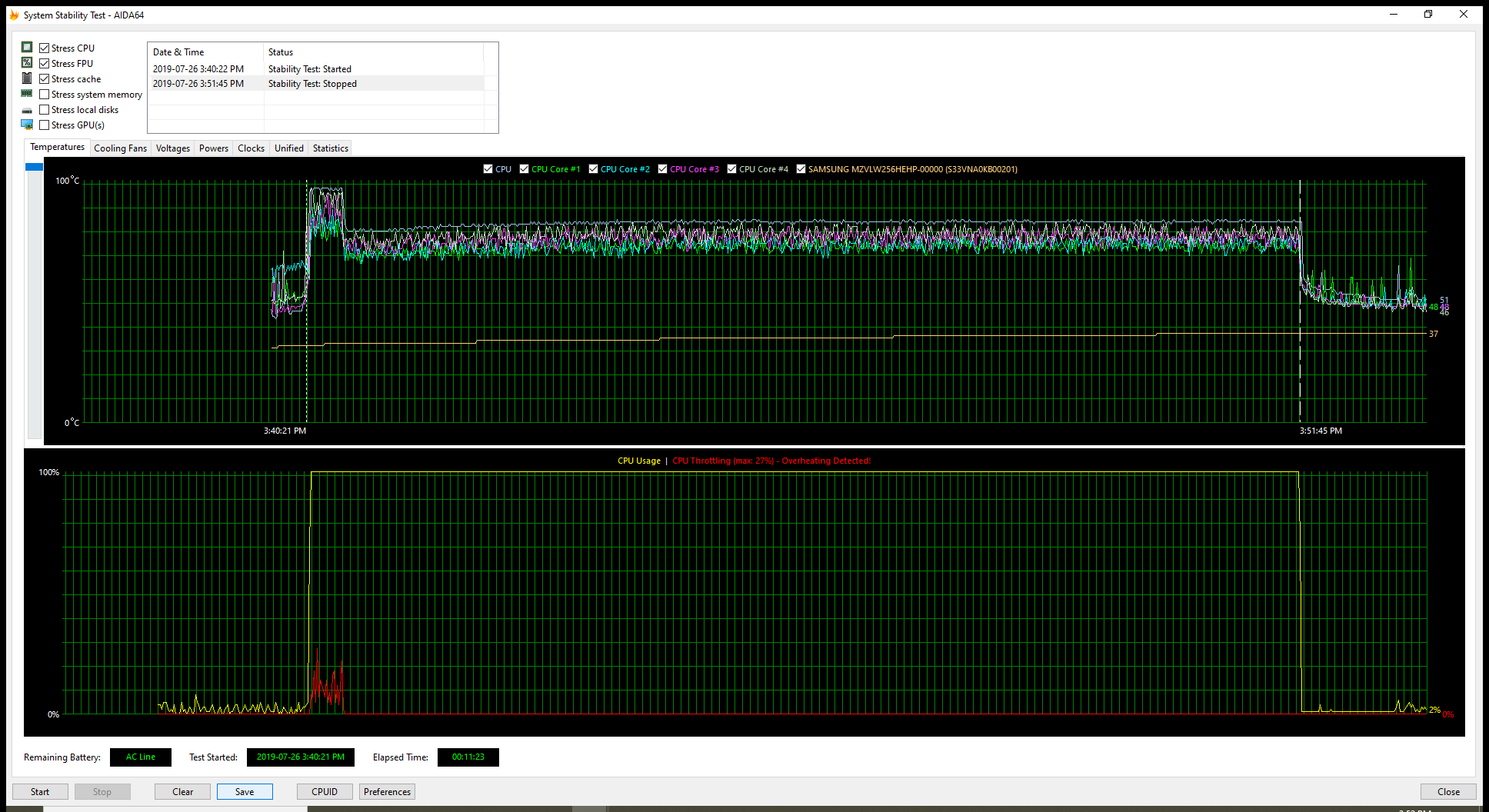 In Silent and Super Battery Saver modes, the fans are virtually inaudible even under load. And despite the severely limited processor and graphics performance, the WS75 can still easily handle daily productivity tasks.

A wide chassis often means a spacious keyboard. The 17” WS75 has one with a full number pad. The keys are springy, silent, and adequately spaced for a comfortable typing experience. It unfortunately omits the RGB backlight of its gaming counterpart and settles with plain white ones.

The landing strip trackpad is another story. While there’s plenty of navigation space, sensitivity is a bit too jumpy. It registered slides as clicks more than once. But the most painful thing is its placement and width. Situated directly in the area where the right palm rest is supposed to be, it’s nearly impossible not to bump the right click when typing. This was infuriating as it would summon context menus at random. 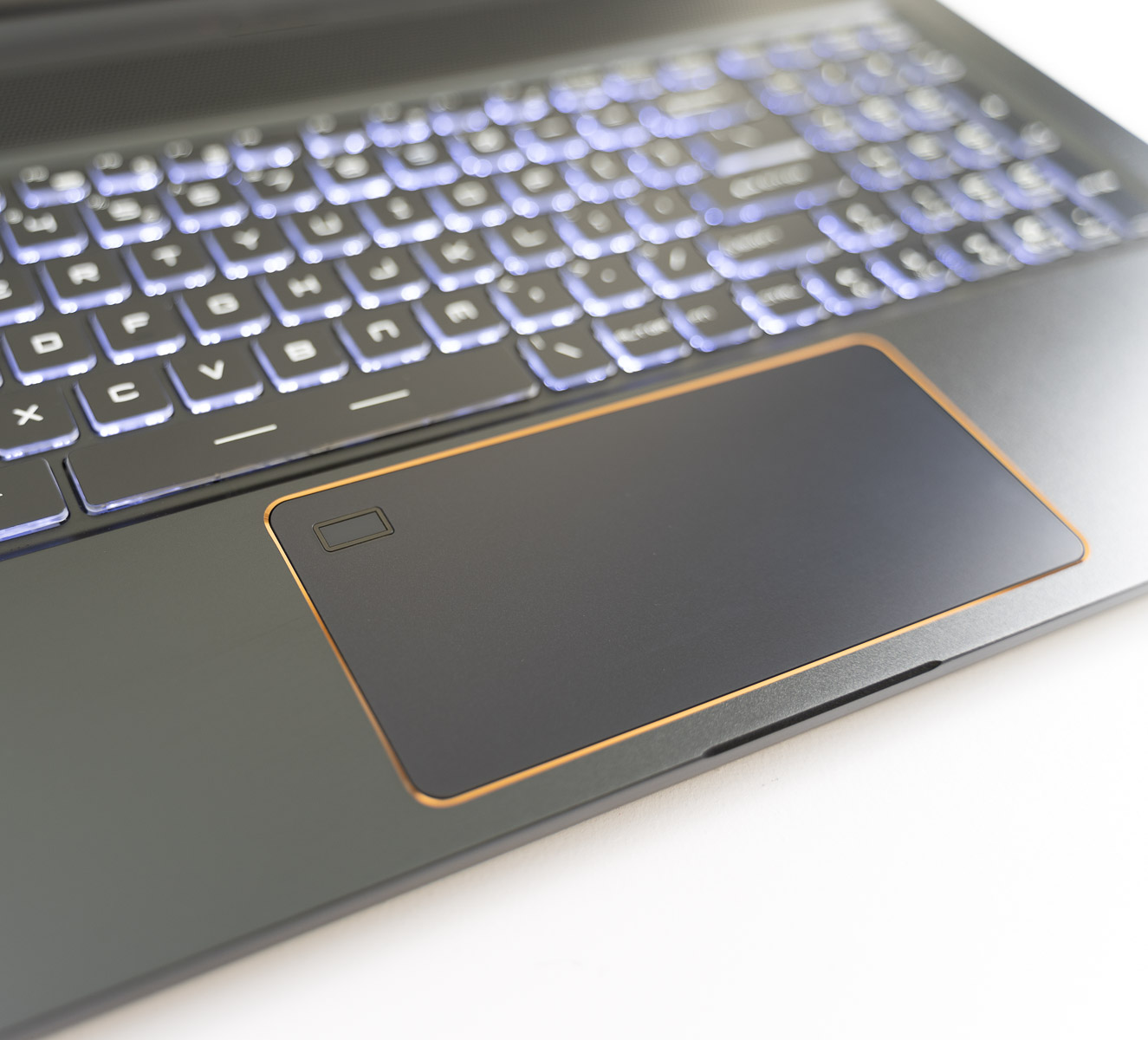 Powerful laptops have long been sufferers of poor battery life, but in 2019, the story has improved. With the power profile set to silent, I was actually able to eke out a few hours of web browsing and writing from its 82Wh battery. Endurance drops to only a couple hours on performance mode when editing pictures in Lightroom, however, and drops to just under an hour when stress-tested with benchmarks.

Workstation notebooks are rarely synonymous with sleek and thin, but the MSI WS75 stands as a pinnacle example of one against that current.

MSI’s decision to repurpose a proven chassis design for the professional space was an excellent one. It already solves much of the thermal considerations when designing a new laptop. Of course, part of its success is attributed to the advancement in microprocessor’s power efficiency over the years, but packing all that hardware into such a form factor was unthinkable just a few years ago.

Just as with all things, the more professional you get, the more expensive it becomes. At CAD$4,599, the MSI WS75 is for serious work only, and should not be purchased for daily productivity. Several units are available in different configurations in Canada, but I had a hard time finding one that’s identical to my review unit. The closest variant I could find carries the same processors, graphics, and RAM, but has 1TB storage, which drives up the price by $600.

Tom Li
Telecommunication and consumer hardware are Tom's main beats at Channel Daily News. He loves to talk about Canada's network infrastructure, semiconductor products, and of course, anything hot and new in the consumer technology space. You'll also occasionally see his name appended to articles on cloud, security, and SaaS-related news. If you're ever up for a lengthy discussion about the nuances of each of the above sectors or have an upcoming product that people will love, feel free to drop him a line at [email protected]
Previous article
Microsoft to drop Skype for Business Online and replace with Teams in 2021
Next article
Cohesity’s CyberScan app targets unpatched vulnerabilities in backups