PC vendor Acer has launched two new convertible notebook lines that make the transition between notebook and tablet configurations, and lots of states in between, using what it describes as an innovative new hinge design.

The two new lines are the Aspire R 13 and Aspire R14 Series convertible notebooks. The R 13 series features Acer’s Ezel Aero hinge that allows the device to rotate into six different positions, while the R 14 features a 360 degree dual-torque hinge for four different usage positions. They’re designed for users that want both a notebook and a tablet form factor in one device.

“Acer’s goal is to deliver an experience consistently beyond everyone’s expectation at all price points,” said Jason Chen, corporate president and CEO of Acer, in a statement. “These new Aspire convertibles are the perfect device to sit in the middle of your mobile world – a device that is both portable and capable of efficient productivity.”

The R 13 series notebooks measure less than one inch thin and weigh just over three pounds. They feature a 13.3” display and a dual-torque system hinge to keep it steady when used in touchscreen mode. For extra protection, the touchscreen and outer lid are encased in Gorilla Glass 3. Either super high-resolution (WQHD) (2560 x 1440) or full high-definition (FHD) (1920 x 1080) displays are available, and both feature anti-smudge technology.

Models are available with the latest Intel Core i5 or i7 processors, up to 1TB SSD storage and 8GB of memory. Availability is expected in October, beginning at US$899. 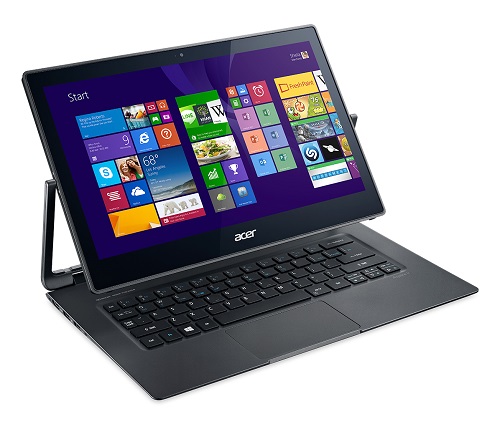 The R 14 line of notebooks feature a hinge design that allows them to be laid completely flat with no gap between the chasis and lid. The 14” HD (1366×768) display features Zero Air Gap technology to help eliminate reflections from sunlight.

Models are available with the latest Intel Pentium, Core i3, i5 or i7 processors, up to 12GB memory, Nvidia GeForce 820M graphics, and 500GB or 1TB hard drives. Availability is expected in October, starting at US$599.