New daily malware count was on the decline in 2015: Kaspersky

Malware, it seems, has peaked – at least in the number of novel files.

These numbers come from Kaspersky’s own daily detections.

Kaspersky cautioned that this was not an indicator of a safer cyberspace, however. In fact, the number of users targeted has increased by five per cent. 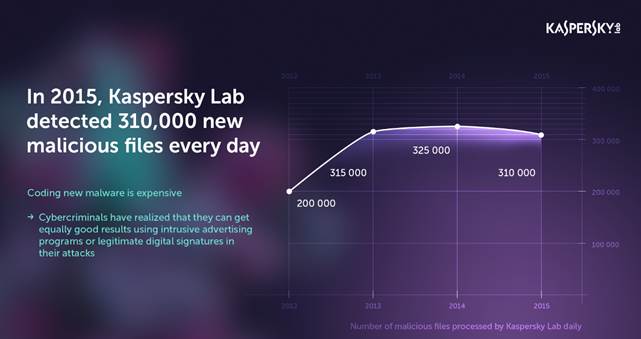 As indicated by the chart, 2012 to 2013 saw the most dramatic jump in malware proliferation.  The following year saw a significant slowdown, which the security vendor attributes to market saturation.

“Coding new malware has become expensive and cybercriminals have realized the benefits of using intrusive advertising programs or legitimate digital signatures in their attacks,” Kaspersky said in a statement. “Cybercriminals in search of a quick return appear to have decided that complex coding tools such as rootkits, boot kits or replicating viruses, may bring results, but can cost tens of thousands of dollars to develop, reducing their overall margins and revenue.”

Instead, some hackers are turning to selling adware along with quasi-legitimate commercial software and activity. Cybercriminals who are sometimes state-sponsored are also making more use of bought or stolen legal certificates for digital products to help them bypass security software.

“Cybercrime has lost the last touch of romance,” Vyacheslav Zakorzhevsky, anti-malware team lead at Kaspersky Lab said in a statement. “Today, malware is created, bought and resold for specific tasks. The commercial malware market has settled, and is evolving towards simplification.”

CDN Staffhttps://channeldailynews.com
For over 25 years, CDN has been the voice of the IT channel community in Canada. Today through our digital magazine, e-mail newsletter, video reports, events and social media platforms, we provide channel partners with the information they need to grow their business.
Previous article
Why are Alberta doctors not using email?
Next article
IBM unveils security analytics app platform