Dell has refreshed its workstation lineup, announcing new mainstream and performance tower and rack workstations with what the vendor promises is significantly improved performance over previous generation models.

New are the Dell Precision Tower 5810, Tower 7810, Tower 7910, and Rack 7910 models. They’ve been updated with the latest generation Intel Xeon processors and DDR4 memory, as well as new graphics technology from Nvidia and AMD. Aimed at customers in compute-intensive fields such as engineering, manufacturing, and media and entertainment, Dell says the new models double the amount of memory from previous generation workstations.

“From powering the designs of a leading surfboard maker to enabling the complex visual effects created by Academy Award-winning studio Framestore, Dell Precision customers depend on powerful workstations to help create beautifully complex projects,” said Andy Rhodes, global executive director for Dell Precision workstations, in a statement.. “Every key component of our new workstations has been updated, resulting in outstanding performance gains to help our customers design without limitations.”

The single socket Tower 5810 and high-power dual processor Tower 7810 are compact footprint models, while the Tower 7910 is the higher-end model, offering greater options for expansion and scalability with quick release hard drives and a tool-less, externally accessible power supply.

The new Rack 7810 has the same capabilities of the Tower 7810 but in a 2U rack form factor, and is Dell’s first workstation to have an Integrated Dell Remote Access Controller (iDRAC) for remote datacentre manageability.

All the new models feature next-generation Intel Xeon processors, can come with the latest AMD FirePro and Nvidia Quadro graphics, and can be configured with up to 1TB of DDR4 RDIMM memory. Thunderbolt 2 is also available, supporting data transfer speeds of up to 20Gbps.

The new models will be available in Canada through the Dell channel beginning Sept. 9. 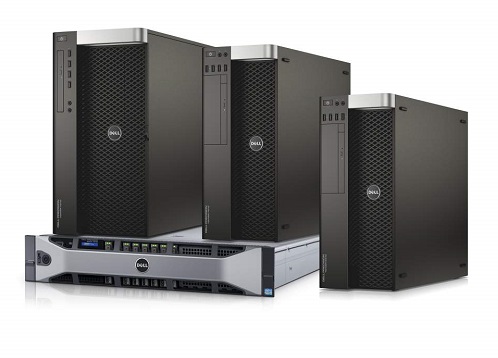 Jeff Jedras
A veteran technology and business journalist, Jeff Jedras began his career in technology journalism in the late 1990s, covering the booming (and later busting) Ottawa technology sector for Silicon Valley North and the Ottawa Business Journal, as well as everything from municipal politics to real estate. He later covered the technology scene in Vancouver before joining IT World Canada in Toronto in 2005, covering enterprise IT for ComputerWorld Canada. He would go on to cover the channel as an assistant editor with CDN. His writing has appeared in the Vancouver Sun, the Ottawa Citizen and a wide range of industry trade publications.
Previous article
New displays effectively eliminate backlight flickering
Next article
Microsoft Canada’s newest retail store comes to Calgary