Dell EMC unveiled a range of updates to its products and services during its Nov. 8 quarterly partner briefing, including changes to its tiered partner program.

In particular, the company has unveiled new target threshold numbers after three successful quarters of its new channel partner program that will come into effect on Feb. 2, 2018 for FY19. Dell EMC will be auditing all of its partners starting in December 2017 to see how they performed throughout the last 12 months and to determine where they will fall on the upgraded tiered scale.

While Dell EMC could not share Canada-specific figures, vice president of global channel programs, Kimberley DeLeon, provided the below example to show what changes were made to US-only partners:

DeLeon told CDN that for more information, partners could find the new thresholds in the Requirements and Benefits Documents section on the company’s partner portal, which was made available as of Nov. 8. 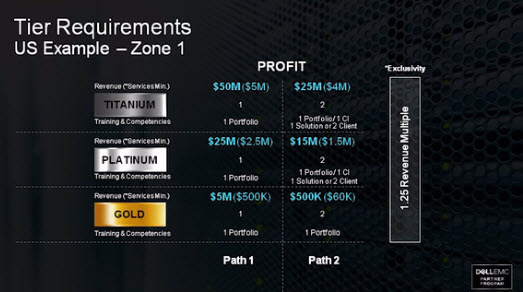 She said that each of Dell EMC’s eight global zones were evaluated based on market dynamics and level of competition before threshold numbers were adjusted. The company will be aligning to a single revenue number as a way to live up to its “simple, predictable, profitable” motto, she added.

However, there will be additional changes specifically to the services revenue threshold for partners in the US only, due to how Dell EMC applies discounts and reports revenue.

“There is a downstream effect to the services targets we originally set. By no means is this a signal that we are lowering the bar for attaching services. We’ve tailored details to your country zone that you can easily find your program requirements located in the benefits and requirements document on the partner portal [on Dell EMC’s website],” DeLeon explained.

In fact, she said 50 per cent of Dell EMC’s partners grew in the first half of the year, equaling approximately 20,000-plus net new customers and showing that the company’s partners “have been taking advantage of [Dell EMC’s] new business incentives,” DeLeon added.

Dell EMC also rolled out a new services accelerator, which gives partners 1.25 credits towards climbing the tiered partner program for every dollar of services revenue that they sell.

“For our partners selling a lot of services, this accelerator can help them achieve a higher tier, which is exactly what we want them doing,” DeLeon said to CDN. “We want every partner reaching a maximum tier and to do so by selling a ton of services. We want them to double down on services, and if they do so, they will be rewarded with the ability to rise up the tiers even faster.”

She continued to explain the reasoning behind maintaining two paths for the tiered partner program, one of which is heavier in revenue and lighter on training and number of lines of business required to sell. 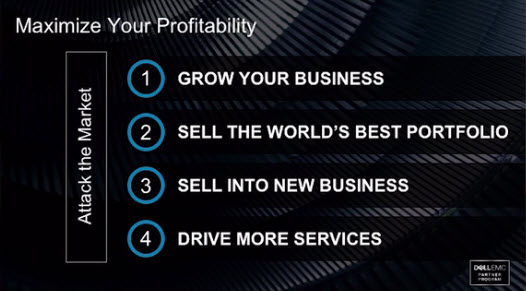 “We try to be as accommodating as we can to all types of partners, which is why we have the second path with a lower entry point from a revenue perspective. But it has heavier training requirements and it also requires partners to sell at least two lines of business, with the second needing to be a significant piece of their business,” she explained. “We understand that we have both global partners and smaller regional players, but we value them just as much.

Overall, the company’s global channels business was up by double digits in the first half of the year, global channel chief John Byrnes said during the earnings call, and distribution was up 11 per cent. Dell EMC has been gaining shares on its market competitors, and registered more deals – 140,000 new deal registrations per quarter – than it ever has before.

Mandy Kovacshttp://www.itwc.ca
Mandy is a lineup editor at CTV News. A former staffer at IT World Canada, she's now contributing as a part-time podcast host on Hashtag Trending. She is a Carleton University journalism graduate with extensive experience in the B2B market. When not writing about tech, you can find her active on Twitter following political news and sports, and preparing for her future as a cat lady.
Previous articleRola Dagher’s Power of 3 concept for the channel
Next articleBlackBerry betting big on channel partners